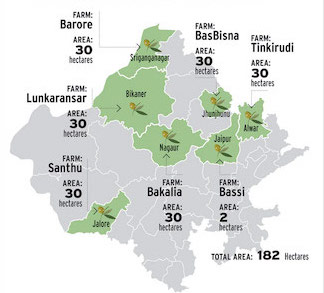 State Horticulture Department of Rajasthan government had initiated the olive cultivation project with technical support from Israel in 2008. Seeing the ample possibilities, the state government formed the Rajasthan Olive Cultivation Ltd (ROCL) in the public-private-partnership (PPP) mode. ROCL was incorporated on 19.4.2007 under the Company Act, 1956.

Olive cultivation in Rajasthan is at present spread over 800 hectares, of which 182 hectares is being undertaken by ROCL on Government farms in different agro-climatic regions of the state in districts of Sri Ganganagar, nagaur, Bikaner, Jalore, Jhunjhunu, Alwar, Jaipur.

Initially, seven varieties of olive — Arbequina, Barnea, Coratina, Picholine, Picual, Koroneiki and Frantoio — were imported from Israel and planted at these eight locations.

Rajasthan government, with Israel’s help, has set up a centre of excellence at Jaipur’s Bassi area to provide high-quality plants to the farmers. Additionally, the state government also provides subsidies on plant saplings, fertilizer and drip-irrigation systems.

The Indian state of Rajasthan is set to launch its own brand of olive oil under the name “Raj Olive Oil,” the first Indian olive oil produced within the country. The brand will be officially unveiled at the Global Rajasthan Agri-tech Meet (GRAM) in Jaipur on November 9.

On an average, an olive plant needs 10-15 litres of water per day.

India is experiencing rising demand for olive oil and imports are expected to rise by 20 percent. According to the ROCL, India currently imports 14,500 tons of olive oil from Spain, Italy and Greece. Domestically-produced olive oil can reduce the need for imports and offer Indian consumers a high-quality product at cheaper market prices compared to imported oils.

Olive cultivation has potential of increasing farmer’s income to 3-4 Lacs/hectare against 1 lac that one gets from cultivation of Bajra.