Following the demonetization of old 1000 & 500 rupee notes, black money, black economy and other relative terms have been making daily appearance in the news rooms and paper. Hence, it becomes quintessential to understand these concepts, why they matter and their inter-relationships.

Black money refers to funds that have been:

1.  Earned through without paying due taxes

Black money refers to funds that have been earned without paying due taxes. Example: When real-estate transactions occur usually value that is placed on paper and stamp duty is paid is much less than actual transaction value. The rest of the fund that seller gets is black money. It also includes any money that is paid through bribes, fees etc which have not been disclosed to Income tax department. Hence, black money can be earned through legal trades when transaction details are not declared to Income tax department or Sales tax or other relevant government department.

100 percent of money earned through activities that are illegal like selling narcotics drugs, form part of black money.

Following are some of the mechanisms through which black money is circulated, utilized and the profits earned are further invested in other sectors to generate further money: 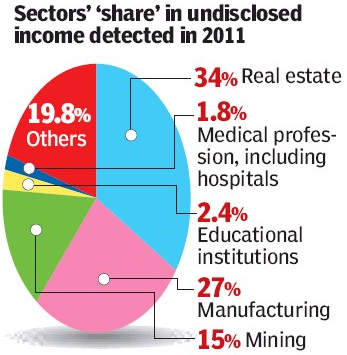 As per the report of Wanchoo Committee, the principles causes of tax evasion and the creation of black money and its proliferation are:

Black market, black economy, or shadow economy is a secret market or transaction which has some aspect of illegality or is characterized by some form of noncompliant behavior with an institutional set of rules (taxes  are not paid). Hence, while real-estate is legal activity in economy, a part of real-estate belongs to black economy as taxes paid are less than actual transactions.

It also includes production or distribution of prohibited goods and services. Examples include the drug trade, prostitution, illegal currency transactions and human trafficking. 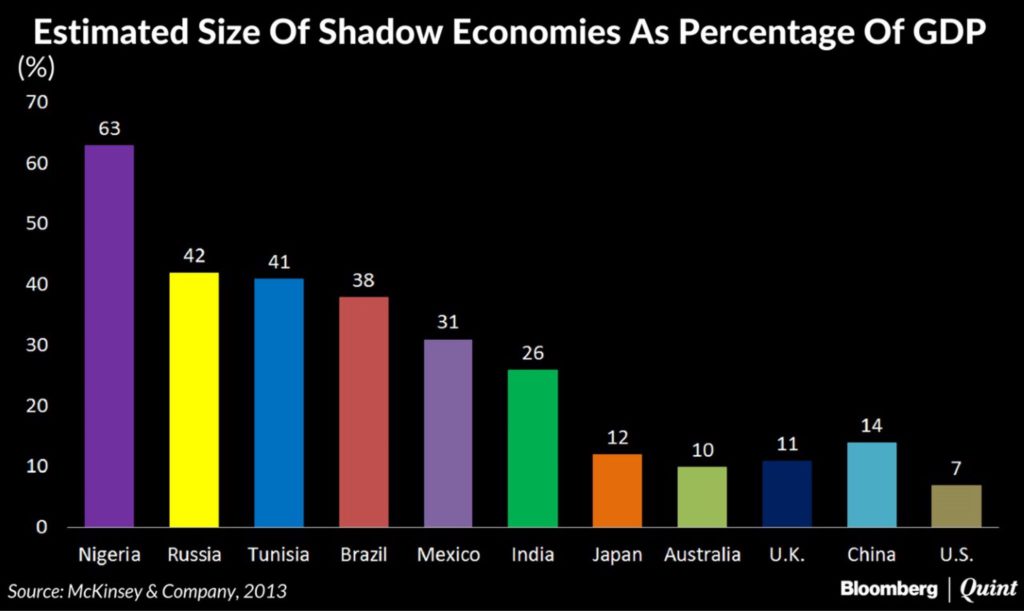 Informal economy includes those economic activities that circumvent the costs and are excluded from the benefits and rights incorporated in the laws and administrative rules. The informal sector is defined as the part of an economy that is not taxed, monitored by any form of government, or included in any gross national product (GNP), unlike the formal economy.  Activities & earnings of people like house-maids, local sabzi wala, construction labor who do actually legitimate business/activity but have no company, firm or personal PAN registration and do not report their transactions to government.

These people or agencies do not hide their income but since there are no rules/channels of reporting or their transactions/earnings are low value and they cannot bear cost of reporting. Hence these services, trades form part of Informal Economy which tough legal is accounted usually through indirect methods. Example: The value of flat sold accounts economic activity of labors (lets say its complete white transaction). As per an estimate, the informal sector in India accounts for about 45% of the gross domestic product (GDP) and nearly 80% of the employment(the wire).

The below image estimated informal economy/sectors in different activities: 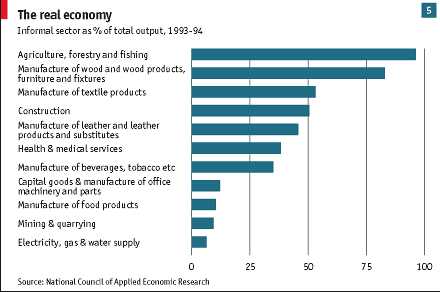