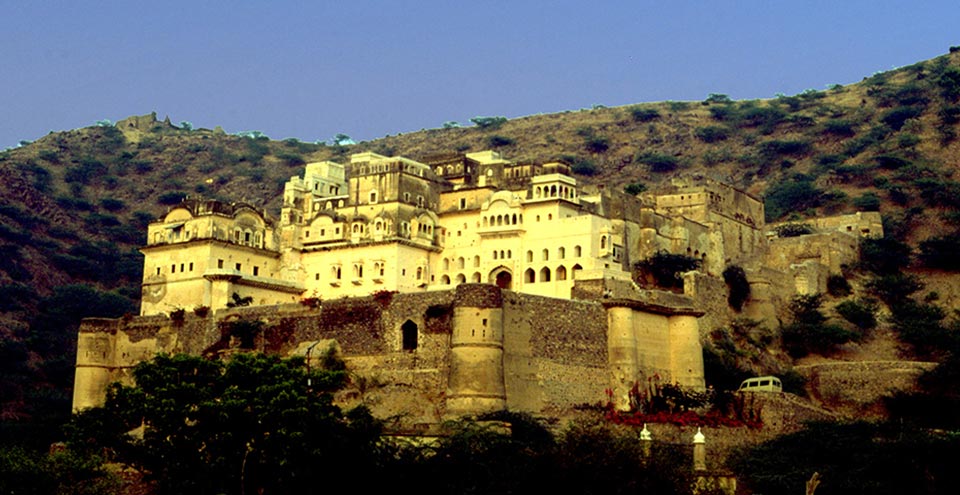 While considerable focus has been garnered on major historic imperial and provincial cities of India like Delhi, Jaipur, Jaisalmer, Udaipur, Ahmedabad, Lucknow etc., the smaller cities and towns spread across vast unvisited hinterland of India have received less than deserved attention of tourists, enthusiasts and scholars. Bundi erstwhile capital of Hada Rajput province known as Hadauti located in south-eastern Rajasthan, is one such place.

Known as the city of stepwalls, blue city and also as Chotti Kashi, the vast Architectural Heritage of Bundi includes majestic Garh Mahal along-with 4 Sagar Mahals, more than 50 Baoris, 20 kunds, 4 lakes and over 25 Darwaja’s and more than 100 Chattris & temples. The walled city of Bundi, with its narrow streets, havelis and coloured houses is in itself part of its built heritage. Consequently, the Architectural heritage of Bundi can be classified in six typologies: –

Taragarh Fort was constructed by Rao raja Bair Singh in 1354 on a hilltop 1426 feet high. In the centre of the fort is located Bhim Bhurj on which was once mounted a particularly large cannon called Garbh Gunjam, or ‘Thunder from the Womb’. With its curved roofs topping pavilions, excess of temple columns and elephant and lotus motifs, the palace is a tribute to Rajput style. The fort includes Hazari Darwaza, Haathi Pol, Nau Dhaan, Ratan Daulatkhana, Darikhana, Ratan Niawas, Chatra mahal, Badal Mahal & Moti Mahal.

The City of Bundi grew outwards Taragarh hill.  A small habitat developed at the foothills of the fort itself.  The location of the royal palace was on steep slope overlooking the valley below, providing a view of vast surrounding hinterland.  Garh Mahal became the focus and an imposing landmark on skyline of Bundi was visible from the valley below.  In the next 200 years the entire cluster was built.  Garh Mahal was reassuring sight for the residents of Bundi during turbulent times and Taragarh on top of the hill stood as guardian of the city.

A small, two-storied palace was a summer retreat of past rulers. Located on banks of JaitSagar lake, the palace was constructed by Rao raja Vishnu Singh in 1773 A.D.

Bundi has more than 50 stepwells and rightly known as city of stepwalls . Raniji ki Baori, also known as ‘Queen’s Stepwell’, is a famous stepwell built in 1699 by Rani Nathavati Ji, the younger queen of the ruling king Rao Raja Anirudh Singh of Bundi. This multi-storied stepwell displays excellent carvings of Gajraj with his trunk turned inwards, giving the impression of having drunk from the baori on its pillars. Its high arched gate gives it an inviting appearance.

As the name suggests, the 84 Pillared Cenotaph is a structure supported by 84 columns. Commissioned by Rao Anirudh, the Maharaja of Bundi, this cenotaph was constructed in memory of his nurse, Deva, under whose love and guidance the prince grew up. A popular tourist attraction, this impressive structure is decorated with carvings of deer, elephants and apsaras.

Darwajas in Bundi can be classified as: –