The cities of the Harappan Culture had declined by 1500 B.C. Around this period, the speakers of Indo-Aryan language, Sanskrit, entered the north-west India from the Indo-Iranian region. Initially they would have come in small numbers through the passes in the northwestern mountains. Their initial settlements were in the valleys of the north-west and the plains of the Punjab.

Later, they moved into Indo-Gangetic plains. As they were mainly a cattle-keeping people, they were mainly in search of pastures. By 6th century B.C., they occupied the whole of North India, which was referred to as Aryavarta. The original home of the Aryans is a debatable question and there are several views.

Why it is called Vedic Period ?

The word ‘Veda’ is derived from the root ‘vid’, which means to know. In other words, the term ‘Veda’ signifies ‘superior knowledge’. The Vedic literature consists of the four Vedas – Rig, Yajur, Sama and Atharva.

During the Rig Vedic period, the Aryans were mostly confined to the Indus region. The Rig Veda refers to Saptasindhu or the land of seven rivers. This includes the five rivers of Punjab, namely Jhelum, Chenab, Ravi, Beas and Sutlej along with the Indus and Saraswathi. 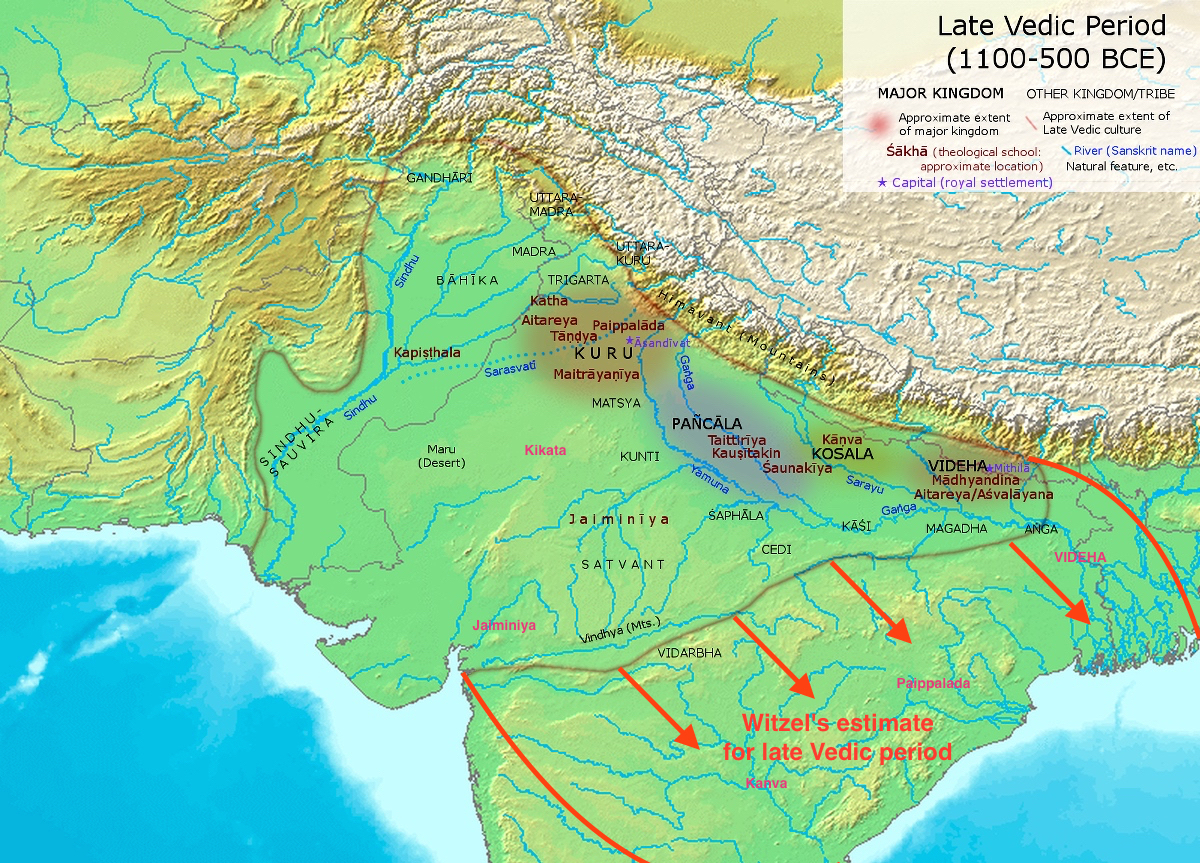 From 1000 BC, Iron was used in Gandhara in Pakistan. Around same time, use of iron appeared in eastern Punjab, Wester UP and Rajasthan. The Vedic literature mentions the Matsyas and the Salvas as located near the river Saraswati and there is evidence to believe that by the close of the Vedic age Rajasthan had become fully colonized by the  Vedic tribes.

The relics of Painted Grey ware culture have been reported from the dried- up beds of Saraswati and Drshadvati rivers. There is also evidence of Painted Grey Ware (PGW) from Noh (Bharatpur), Jodhpur (Jaipur), Viratnagar (Jaipur) and Sanari (Jhunjhunu). These sites represent the growth of Iron Age in Rajasthan.