The Office of the Registrar General & Census Commissioner, India has recently released the SRS Bulletin May 2019 which presents the estimates of Birth Rate, Death Rate, Natural growth Rate and Infant Mortality Rate (IMR) for the year 2017 for India and its States/UTs.

What is SRS Bulletin ?

The Sample Registration System (SRS) is a large-scale demographic survey for providing reliable annual estimates of Infant mortality rate, birth rate, death rate and other fertility & mortality indicators at the national and subnational levels.  Initiated on a pilot basis by the Office of the Registrar General, India in a few selected states in 1964-65, it became fully operational during 1969-70 with about 3700 sample units.

The field investigation consists of continuous enumeration of births and deaths in selected sample units by resident part time enumerators, generally anganwadi workers & teachers, and an independent survey every six months by SRS supervisors. The data obtained by these two independent functionaries are matched. The unmatched and partially matched events are re-verified in the field and thereafter an unduplicated count of births and deaths is obtained.

The sample unit in rural areas is a village or a segment of it (if the village population is 2000 or more). In urban areas, the sampling unit is a census enumeration block with population ranging from 750 to 1000. The SRS sample is replaced every ten years based on the latest census frame. The current Sample is based on the 2011 Census frame.

At present, SRS is operational in 8850 sample units (4,961 rural and 3,889 urban) covering about 7.9 million population, spread across all States and Union territories.

The SRS Bulletin May 2019 presents the estimates of Birth Rate, Death Rate, Natural growth Rate and Infant Mortality Rate (IMR) for the year 2017 for India and its States/UTs.

Birth Rate is a crude measure of fertility of a population and is a crucial determinant of population growth. The Birth Rate at all India level has declined drastically over the last four decades from 36.9 in 1971 to 20.2 in 2017.

For Rajasthan, the birth rate stands at 24.1

Rajasthan has achieved slow progress in bringing down mortality rate in comparison to national average. Recently released Centre’s Sample Registration System (SRS) shows the mortality rate in the state is recorded at six deaths per 1,000 people in 2017, which was seven in 2005.

While for men it is 6.6, for women it stands at 5.3. Mortality rate is defined as the number of deaths per 1,000 population in a given region and time period. Despite of the slow progress, the state is still faring better than the country.

As per SRS May 2019, Death rate is one of the simplest measures of mortality and is defined as the number of deaths per thousand population in a given region and time period. The death rate of India has witnessed a significant decline over the last four decades from 14.9 in 1971 to 6.3 in 2017. 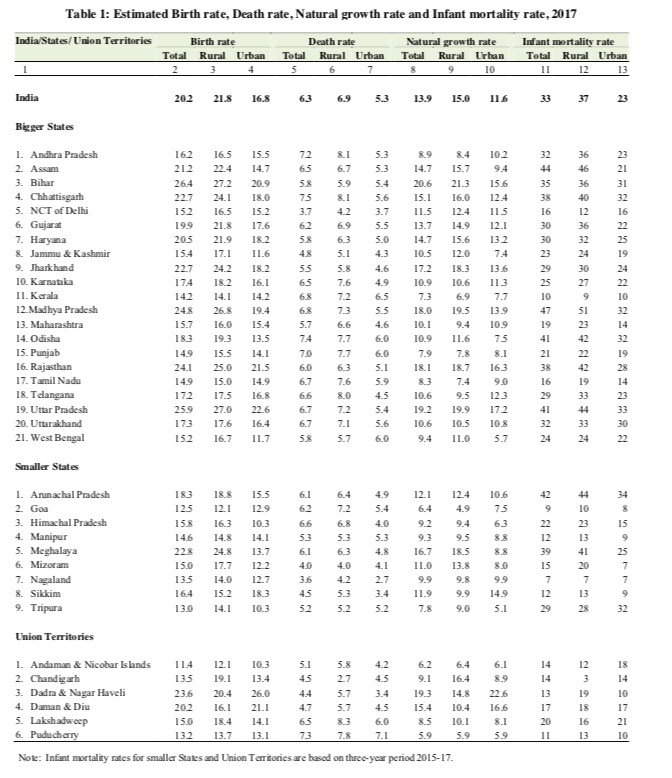