We all know artificial satellites that we send to space revolve around our plant earth. Now, the orbits used by these satellites are defined using equator as reference. Accordingly, we have three types of orbits:

More will be clear from Image below. 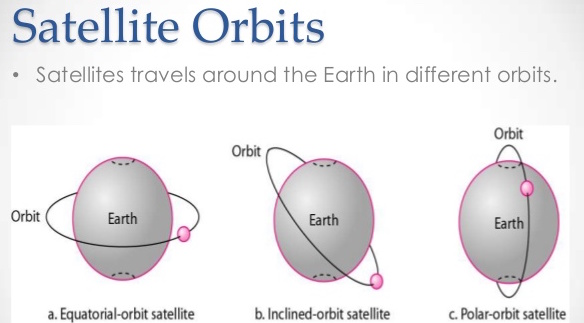 Note: Now, in any question, if it is given that satellite is geo-stationary, you should automatically remember than its height will be 3600 Kms

2. Why ISRO launch Sites are only on East coast of India and not on West coast?

Back to basic concepts:

1. NEWS items on Satellite – say – satellite contain so and so band transponders. What are the different bands used by ISRO?

Note 1: Now, wherever you see large dish – that dish works on L/S/C band

Back to Basic Concepts:

2. How many satellite are there in GPS system:

3. How many satellites are required to know the location of individual

4. What are other competing systems launched by different countries to GPS system.

Launch Vehicles are rockets that carry satellite to desired orbits. At present ISRO have 3 launch vehicles:

Development of future launch vehicles is also going on, with ISRO working on two Vehicles: