What is Sloth Bear?

There are actually three types of bear found mostly in India:

Out of these, Sloth Bear, is a nocturnal (activity during the night and sleeping during the day), insectivorous bear species native to the Indian subcontinent. In Gujarati it is called as Reechh & in Hindi as Bhalu. Identified as vulnerable species by IUCN, Sloth bears are the most widespread bear species in India. They like honey too. They are visible on the roads near the forest area at night. They are usually harmless and do not attack those even two metres away, but they can get ferocious if there are young cubs.

The major bear sanctuaries in India for conservation of sloth bears are:

Mount Abu wildlife sanctuary is located in Aravalli Ranges of Mount Abu. Declared a wildlife sanctuary in 1980, presently it has leopard has apex predator and other animals including  sambhar, jungle cat, small Indian civet, wolf, hyaena, jackal, Indian fox, common langur, wild boar,  pangolin, common mongoose, Indian hare, porcupine and hedgehog. However, the location is also ideal for sloth bear. After a census exercise this year, the forest department estimated that there are about 350 sloth bears in Mt Abu. Even though the Jessore Sanctuary is named after the sloth bear, the numbers of these creatures are higher in the Mt Abu area. (the recent news). 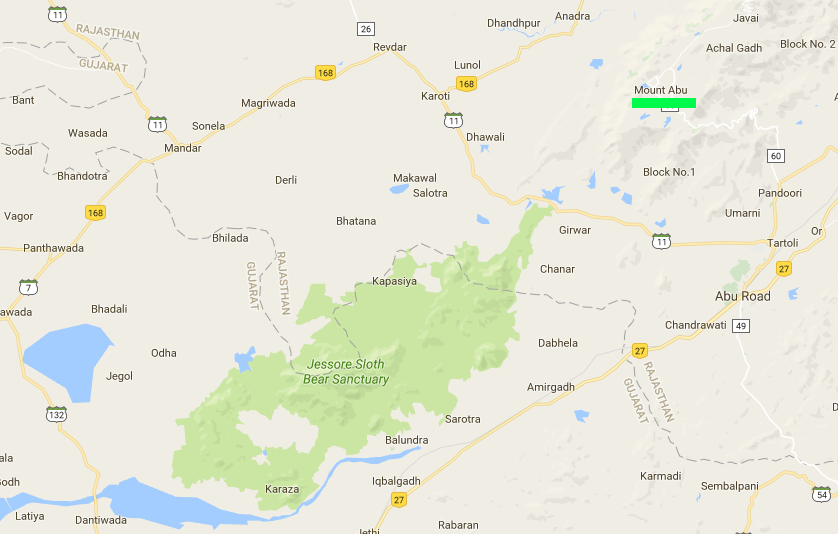 Jessore Sanctuary is situated in the Banaskantha district in Gujarat at the Gujarat-Rajasthan border.  The complete area between Mount Abu  and Jessore wildlife sanctuary is home to them. Apart from sloth bear, other fauna reported in the sanctuary are leopard, sambar, blue bull, wild boar, porcupine, and a variety of birds.