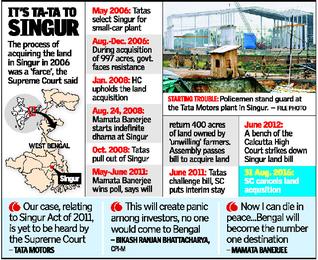 The present Mamta Banerjee government said though it is “completely understandable” for the government to acquire land to set up industrial units, the “brunt of development” should not be borne by the “weakest sections of the society, more so, poor agricultural workers who have no means of raising a voice against the action of the mighty State government.”

A Bench of Justices V. Gopala Gowda and Arun Mishra agreed to the view of present government and ordered to quash the acquisition process of the land and return it to thousands of short-changed landowners, farmers and cultivators, who have been fighting a prolonged legal battle for over 10 years.