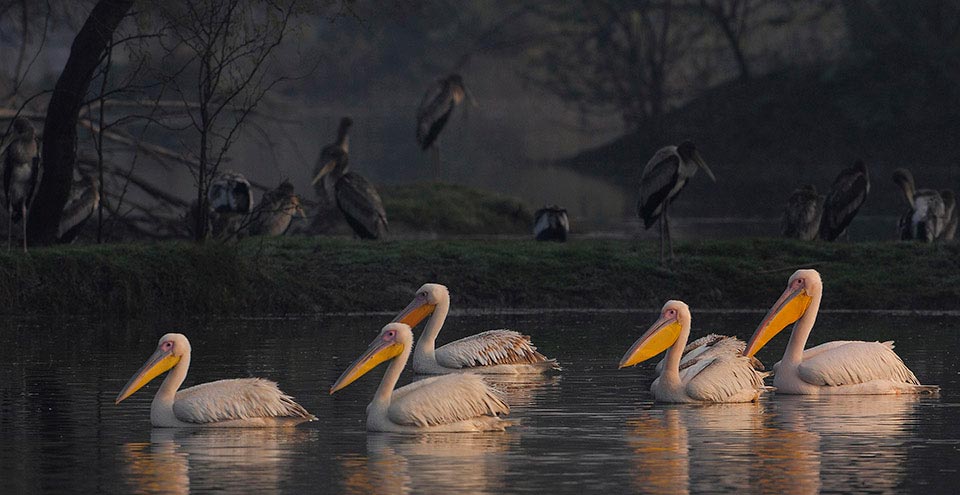 Keoladeo Ghana was a royal hunting reserve during the 1850s and was a game reserve for Maharajas and the British. The park was a hunting ground for the maharaja of Bharatpur, who turned his personal hunting domain into a bird sanctuary in 1956. Apart from setting up the sanctuary Maharaja of Bharatpur also built a dam and an artificial lake to store the water from monsoon rains.

The wetlands of Bharatpur were formed when Jat ruler Suraj Mal, who ruled the area between 1726 and 1763, flooded a natural depression by building the Ajan Bund. Water was fed into the marshes twice a year from inundations of the Banganga (North) and Gambhir (South) rivers nearby. A well-designed system of canals, sluices and dykes currently maintains the level of water in different blocks of the park.

Keoladeo Ghana wetland is a complex of ten artificial, seasonal lagoons, varying in size, situated in a densely populated region. The area was earler declared as a Wildlife Sanctuary and later upgraded as a National Park. It is a UNESCO world heritage site and included in Montreux Record. The wetland has also been included in wetlands under Ramsar Convention in India.

The park is located 2 kms south-east of Bharatpur and 55 km west of Agra. The Park is spread over 29 square kms area.

Nearby Places to See

The Wetland is a part of the Indo-gangetic Great Plains. It is a fresh water swamp and is flooded during the monsoon. For most part of the year, effective wetland is only 10 sq. kms. The rest of the area remains dry. Dykes divide the Wetland into ten units. Each unit has a system of sluice gatos to control its water level.

Depth of water ranges from 1 metre to 2 metre during rains (July, August and September). In subsequent months, October to January, the level gets lowered. The area starts drying from February. In May & June, the entire area dries. Water remains only in some depressions. This alternate wetting and drying helps to maintain the ecology of the fresh water swamp, ideal for water-foul and resident water birds.

Monsoon is the main source of precipitation, Major rainfall occurs in the months of July, August and September. Sometimes rain showers occur during December and January. Average rainfall is 662 mm.

It is a Reserve forest under the Rajasthan Forest Act, 1953 and, therefore, it is the property of the State of Rajasthan of the Indian Union.

Bird ringing operations have been carried out by the Bombay Natural History Society, for the last 40 years. The society has intensified their operations, Interesting discoveries have been made Limmological studies have be conducted by the Zoology Department of the University of Rajasthan, Jaipur. Monitoring of the population dynamics of birds has been undertaken by the Sanctuary management,