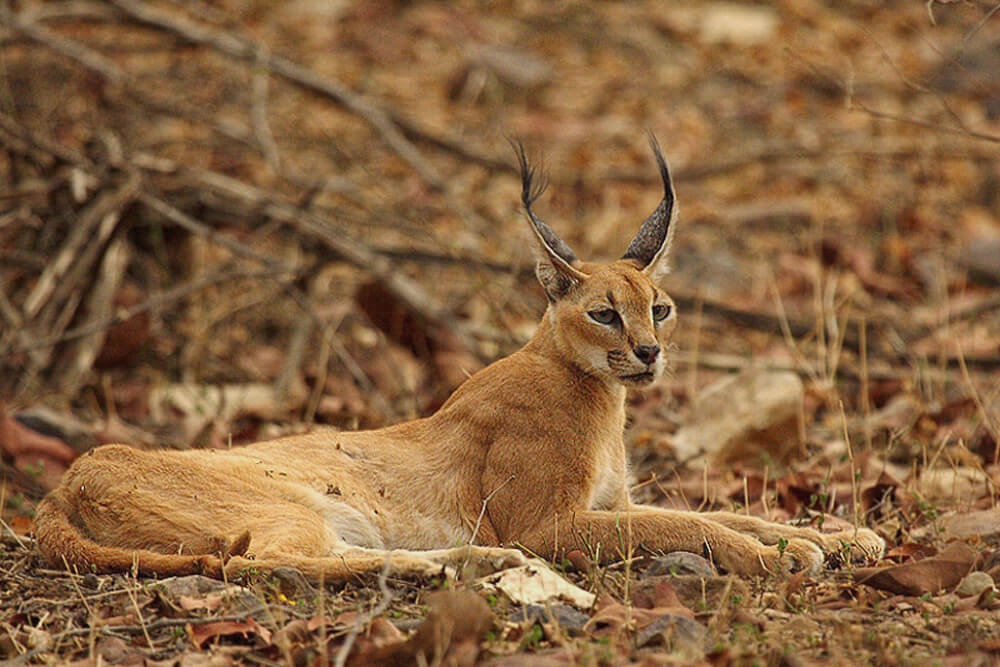 The caracal (Caracal caracal) is a medium-sized wild cat native to Africa, the Middle East, Central Asia, and India. Globally 9 subspecies are recognised and Caracal caracal schmitzi roams the arid and semi-arid lands of Arabia and India.

Caracal is called as ‘Harnotro’ (Killer of female Blackbuck or Chinkara) in Kachchhi, ‘Mor Maar Bagheri’ (Peacock killing wild cat) in Rajasthani and ‘Siyah-Gosh’ (Black Ears) in Persian and Hindi.

The oldest report of the Caracal in the Indian subcontinent is a fossil from the Indus Valley Civilization dating to 3000–2000 BCE (Ghosh 1982).In India, the Caracal was used as a coursing animal during the period of the Delhi Sultanate in the late medieval period (Divyabhanusinh 1993; Verma 1994; Thapar et al. 2013).

In the 14th Century, Firuz Shah Tughlaq was thought to have established a provision called ‘Siyah-Goshdar Khana’ solely dedicated to the maintenance of large numbers of coursing Caracal (Verma 1994). The Third Mughal Emperor Akbar furthered the reputation of the Caracal as a coursing animal and used it extensively for coursing (Blochmann 1873).

In a 2020 study on the ‘Historic and current extent of occurrence for the Caracal in India’ it is mentioned that since 2001, the Caracal’s presence has been only reported the three states, including Rajasthan, Gujarat and Madhya Pradesh, and four biotic provinces with only two possible viable populations in the Ranthambore Tiger Reserve in Rajasthan and Kutch in Gujarat.

In Rajasthan, other than Ranthambore and contiguous areas including Dholpur, the elusive cat can be recorded in the region of Kumbhalgarh-Todgarh-Raoli in Udaipur and an isolated population in Chittorgarh-Pratapgarh.

Like all small cat species, the Caracal is also threatened by the illegal wildlife trade, despite being categorised under Appendix I of CITES (Convention on International Trade in Endangered Species of Wild Fauna and Flora), which prohibits the international trade in the species.

The International Union for Conservation of Nature (IUCN) lists caracals as species of ‘least concern’, mainly due to their large numbers in Africa. But in India they are considered ‘endangered’. In India the species is listed in Schedule I of the Wildlife (Protection) Act 1972; at par with the Tiger and the Asiatic Lion.