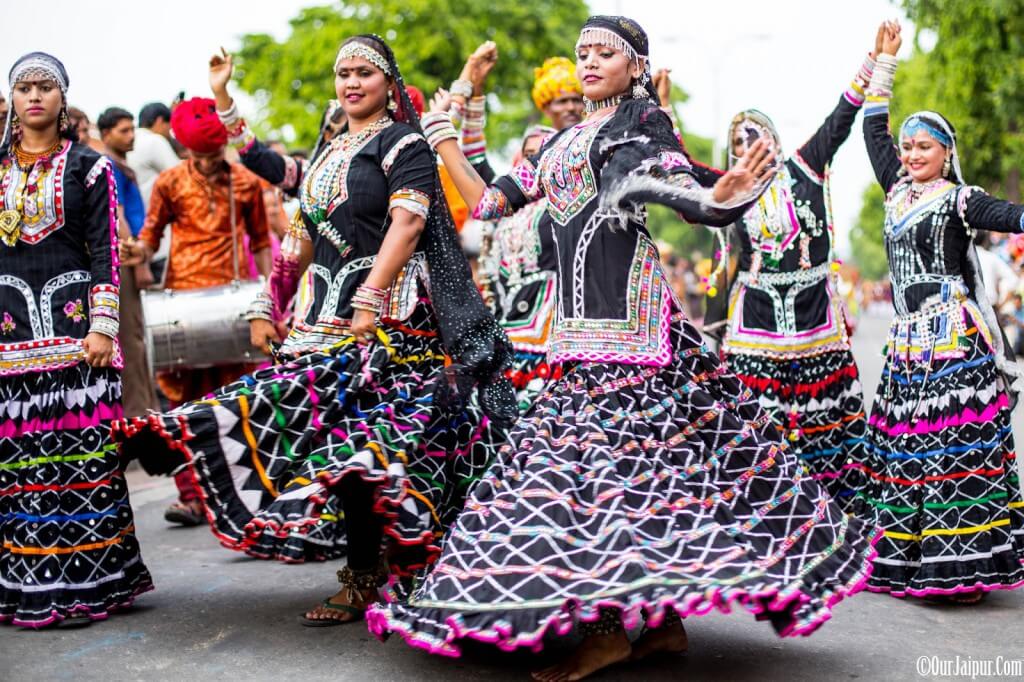 Each of these tribes can be identified by their own culture, customs, trades, fairs & festivals. Bhils & Minas constitute the majority of population of the tribes of Rajasthan.

A. Major Tribes of Rajasthan

Bhils are the largest tribe in Rajasthan. Banswara is the main area where Bhils in large numbers. The Bhils are considered to be fine archers. Infact, Bhil bowmen even found a reference in the great epics Mahabarata and Ramayan.

The Bhils were originally food gatherers. However, with the passage of time, they have taken up small-scale agriculture, city residence and employment. The major fairs of Bhils are the Baneshwar fair (held near Dungarpur) and Holi. The Ghoomar dance is one well-known aspect of the Bhil culture.

The name Mina is derived from Meen,meaning ‘fish’ in Sanskrit,  and the Minas claim descent from the Matsya Avatar, or fish incarnation, of Vishnu. The main reference of belief is based on the scripture of the Matsya Purana.

Before the rise of Rajputs during medieval period, Rajasthan had multiple mina kingdoms. The Minas are spread across the geography of Rajasthan, however, traditionally are concentrated in the shekhawati region surrounding Jaipur.

Main Kingdoms of Meenas (in the Rajasthan)

B. Denotified Tribes of Rajasthan:

British in 1871 passed Criminal Tribes Act and labeled over 200 of such communities as notified tribes for criminal tendencies. Post Independence, Government repealed the Criminal Act but introduced another law, the Habitual Offenders Act (1953) around 150 tribes have been labeled as de-notified tribes. These are tribes that have failed to integrate into Indian Society and so do not have sustainable livelihood means. Hence, they frequently engage towards criminal activities.

The framers of the Constitution took note of the fact that certain communities in the country were suffering from extreme social, educational and economic backwardness arising out of age-old practice of untouchability and certain others on account of this primitive agricultural practices, lack of infrastructure facilities and geographical isolation, and who need special consideration for safeguarding their interests and for their accelerated socio-economic development.

These communities were notified as Scheduled Castes and Scheduled Tribes as per provisions contained in Clause 1 of Articles 341 and 342 of the Constitution respectively.

Scheduled Tribes are those, which are notified as such by the President of India under Article 342 of the Constitution. The first notification was issued in 1950. The President considers characteristics like the tribes’ primitive traits, distinctive culture, shyness with the public at large, geographical isolation and social and economic backwardness before notifying them as a Scheduled Tribe.

75 of the 705 Scheduled Tribes are identified as Particularly Vulnerable Tribal Groups (PVTG) considering they are more backward than Scheduled Tribes. They continue to live in a pre-agricultural stage of economy and have very low literacy rates. Their populations are stagnant or even declining.

In 1973, the Dhebar Commission created Primitive Tribal Groups (PTG) as a separate category, who are less developed among the tribal groups. In 2006, the Government of India renamed the PTGs as PVTGs.

Consequently, in 1975, the Government of India initiated to identify the most vulnerable tribal groups as a separate category called PVTGs and declared 52 such groups as PVTG, and later in 1993 an additional 23 groups were added to the category, making it a total of 75 PVTGs out of 705 Scheduled Tribes.

To ensure the protection of aboriginal customs, culture of the tribes and prevent alienation of their lands and natural resources to non-tribals article 244 of the Constitution has the provision for declaration of Schedule V & Schedule VI areas.

Schedule VI has been used to declare schedule areas in  Assam, Meghalaya, Tripura and Mizoram.

Acts & Rules for protection of tribes:

Schemes related to development of tribes of Rajasthan: