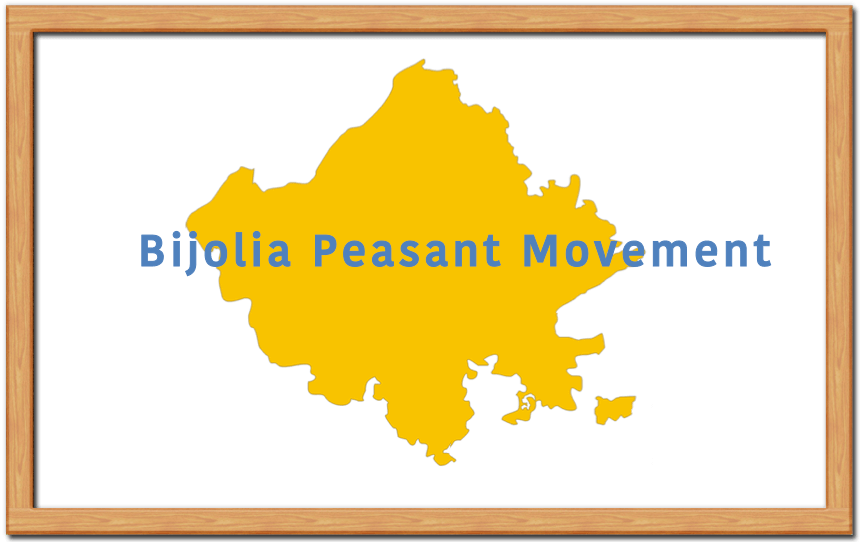 Bijolia was ‘‘A” class Jagir of the Udaipur State with a population of about 1200 in 1891. The majority of peasants in Bijolia belonged to Dakan Gotra of the Jats. The Bijolia peasant movement may be divided into three main phases.

In 1897 thousands of Dhakar peasants from various villages of Bijolia gathered at a village Girdbarpurn in a death feast (Nukta) of Gangaram Dhakar’s father. The exploited and oppressed peasants discussed their miseries with each other reached  the consensus that the root cause of their sufferings was the heavy burden of land revenue cesses and forced labour. The peasants also agreed to take some steps to get relief and decided to send a deputation to the Maharana at Udaipur to represent their grieva- nces. The above gathering also decided the names of Nanji Patel of Berisal and Thakari Patel of Gopal Niwas for deputation. The two representatives reached Udaipur and after continuous efforts of eight months they succeeded in presenting their grievances before the Maharana. The Maharana deputed a revenue officer to hold enquiry in the revenue matters of Bijolia.

The enquiry conducted by the revenue officer found the complaints of the peasants valid and true. However, not much attention was paid to enquiry report by officer and Jagirdar was issued a mere warning. Nanji Patel & Thakari patel were expelled from the Jagir and movement suffered a setback.

The year 1899-1900 was the year of famine and distress which worsened the condition of the peasants. An incident of 1903 compelled the peasants to defy the authority of the Jagirdar openly. In 1903 the Jagirdar imposed a new cess known as Chanwari lag. According to this cess every subject of Bijolia had to pay rupees thirteen to the Jagirdar on the occasion of his daughter’s marriage. The peasants protested against this arbitrary imposition of such tax and when Jagirdar refused to take it back, the peasant started migrating to neighbouring states of Bundi and Gwalior. This changed the attitude of Jagirdar and he rolled back the Chanwari tax immediately and provided certain other reliefs.

Rao Krishan Singh died in 1906 without any heir and his near relation Prithvi Singh became the Jagirdar. He not only withdrew the concessions given by Kishen Singh but also imposed some new taxes on the pretext of Talwar-bandhai lag (Succession cess) which he paid to the Maharana.  The peasants of Bijolia were again forced to live in the state of destitution under the clutches of feudal exploitation. In 1913 the peasants were again compelled to start a movement against the Jagirdar.

In March 1913 nearly 1000 peasants under the leadership of Sadhu Sitaram Das assembled before the palace of Bijolia Jagirdar to present their grievances. The Jagirdar refused to see the peasants.  The peasants decided not to cultivate the lands in Bijolia and the lands were left fallow in the year 1913-14. This decision resulted in heavy loss of revenue to the Jagirdar while the peasants cultivated the lands in the adjoining states of Gwalior, Bundi and the Khalsa land of Udaipur State.

In December, 1913 the Jagirdar, Prithvi Singh, died and his minor son Keshri Singh ascended the throne of Bijolia feudatory.  As Keshari Singh was a minor, the Jagir was put under the direct control of Udaipur State. This change was in favour of the agitating peasants and in January, 1914 two officers were to look into the matter and settle the same. Though concessions and relief in taxes were declared but they never came to effect.

The eventual failure of implementation of 1914 concession worsened the dissatisfaction among the peasants and ground was second phase of movement.

During 1915, the second phase of Bijolia Peasant Movement started when Sadhu Sitaram invited Vijay Singh Pathik to assume the leadership of the movement. He established Vidya Pracharni Sabha at Bijolia and under this Sabha he started a library, a school, and a Akhara.  In 1916 Vijay Pathik organised a peasant organisation known as Bijolia Kisan Panchayat. He established a central committee of the Kisan Panchayat which was named as Kisan Panchayat Board and its branches were opened in each village. The central committee also established a panchayat fund with subscriptions from its members. Manna lal Patel was appointed Sarpanch and a committee of 13 members was constituted under him to conduct the movement. Manik Lai Verma who was a Jagir employee was highly impressed by the activities of Pathik and he resigned from the service to work among the peasants.

During  1917 many petitions with thousands of signatures of peasants were sent to the thikana and Udaipur State, to abolish the cesses, forced labour, war tax. unjustified land revenue and to end the peasants’ torture and oppression by the Jagirdar and his officials. However, the authorities continued to ignore the petitions and did nothing  in favour of the peasants.

Consequently, the Panchayat Board decided to launch a no-rent campaign. In August 1918 the no rent compaign was started with non co-operation movement. The peasants decided not to obey the orders of thikana, and boycott the thikana police and courts. They also decided to not go to the town for shopping, not to drink and to stop the marriage and death feasts.

The Maharana of Udaipur was adamant not to consider the demands and instructed the thikana authorities to crush the movement.  All the main activists of the movement including Manik Lai Verma and Sadhu Sita Ram Das were arrested. In all 51  persons were arrested. Vijay Singh Pathik went underground and he guided the movement in the absence of other leaders. Under his guidance, thousands of peasants joined Satyagraha & sat on dharna.  The above activities compelled the Udaipur Government to appoint an enquiry commission (1919). However, like the previous commissions it also acknowledged the grievances of peasants as genuine but failed to take any action.

The movement was intensified and peasants decided not to cultivate the lands of Bijolia. The Rajasthan Sewa Sangh and the Rajputana Madhya Bharat Sabha also extended their support to the movement. This brought the movement to the national scene.  The leaders of the peasants tried to get the support of the Indian National Congress, but could not succeed because the congress was not in favour of agitation in the princely states. The leaders of Bijolia built up pressure which compelled the Udaipur Maharana to appoint a second enquiry commission in February 1920. Thakur Raj Singh of Bedla was appointed the Chairman of the Commission and Rama Kant Malviya and Takhat Singh Mehta were the members. The enquiry commission after through investigations, recommended that the grievances of the peasants should be redressed. On the advice of Mahatma Gandhi, Madan Mohan Malviya tried to persuade the Maharana. However, all the efforts of Madan Mohan Malviya failed as the State was not in favour of any agreement with the peasants.

During 1921, the movement was also influenced by the Russian Revolution of 1917 and the movement entered into a more militant phase.

The peasant movement of Bijolia became the main source of inspiration to other movements. In such circumstances the British Government was afraid that if the Bijolia agitation was not controlled in time it would spread throughout the Rajputana.Hence, In 1922, the Government of India appointed a high power committee that also included the Agent to Governor-General in Rajputana, Robert Holland. The committee held talks the sarpanch of the Bijolia Kisan Panchayat Board represented by Moti Chand, Mantri Narain Patel, Secretary of Rajasthan Seva Sangh, Ram Narain Choudhary, and Manik Lai Verma representing the peasants.After a long discussion an agreement was reached.

The agreement introduced much needed judicial, police and Jail reforms. The authorities recognised the Kisan Panchayat as an important representative body of the peasants. The panchayat was entrusted with many powers and functions. The psovisions foi abolition of begar, exemption and reduction of cesses, peasants’ rights on natural products and use of forest for grazing and fire wood were of great importance as these provisions paved the way for economic progress.

By the end of 1923 the peasant uprisings in other parts were put to an end with repressive measures, which encouraged the British, State and thikana authorities to deal with the peasants cruelly. The arrest of Vijay Singh Pathik gave a severe set-back to the peasant movement of Bijolia. The thikana paid no attention to implement the agreement of 1922 and the state of affair further worsened the conditions of the peasants and they became heavily indebted to the money- lenders.

Vijay Singh Pathik was released on 28th April, 1927 under an order in which his re-entry in Mewar was forbidden.  By this time Manik Lal Verma detached himself from the Bijolia movement as differences arose between him and Pathik. During, June 1927 the peasants started sending their conditional resignations from their unirrigated holdings, the thikana took strong exception of this decision and gave land holdings to new occupants. The peasants now tried to get their land evicted from the new occupants by force but they could not succeed as troops were stationed in every village to protect the new occupants. In 1930 the leadership passed into the hands of Jamnalal Bajaj and Haribhau Upadhyay who were unknown among the peasants. All this lead to decline to peasant movement after 1930.

The peasant got their surrendered lands in 1939 when they became aloof from all the political activities and assured the thikana that they would never go on agitation in future. The Prime Minister of Mewar, Sir G. Raghavacharya held a dialogue with Prajamandal and handed over the acquired land.

The Bijolia Peasant movement could not attain its ultimate goal but it did succeed in infusing anti-feudal consciousness among the peasants of Rajasthan. It also proved a severe attack on feudalism. It also inspired and encouraged such type of movements in the other parts of Rajasthan. This prepared the ground for mass struggle and social development.