Rajasthan had never been united politically until its domination by Mughal Emperor – Akbar. Akbar created a unified province of Rajasthan. Mughal power started to decline after 1707. The political disintegration of Rajasthan was caused by the dismemberment of the Mughal Empire. The Marathas penetrated Rajasthan upon the decline of the Mughal Empire. In 1755
they occupied Ajmer. The beginning of the 19th Century was marked by the onslaught of the Pindaris. 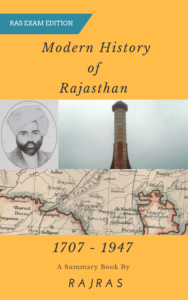