What is Public Private Partnership (PPP) ?

Public Private Partnership (PPP) model involves a contract between a public sector authority and a private party, in which the private party provides a public service or project and assumes substantial financial, technical and operational risk in the project.

Rajasthan’s PPP model does not restrict private players to merely building roads and bridges, but allows them to take control of the services and social sectors. It pushes for privatization in even those government sectors hitherto forbidden to the private sector.

Rajasthan Government has broken the monopoly of the government sector in transportation, power distribution, public distribution schemes (PDS), health and education. Hence, in Rajasthan, PPP  is being used both for building infrastructure as well as for improving the provision of services.

To provide and support an increasing role for PPP – both in creating new infrastructure assets as well as in managing assets already created, the State has witnessed considerable growth over the years, with particularly successful implementation in the road, energy, urban infrastructure and health sectors arising out of a number of policy and institutional initiatives taken by the State Government.

To provide an effective arrangement for successful development and execution of PPP projects in the State, the State Government has adopted, a three-tier institutional framework comprising the following:

The PPP Cell created under the Planning Department in the year 2007-08, is the State Nodal agency to coordinate efforts of the State Government regarding projects entailing Public- Private Participation. It serves as the repository of all the information relating to PPP in the State including best practices, guidelines, schemes etc.

This Cell serves as the secretariat of the ECID and being strengthened to support departments in project development, appraisal and evaluation. This Cell provides all hand-holding support for development of these projects.

A fund of ₹4.50 crore was created for an initial term of 5 years in 2003, subsequently extended by further one year for assisting development of infrastructure projects in the State with private sector participation.

A new fund titled “Rajasthan Infrastructure Project Development Fund” (RIPDF) was created in 2011 with an initial corpus of Rs. 25 crore for supporting the development of credible and bankable PPP projects. RIPDF stands dissolved with effect from 18th June, 2015.

The PPP Cell of Planning Department also reviews the status of State’s PPP projects on quarterly basis under three categories viz., completed projects, projects under implementation and projects under planning or in pipeline.

The National PPP Capacity Building Programme (NPCBP) launched by Department of Economic Affairs, Ministry of Finance, Government of India in the year 2010 with support of KfW (German Development Bank ) was rolled out successfully in the State of Rajasthan.

The aim was to enhance capacities of senior and middle level officers of Administrative Departments/ Implementing Agencies concerned at large to enable them in conceptualizing, structuring, awarding, implementing and monitoring of the PPP projects.

To mark the culmination of the NPCBP, the PPP Cell of Planning Department, Government of Rajasthan was awarded by Department of Economic Affairs, Ministry of Finance, Government of India in March, 2014 for commendable contribution in the implementation of the programme.

The PPP Cell of Planning Department has now been providing resource support on PPPs to all the national and state training institutes, available in the state.

In June 2015, Rajasthan Government decided to run PHC public-private partnership (PPP) mode. There were 2,082 PHCs operating in Rajasthan. In first phase, 90 out of these 2082 were handed over to be run in PPP mode.  Selection of private partners  was done through the open bidding system and private operators were asked provide doctors, paramedics and other staff, free OPD, and 24-hour emergency scheme among other things.

Why PPP for PHC:

Going forward on PPP model, Rajasthan government handed over control of 30 PHCs and 153 sub-centers (SCs) – chosen from among the worst-performing centres- across 12 districts in the state to Wadhwani Initiative for Sustainable Healthcare (WISH) foundation. 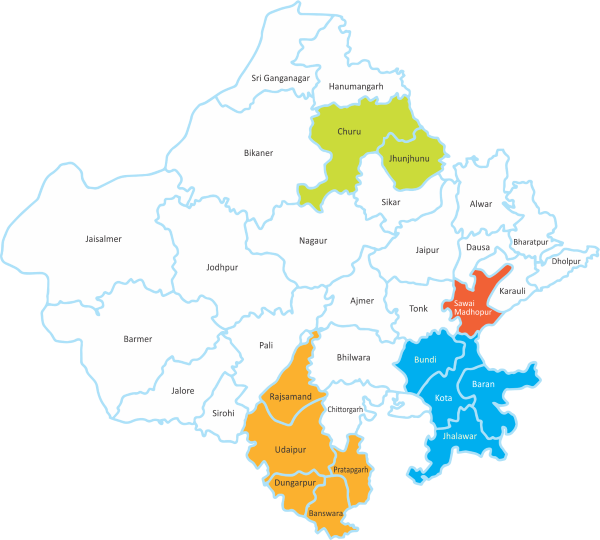 According to the policy, about 20 per cent of the rooms in the Dak Bungalows will be reserved for government officials and other employees and remaining 80 per cent will be open for all.

4. Other PPP initiatives in Rajasthan