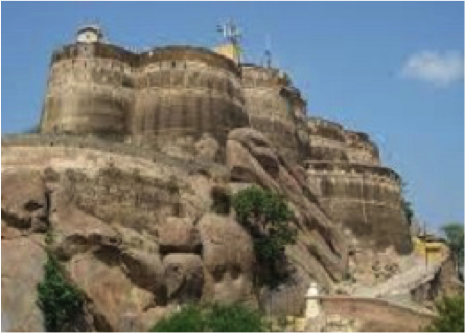 Sikar forms part of ancient civilization with both Ganeshwar and Bageshwar (Neem ka Thana), part of pre-Harappan period, being located in Sikar. The primitive name of Sikar was “Veer Bhan Ka Bas” .

During medieval times, Sikar, Churu and Jhunjhunu district comprise of the Shekhawati region of Rajasthan. It was the biggest Thikana (Estate) of the Jaipur State earlier it was known as Nehrawati.

Sikar is a very fascinating and charming place for the tourist. The fresco Painting on the ancient havelies, temples and forts captivate the tourist from abroad. Sikar was the kingdom of royal Shekhawat rajas. Interestingly, three most prominent business homes of the country viz. Bajajs, Birlas and Goenkas also belong to the district.

Ganeshwar is a village in Neem Ka Thana Tehsil in the Sikar District. Ganeshwar is an ancient site where excavations have revealed the remains of a 4000 years old civilizations.

Historian Ratan Lal Mishra wrote that, when Ganeshwar was excavated in 1977, Red pottery with black portraiture was found which is estimated to be belonging to 2500–2000 BC. Nearly one thousand pieces of copper were found there. Ganeshwar is located near the copper mines of the Sikar-Jhunjhunu area of the Khetri copper belt in Rajasthan. Excavations revealed copper objects including arrowheads, spearheads, fish hooks, bangles and chisels. With its microliths and other stone tools, Ganeshwar culture can be ascribed to the pre-Harappan period. Ganeshwar mainly supplied copper objects to Harappa.

The 10th century, Harshnath temple, belonging is located on the Aravalli Hills near Sikar. It is an ancient site containing remnants of old Shiva Temple of 10th Century . Another Shiva temple, constructed in the 18th century by Shiv Singh of Sikar, is situated near the Harshnath temple.

The holy shrine of Hazrat Khwajah Haji Muhammad Najmuddin Sulaimani Chishti, famous as Huzoor Najam Sirkar, is is located at Fatehpur Shekhawati District Sikar 165 km away from Jaipur and 55 km from Sikar on N.H. 12.

He belongs to the great silsilah-e-Chishtiah  and in the 13th century Hijri he played a prominent role in spreading the Silsilah in the all parts of the country.

Laxmangarh town is a popular tourist place that is known for the Laxmangarh Fort. The fort was built on the hill in 1862 by Laxman Singh, Rao Raja of Sikar. It is believed that the foundation of the Laxmangarh town was based on the planning system of the capital city Jaipur.

Fatehpur is a town in the Sikar which is part of the Shekhawati region. Located on midway between Jaipur and Bikaner ( NH-11), Fatehpur is famous for grand havelis with frescos and a number of bawdis.
Main attraction of Fatehpur are :-

Gangaur is the one of the most colorful and important festivals of Rajasthan and is observed throughout the state with great fervor and devotion by women who worship Gauri, the consort of Lord Shiva during March–April. The festival commences on the first day of chaitra, the day following Holi and continues for 16 days. For a newly-wedded girl, it is binding to observe the full course of 18 days of the festival that succeeds her marriage. Even unmarried girls fast for the full period of the 18 days and eat only one meal a day.

Teej is the festival of swings. and marks the advent of the monsoon month of Shravan (August). This festival is dedicated to the Goddess Parvati, commemorating her union with Lord Shiva. Goddess Parvati is worshipped by seekers of conjugal bliss and happiness.  The traditional Ghevar sweet is also associated with the festival. The day before Haryali Teej, is celebrated as Sinjara, wherein women put mehandi on their hands and eat Ghevar.

Khatu Shyam is famous Shyamji temple built with white marbles with water ponds for holy dip and Shyam garden. Khatushyamji is located 65 Km. away from Sikar & 80 Km. from Jaipur via Reengus. The Khatu Shyamji Fair is held in the months of February and March and various forms of dance, art and music are displayed. An annual fair is also held between the Phalgun Sudi Dashmi and Dwadeshi, lasting for three days.

Jeenmata is located in Jeenmata Village at a distance of 29 km from Sikar town in south direction.There is an ancient Temple dedicated to Jeen Mata. A colourful festival held twice in a year in the month of Chaitra and Ashvin during the Navratri which is attended by a large number of devotees.

The general shape of the district is of an irregular crescent or a bowl. The district can be broadly divided in to three natural divisions namely:

The major part of the district is a sandy tract but it is more so towards the north of Sikar which forms a part of the great Indian desert. It is identified by waste land and Sand-dunes.

The hills in the eastern part of district forms part of the Aravalli ranges, which run from North-East to South-West direction. These ranges divide the district in two equal parts and also prevent sand-dunes from western part to travel to eastern part. Area south of Khandela in Sri Madhopur tehsil in central portion of district is an undulating plain.

There are no perennial rivers in the district. But there are five streams namely, Kantli, Mandha, Doha, Sabi and Krishnawati.

Sikar district is endowed with some important mineral deposits of the state. It has vast resources of pyrite near Saladipura and lime stone in Neem- ka ­Thana areas. Other minerals avaialbe in the district are copper, iron,apatite, calcite, beryllium, fluorspar, feldspar and barytes.

The details of mineral deposits are given below.

Copper mineralization occurs as parallel zones from Mothoka in the north to Ahirwala in the south (over a length of 35 kms.) with in the rocks of Delhi Super group. The investigation carried out in this belt has revealed a number of isolated and detached prospects. In Baleswar, a reserve of 1.5 million tonnes containing 1.1 % has been established. Copper – molybedenum mineralisation has been reported from Tejwala-­Ahirwala, Chiplata prospects. In Tejwala block 0.5 million tonnes reserves with 0.5% Cu have been estimated.

Pyrite deposit are located about 1.5 km. north west of Saladipura village which is 120 km. from Jaipur via Sri Madhopur.

The occurrences of beryl are reported from Torda, Buchara, Churla and Sanwalpura areas in Bairath tehsil. The areas are about 35 kms. east of Neem-Ka­Thana railway station. Here the granite pegmatites are exposed in wide area in which beryl occurs as one of the constituents.

The mica mines of this district are located in the schistose formation of Delhi Supergroup. A few mines of the district are at Kachrada, Makri and Maonda situated in Neem-ka- Thana tehsil. The Kachorada mines have produced green variety of mica while the others are of heavily stained ruby quality. The mines are now closed.

Impure talc occur near Dariba about 20 kms. from Neem-ka- Thana railway station. No detailed work on the same has yet been done.

Fluorspar mineralisation is found to occur around Salwari (Chokri) village in 10 kms. area. It is located at a distance of about 6 kms. from the main bus route from Khandela to Udaipurwati. The mineral occurs in a very fine grained pink granite which is intrusive into biotite-schist ofAjabgarh Group and is aplitic in nature.

Phosphate occurs in form of apatite. The apatite deposit is located near Kerpura Salwari village in rocks of Delhi Super group and Post Delhi intrusives.

The minerals occurs near Maonda Village. Two important quarries viz. the Bhilkajiwali and Bada khet in this locality have given good production. Department of Mines and Geology has carried out detailed prospecting work in Raipur(near Dabla) area and 39,300 tonnes calcite reserves have been proved.

Barytes deposits are located about 2 km. NE and SSW of the villages Kharakbingpur and Naroda respectively.

Important places are Dabla, Jeetala, Kharbipura, Ajitgarh, Sirohi, Saladipura and Chapoli. The granite occur as high hillocks and in the form of isolated boundary outcrops. The colour is mostly light earthy to pinkish with red garnet spots. It is mostly medium to coarse grained forming an overall granular texture. Some famous varieties are Ajitgarh Grey & Ajitgarh White.