The early history of Sawai Madhopur originates in Ranthambore fort. The oldest settlements are located near the fort only. According to one popular belief Ranthambore Fort was built by Chauhan Rajput King Sapaldaksha in the year 944 AD, whereas, according to another school of thought the fort was constructed by Chauchan King Jayant in 1110 A.D.

During the course of medieval period, the fort of Ranthambore kept changing hands till 1765, when Mughals handed over the fort to the Jaipur ruler, Sawai Madho Singh.

Brief History of Fort of Rathambore:

During the mid 18th centuries the Maratha rulers  were gradually gaining power in Western India. In order to check their power, Ruler of Jaipur, Sawai Madho Singh, requested the Mughal king to hand the fort to him but request was not honored. Nevertheless, the Madho Singh fortified the village of Sherpur and named it after himself, Sawai Madhopur. Two years later the Mughals handed over the fort to the Jaipur ruler.

During the British Rule Sawai Man Singh built a railway line between Jaipur and Sawai Madhopur. As a result it became accessible from a central spot in the state of Rajasthan. 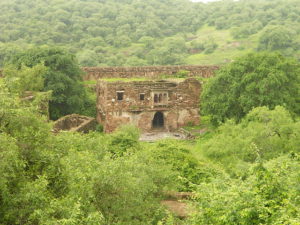 Ranthambore Fort was built by the Chauhan rulers in the 10th century. It has been declared a UNESCO World Heritage Site under the group Hill Forts of Rajasthan. The fort is characterized by temples, tanks, massive gates and huge walls. The fort is well protected by a massive fortification wall provided with stepped and Z-shaped gateway with two strong and massive doors. An architectural marvel, the fort includes  includes the Hammir Badi Kachahari, Chhoti Kachahari, Battis Khambha Chhatri, Hamir Palace, Rani Palace, Toran Dwar, Mahadeo Chhatri and Sametonki Haveli within its premises. Among temples, the Ganesa temple is important besides a few Jain temples.

The imposing Khandar Fort is a place worth visiting and is situated just 45 kms from Sawai Madhopur. Located on top of a strategic vertical hill,could never come under an easy attack and thus was truly regarded as invincible. This magnificent fortification was long ruled by the Sisodia Kings of Mewar after which it was taken over by the Mughals.

Enshrined in the Puranas, the Ghushmeshwar Temple is believed to be 12th or the last of the Jyotirlingas of Lord Shiva. Situated at the Siwar village in Sawai Madhopur, this temple has many mythological stories weaved around it.

The early medieval Jaina temple, known as Chamatkarji, is situated outside the city and dedicated to lord Adinatha. The temple compound is enclosed by a modern high parapet wall with small cells all round and is entered from the west. The main shrine is situated in the centre of the courtyard and is enclosed by high wall with entrance in the north. The garbhagriha facing east, is pancharatha on plan with circumambulatory passage around. The sikhara is curvilinear.

A four line Persian inscription on a rectangular stone slab, fixed in the Ghori Baori in Alanpur village, belongs to Alauddin Fidan Shah, son of  Mahmud Shah Khalji I, Sultan of Malwa.  It is dated A.H. 874 (A.D. 1469-70) and records construction of the step-well by Khwaja Jahan son of Bir Ali Turk Khurasani. The slab now broken into four pieces has been taken to the Ranthambhore Fort collection of antiquities.

The Trinetra Ganesha Temple in Ranthambore, is one the most renowned and oldest temples in Rajasthan. Ganesh Chaturthi Fair is the most recognised fair of Sawai Madhopur. It is organised on Bhadav Shukla   Chaturthi at Ganesh Temple , in the surrounding of Ranthambhore Fort.

Chauth Mata Fair is organized at Chauth ka Barwara.  There is a huge mela organised every year, as per the hindi month magha ( Jan – Feb), on the 4th day of the month.  This mela lasts for 15 days.

Lakhs of people from different parts of the country come to take part in the Kaila Devi fair of the Karauli district. This fair takes place in the month of April-May Navratras. This beautiful fair in the month of Chaitra witnesses various rituals and activities like KanakDandoti, Mina performers and ladies joining the celebrations.

The Shri Mahvirji Fair is held at the Chandangaon village in the memory of BhagawanMahaveer. This fair takes place from Chaitra Shukla Navami to Baisakh Krishna Ekam annually.

An annual fair is held at the Shiv Ratri Ghushmeshwar Mahadeo in village Siwad, 40kms from SawaiMadhopur and 3kms from Isarda Railway Station. It is celebrated with great fervour and gaiety. The entire town dresses up and participates as one. Rituals older than 600 years are still practiced and followed during the fair.

The district is rectangular in its general shape and falls in the category of the eastern district of the state. It has partly plain and partly undulating hilly terrain.  The plain part is fertile and soil in most parts is in light & sandy. South and south east portion of the district comprise hills and broken ground which form a part of a vast track of rugged region enclosing the narrow valley of the Chambal river.

The Banas, Moral and Chambal are the main rivers in the district. The Banas is the largest among them. It is also important to note that no part of the district falls in the category of a desert and also there are no natural springs in the district.

The forest covers an area of about 27.77 % of the total area of the district Dhokara, Khair, Bambu, Neem, Peepal, Sisam etc. are the majors trees of these forest. Major forest products are cooking wood, Charcoal, Tendu leaves, Guegal, Gum, Kattha, Honey etc. A part from these above products one special type of grass known as Khas is also available in abundance in these forest and is used to manufacture Itra & Perfumes etc.

Situated 14 km from Sawai Madhopur, the Ranthambore Park gets its name from the Ranthambore Fort situated within its boundaries. The National Park, situated amidst the Aravalis and Vindhya ranges is spreads over an area of 392 sq.km of thick forest punctuated with pleasant waterfalls. It is home to the elusive tiger, other animals found here include chinkara, sambhar, cheetal and over 300 species of birds. 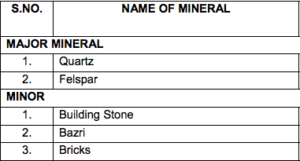 The district is enrolled with a variety of mineral resources both metallic and nonmetallic. The metallic minerals include lead, copper and iron ore where as the nonmetallic minerals includes limestone, clays, silica sand and slate. Among other mineral found in the district are laterite, red-oxide, bentonite, barite, manganese sand and bricks clay etc.