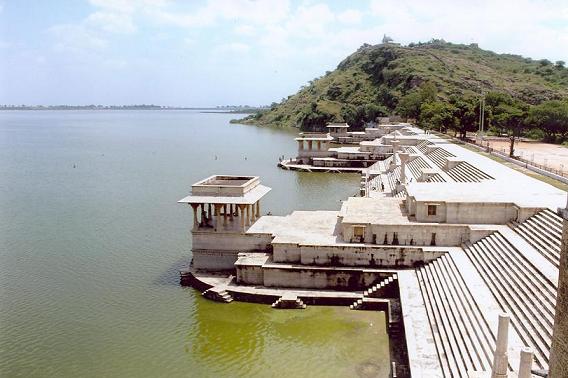 Rajsamand district is situated at the southern tip of Rajasthan surrounded between 24′.46″ & 26′.01″ North Latitudes and 73′.28” and 74′.18″ East Longitude. It is oval in shape with a very narrow strip stretching to words the north  and is surrounded by Bhilwara, Pali, Ajmer and Chittor district.

Rajsamand has an area of 4527 Square Km which is divided into 9 Tehsils namely Amet, Bhim, Deogarh, Kumbhalgarh, Gadbor, Nathdwara, Railmagra, Rajsamand and khamnor. 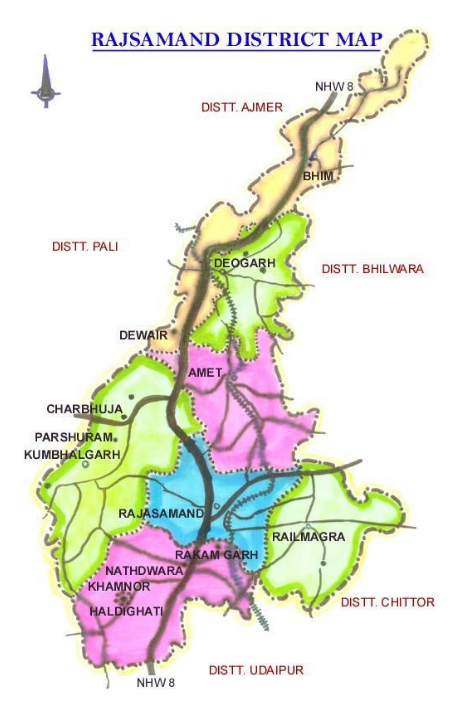 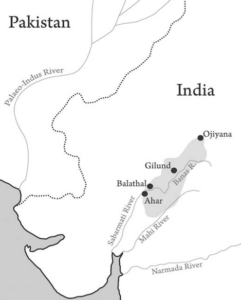 Gilund is an archaeological site, which is one of five ancient sites excavated in the Ahar-Banas Complex, other being Ahar, Ojiyana, Marmi and Balathal. There are three major rivers in the area which include the Kothari, Banas, and Berach. At the ancient site of Gilund, two mounds labelled as ‘eastern’ and ‘western’ mounds.

The Kumbhalgarh Fort was built by Rana Kumbha between A.D. 1443 and 1458 on the site of a still older castle which tradtion ascribes to Samprati, a Jaina prince of the second century B.C.  It is the second most important fort of Mewar after Chittaurgarh.  It is defended by a series of walls with battlements and bastions built on the slope of the hill which is reached through seven great gateways viz. Aret Pol, Halla Pol, Hanuman Pol, Ram Pol, Nimboo Pol, Bhairon Pol.  Among important temples are those of Mahadeva, Pitaliya Dev, Neelkantha, etc.  Bawan Devri and Golerao temples (nine in numbers) are Jaina temples.  The most important building, though of later period, is the Badal Mahal or Cloud Palace.

A place of immense historic interest where a fierce battle between Maharana Pratap and the Mughal emperor Akbar, was fought in A.D. 1576.  The battle field comprises a narrow pass which runs south to north-east and ends in a plains where the main battle took place. The name of the valley, Haldighati derives from its yellow soil having the colour of turmeric or Haldi.

Chetak Samadhi is a memorial where Chetak, a faithful horse of Maharana Pratap (AD 1540-1597) took his last breath on  18th June during the battle of Haldighati in AD 1576.  In this battle, Maharana Pratap and his horse were severely wounded.  The critically injured Chetak saved his master by carrying him from Rakta Talai to the other end of Haldighati by crossing the nearby stream.  To remember his loyalty and sacrifice of Chetak, a memorial was raised over the site.

The northern portion of Rajsamand lake’s embankment is called Nav Chowki. Flights of nine steps at each level descend to the water’s edge. There are three chhatris or pavilions, intricately carved, depicting figures of gods and goddesses, animal figures and floral and geometrical designs. The gateways ortoranas, originally five of which only three exist, are also richly carved and ornamented. All the pavilions and toranas are made of white marble. The famous Rajprasasti Sanskrit inscriptions, twenty-four in number containing verses laudatory of Maharana Raj Singh and providing an elaborate history of Mewar in general and Maharana Raj Singh in particular, can be seen all along the ghats, fixed in the niches.

Badshahi Bagh is the area where Mughal army first set up their camp after realizing the difficulty in fighting along the neck  of Haldighati.

This is the last spot where the second half of the battle of Haldighati was fought between Maharana Pratap (A.D.1540-1597) and the Mughals. As a result, thousands of soldiers o on both sides were died and their blood flowed to such an extent that it formed a pool. The twin cenotaphs that stand to commemorate the exploits of Raja Ram Saha of Gwalior and his three sons who paid the debt of gratitude to their  patron with their lives.

Maharana Pratap made the adventurous military campaigns of the Mughal ruler ineffective by resorting to gorilla warfare. On the auspicious occasion of Vijaya Dashmi, in 1852, he was crowned with historic victory, which led to the automatic liquidation of all 36 Mughal military outposts in Mewar. After this humiliating defeat Akbar stopped his military campaigns against Mewar.

The victory of Dewair was a crowning glory for Maharana Pratap and in his famous book “Anals and Antiquities of Rajputana”,  Col. James Tod described Dewair as “Marathon of Mewar”.A victory Memorial has been constructed on the same.

Nathdwara Temple is 17th century temple ,  located in the Aravalli hills on the banks of the Banas River,   which houses the idol of Shrinathji, considered an incarnation of Krishna. The idol was originally worshipped at  Jatipura, Mathura and was shifted in the 1672, during reign of Aurangzeb, from Govardhan hill, nearMathura along holy river Yamuna after being retained at Agra for almost six months.

It is a celebration of fertility. It continues to be a major festival for centuries. Ghoomar dance is specially associated with Gangaur. The three days long Gangaur fair is organised by Municipal Council of Rajsamand in the real spirit of devotion in the month of March/ April every year.

The 9 day fair is organised in the vicinity of Karnimata Temple in Devgarh.

A virtual drama of colours in a theatre of green hills, where lacs of devotees get together in the month of September to take lord to the lake near by for the religious bath in a grand procession. People around Rajasthan, Gujarat and Madhya Pradesh visit Charbhuja to celebrate the occasion.

Gawri, the famous dance drama, marked among other things, is a month long performance of the Bhil community. It is the major event of entertainment for the rural population and is being played especially in Mewar. Troops of dancers move from village to village, during a month long performance. The functionaries follow strict religious code of conduct. Between the enactment of various episodes, the entire troop dances around a central spot devoted to a deity.

The district surrounded by the Aravli ranges from north to east .It has an average elevation of 547 meters.  The Northen part of the district consist of elevated place while the eastern part has vast stretches of fertile plains. The Southern part is covered is rocks, hill and dense forest-where as the western portion known as hilly traits of Mewar is composed by Aravali range stretching from Bhim tehsil to Kumbhalghar. There is one passage in the Aravili range viz Desuri Nall and Sadri which is high points of Pali and Jodhpur.

Rajsamand district is drained by Banas river and its tributaries i.e. Khari, Chandrabhaga, Gomati, Kothari, Ahar etc. The river as well as tributaries are ephemeral and flow only in response to heavy precipitation. The predominant drainage pattern in the western hill ranges is rectangular to sub-rectangular and it is dendritic to sub-dendritic in rest of the area. Drainage pattern in the western hill region is controlled by fractures and joints and in the rest of the area by subsurface lineaments. The area has some lakes and tanks also.

The climate of the district is moderate without significant seasonal variations December & January the coldest month while May and June are the hottest month . The minimum& maximum Temperature recorded at Rajsamand center 7` C and 40` C respectively. The main temperature is 44.0`C. The average rainfall at the district headquarter is 49.5 Cm

Both Rabi and khariff crop are grown in the district. Main crop of khariff are maze, urad, cotton sugarcane, in Ravi crops barley, Wheat, gram and Mustard are the main crops

The Todgarh-Rawali Wildlife Sanctuary was established in 1983 and covers an area of 495 square kms,spread across Pali, Ajmer and Rajsamand. It is composed of tropical deciduous forests and grassland. Major wildlife includes leopard, wild boar, chinkara, common langur, sloth bears and Indian wolf.

Rajsamand lake was built in 17th century by Maharana Raj Singh of Mewar, across the Gomati, Kelwa, and Tali rivers.The river Gomti is the main supplier of water to Rajsamand Lake.