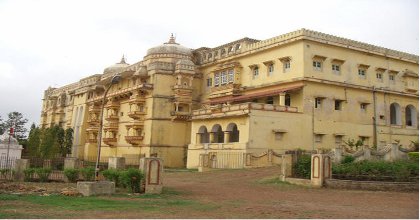 Pratapgarh is situated in the south-eastern part of Rajasthan, located at 24.03° N 74.78° E with an average elevation of 580 meters. It is surrounded by Udaipur, Banswara and Chittorgarh districts of Rajasthan and Ratlam, Mandsaur and Neemuch districts of Madhya Pradesh.

Pratapgarh has an area of 4,117 square meters, which is divided into 5 tehsils, namely , Arnod, Chhoti Sadri, Dhariawad, Peepal Khoont and Pratapgarh. 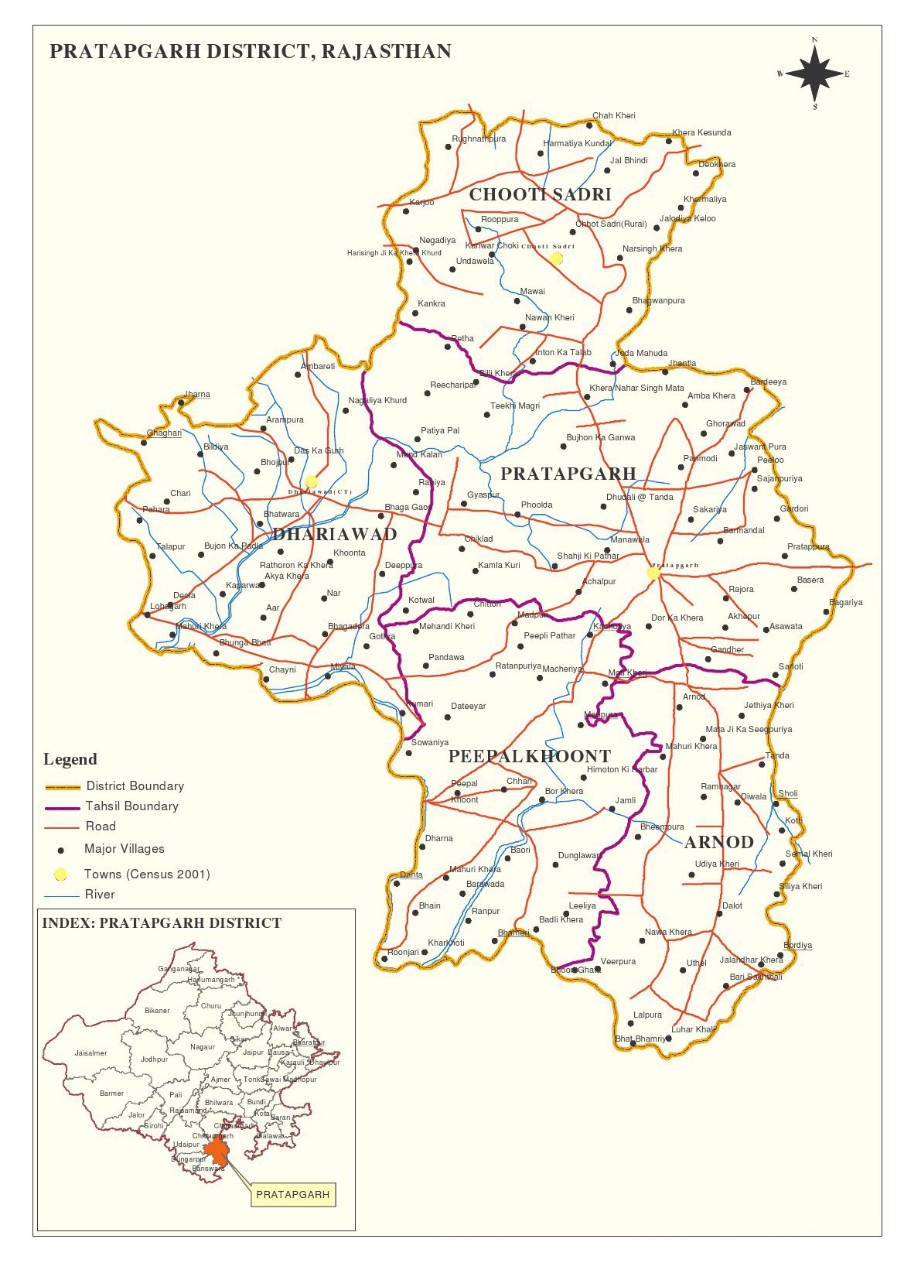 In the 14th century, Maharana Kumbha (1433–1468) ruled ruled mewar with capital at Chittorgarh. Due to a dispute, Kumbha expelled his younger brother Kshemkarn (1437–1473), from his territory. Kshemkarn’s family too refuge in the Aravali ranges, in the southernmost part of Mewar regime.

As the climate of Devgarh was not found to be suitable by the royal family, one of the descendants of Surajmal, Maharawat Pratapsingh of 10th generation (1673–1708) started to build a new town near native village Devgarh in 1689–1699 and named it as Partapgarh,

At that time, the area of Pratapgarh was reported to be about 889 square miles, whereas Dhariyawad, another small town near Pratapgarh, was founded by Rana Sahasmal, the grandson of legendary Maharana Pratap in the mid 15th century.

After 56 years,  On 26th January, 2008 Pratapgarh  was announced to be an 33rd independent district of Rajasthan after taking Pratapgarh, Arnod and Chhoti Sadri tehsils from Chittorgarh district, Peepal Khoont from Banswara district and Dhariyawad from Udaipur district.

Devgarh is located in Pratapgarh sub-divsion on a small hill. It is also known as “Devliya”. This palace is surrounded by small hills and situatated at average elevation of 1809 feet from sea level. Rajmahal, old Bawadia,  Jain temples are located in Devgarh. A famous temple of “Beejamata” is also situated here, where a fair takes place every year.

A temple of lord Raghunath is placed in Rajmahal itself, where a solar clock is placed on the top of it. The clock tells time according to the light of sun.  The Palace and its vicinity also contain some ponds including Tejsagar and Sonela.

Bhanwar Mata temple was built by King Gori of “Manvaiyani genus” in year 491 AD. Temple is also known as “Bhanwar Mata Shakti Peeth”. It is located in Chhoti Sadri Teshsil of Pratapgarh district.

Thewa is a special art of jewelry making which involves embossing of intricately worked-out sheet gold on molten glass. It evolved in Pratapgarh. Its origin dates back to the Mughal age. Thewa is a traditional art of fusing 23K Gold with multi-coloured glass. The glass is treated by a special process to have glittering effects, which in turn highlights the intricate gold work.

Nathu ji Soni invented the process; the secrets of the craft that passed directly from father to son over the generations remains it in the family only, who call themselves ‘Raj-Sonis’. Many of the members from this family have been awarded by UNESCO, National & State Government.

The major fairs of this region are- Ambamata Fair, Sita Mata Fair, Gautameshwara Fair (on ‘Vaishak-Poornima’) and Bhanwar Mata Fair. Fairs on stipulated dates are also held in small places like Shaulee-Hanumanjee, Gangeshwara-Parsola, Manaa-Gaon, and Gupteshwara Mahadev in and around Pratapgarh.

The district is characterized by undulating topography. The topography of the area is undulating because of the confluence of three different geological formations- Malwa Plateau, Vindhyachal Hills and Aravali ranges. The western, and southern parts are generally plain area. Hills are scattered in Chhoti Sadri, Dhariawad, Peepalkhoont and Pratapgarh tehsils.

The soil is mainly highly fertile Black Cotton Soil made of magma of volcanos.

The major rivers of the district are Jakham, Mahi, and Siwana or shiv. Other seasonal rivers are Som, Era, and Karmoi.

The climate of Pratapgarh is characterized by Sub-tropical dry climate with distinct hot summer, cold winter and rainy monsoon. The highest temperature goes avove 43°C in May-June and the lowest up to 6 °C in December-January. The district also experiences average rainfall during the period from June-September

The thickly wooded Sita Mata Wildlife Sanctuary sprawls over both the Aravali ranges and the Malwa plateau, with three seasonal rivers flowing through the forest. It covers 423 square km area of mainly dry deciduous vegetation and has exceptionally rich flora and fauna.

Another significant place of interest in the Sanctuary 5 km from ‘Tikhi Magri‘ is ‘Lakhiya Bhata‘, where a series of prehistoric animals is engraved on rocks.

Jakham Reservoir is located at village Anuppura of Pratapgarh. It is constructed on river Jakham, which is tributary of river Mahi.