Nagaur is the fifth largest district in Rajasthan with an area of  17,718 Square Kms. It has been divided into 12 tehsils namely . Nagaur, Merta, Jayal, Ladnun, Didwana, Nawa, Makrana, Degana, Parbatsar, Khimsar, Kuchaman City and Mundwa.

Glorified by the bards, the history of Nagaur finds mention even in the Mahabharata. The kingdom of Ahichhatrapur which Arjuna is said to have conquered and offered to his Guru Dronacharya, was perhaps some of the area of the Nagaur district. It was the capital of Jangladesh.

The foundation of city dates back to 4th century BC. Nagas originally ruled over this place and about 7th century onwards the Chauhans became the overlords of Nagaur and it was included in Sapadalaksha.

After independence, Nagaur had the honour of being selected as the place in the country from where the Democratic Decentralisation (Panchayati Raj) process was launched by the late Shri Jawaharlal Nehru, the first Prime Minister of India on the 2nd October 1959.

It is said that Nagaur fort was initially built by ruler of Nag dynasty in 2nd century and was then rebuilt in the early 12th century. This fort has witnessed several battles and has also been altered multiple times. Being one of the first Mughal strongholds in North-India it is an outstanding example of Rajput-Mughal architecture.

It is said that the Nagaur fort was initially built by the ruler of the Nag dynasty in 2nd century, and this 500 year old fort, located on the eastern edge of the Thar Desert was built in about 1523. Mughal Emperor Aurangzeb used to stay at this fort. Black deer roam in herds around this fort.

Nagaur district is well known in the world over owing to the presence of Makrana marble. Marble occurring in the vicinity of Makrana town is so famous that ‘Makrana’ has become the synonymous of marble. Word famous Taj Mahal of Agra: Victoria Memorial, Kolkata: Delwara Jain Temple at Mount Abu and Ranakpur Temple in Pali & other famous monuments of excellent architectural art and beauty are constructed of Makrana marble.

Kuchaman Fort is the oldest & most inaccessible forts of Rajasthan. Situated on top of a straight hill, it possess unique water harvesting system, a beautiful palace and stunning wall paintings. The rulers of Jodhpur used to mint their gold and silver currency here.

Khatu’s old name was Shatkup (six wells). When Shak rulers came to India then they brought two new wells with them which were called Shakandhu (Stepwell) & Kalandh (Rahat). Accoring to Prathivraj Raso, Khatu’s old name was Khatwan. Old Khatu is almost destroyed. Now there are two villages, one is called Bari Khatu & other Chhoti Khatu. On the hillock of Chhoti Khatu a small fort built by Prathviraj Chouhan still stands. An old stepwell is located in Chhoti Khatu, known as Phool Bawadi, is believed to be constructed in Gurjara Pratihara period.

The town of Ladnu in the district has gained its place on the map of the country being the headquarters of the famous ‘Jain Vishwa Bharti’ which has become a centre of spiritual learning & knowledge under the leadership of Acharya Tulsi, a great Jain saint, who has propagated the philosophy of “ANUVRAT” in order to enlighten people in this area of the country.

Also known as Goth-Manglod temple, 40 km away from Nagaur; the oldest temple of the district constructed during the Gupta Dynasty (4th Century), Kul Devi of Dadhich Brahimins.

This village was established in the name of Lok Devta Gogaji and it is believed that Gogaji’s Barat-marriage party had stayed here. 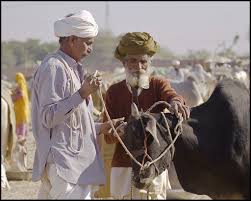 This is the third largest cattle fair in Rajasthan founded by the great King of the Jodhpur Dynasty, Umed Singh in honour of Shri Ramdeoji 56 years back. The fair continues to be held in the month of Magh (January / February). Although the famous Nagauri bull is the prime attraction of the fair, the indigenous breeds of camel, horses, bullocks, buffalos, goat and sheep are in no way less attractive buys. Traders from all over the country participate actively and vie with each other in purchasing high pedigree animals to upgrade their cattle.

It is held in the month of Chaitra (March / April) at Merta city every year. Its history dates back 36 years when this fair was initiated in the memory of the great leader of the farmers Baldeo Ram Mirdha. The Nagauri breed of cattle are traded here in abundance and cattle competitions are the biggest attraction of the fair, providing a glimpse of rural Rajasthan.

This is the second largest fair held every year in the month of Shrawan (August / September) at Parbatsar. It is primarily cattle fair but routine things are also bought and sold. Its history dates back to pre-Independence.

A big part of the district is covered by blown sand and sand dunes which form part of the great Thar district. Active dunes and sand shifting are main hazards to cultivation. Sand dunes are common in the north and western parts, where they arise over 30 meters and are aligned in a north west and south cast direction. Constant deterioration of soil and mining activity has resulted in soil erosion.

The Aravali range of hills passes in eastern and south eastern part of the district. The average elevation of the hills in district is barely 310 meters.

A big salt lake exists about 3 Km., to the South West of Deedwana. A part of the famous Sambhar lake falls in Nagaur district.

There is no perennial river in the district, River Luni is a non-perennial river which flows through the district. The flow of river-Luni depends upon the volume of rain fall it receives during monsoons. The river rises near Pushkar in Ajmer district and after passing over the Western slopes of the Aravali enters Nagaur district in the south and flows through it towards the west for nearly 37 Kilometers before entering Pali district.

It is the Makrana marble which has brought the Nagaur district on mineral map of the world. Other than the marble, limestone of varying grades. i.e. SMS grade, cement grade and chemical grade: tungsten, gypsum, lignite, halite with potash, clay etc. are important mineral resources of district. Mineral wise description is given as below:

Limestone occurring in the district belongs to Bilara Group of Marwar Supergroup. It occurs in three prominent belts.

Salt lake of Nagaur district are considered as an important sources of salt production in the country. The salt lakes of district include: