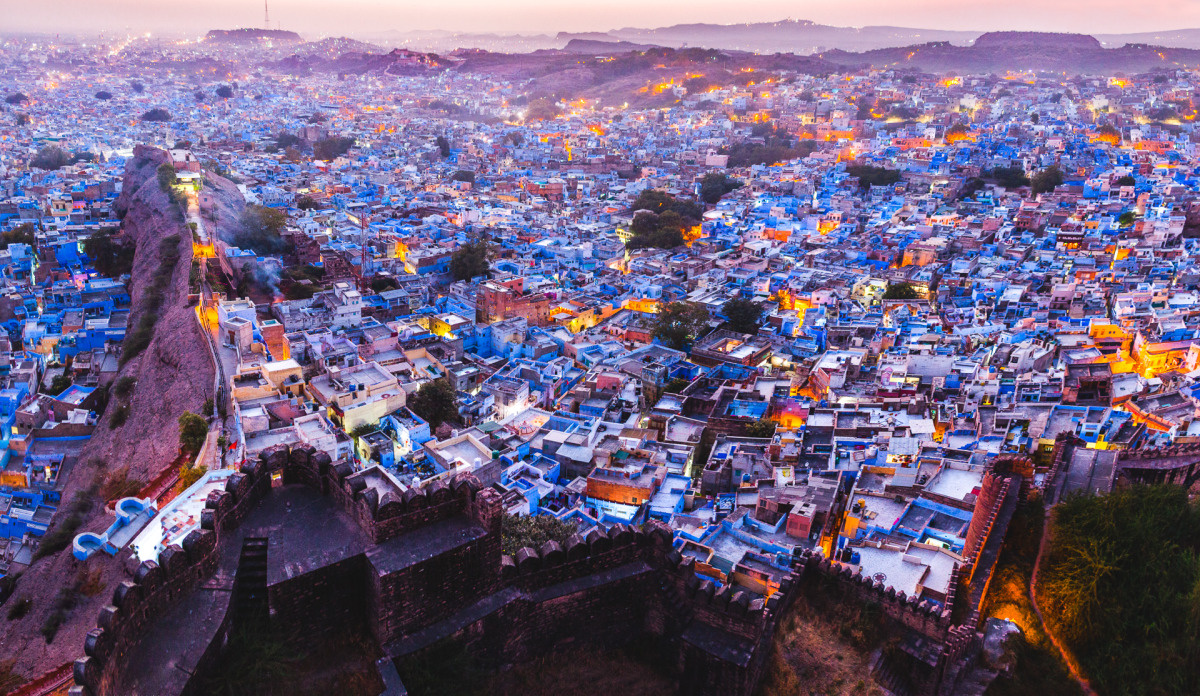 Location, Area and Administration of Jodhpur:

Jodhpur district is located in western part of Rajasthan, located between 26°00′ to 27°37′ North latitude and 72°55′ to 73°55′ East longitude. It shares common border with five districts viz., Bikaner, Jaisalmer in north and north west, Banner and Pali in SW & SE and Nagaur in E-NE.

The district has a geographical area of 22850 sq. kms which is 6.60% of total area of the state and 11.6% of total arid zone of Rajasthan. It has been divided into Mandore, Osian, Phalodi, Bilara, Bhopalgarh, Shergarh, Luni, Pipar City, Baori, Balesar Bap, Lohawat, Tinwari.

The history of Jodhpur revolves around the Rathore Clan. Rao Jodha, the chief of the Rathore clan, is credited with the origin of Jodhpur in India. He founded Jodhpur in 1459. The city is named after him only. It was previously known as Marwar.

Towards the north of Jodhpur is the ancient capital of Marwar, Mandore. This area is of major historical importance and you will find the dewals or cenotaphs of Jodhpur’s former rulers. Unlike the original chhatri-shaped cenotaphs that are typical patterns of Rajasthan architecture, these are built along the lines of Hindu temples.

Situated on a steep hill, Mehrangarh fort is one of the largest forts in India. The beauty and the grandeur of numerous palaces in the fort narrates a saga of hard sandstones yielding to the chisels of skilled Jodhpuri sculptures. The fort is known for its exquisite latticed windows, carved panels, intricately decorated windows and walls of Moti Mahal, Phool Mahal and Sheesh Mahal.

Moti Mahal, as the name suggests, is the Pearl Hall where the royal families held their audience. The hall is known to have glass windows and five nooks that enabled the queens to listen to the proceedings taking place in the Sringar Chowki, The Royal Throne of Jodhpur.

Going by the name, the Phool Mahal or Flower Hall is the most exorbitant of all the halls in the palace. This beautiful chamber is said to be the pleasure dome for the Maharajas. The gold used for constructing the Mahal came from Ahmedabad, Gujarat.

65 Kms from Jodhpur, lies ruins of an ancient city called Ossian. This city is famous for Brahmanical and Jain temples, which belong to 8th and 11th century. The shikhar of Sachiya temple is clustered by two rows of turrets, an ambulatory and a large assembly hall with an elaborate ceiling. This town which was once a great trading centre is an oasis and houses an abundance of peacocks. The largest of the 16 Jain and Brahmanical temples is dedicated to Mahavira.

Located 85 kilometres from the main city, the 400-year old Khejarla Fort is situated in a rural setting. The stunning red sandstone monument, now a hotel, is an example of Rajput architecture. Visitors will be mesmerised by the fort’s picturesque settings, latticework friezes and intricate Jharokas.

Umaid Bhawan Palace was built by Maharaja Umaid Singh in 1929 to counter a famine which had hit the state at the time. It was also known as the Chittar Palace while being constructed thanks to the use of stones drawn from the Chittar hill. The palace was designed by HV Lanchester, a renowned British architect, and was completed in 16 years. Built with sandstone and marble, the architecture of the palace is described as a blend of lndo-Saracenic, Classical Revival and Western Art Deco styles. It is recognised as one of the largest private homes in the world and also one of the more spectacular buildings. It is the only palace built in the 20th century.

This milky white memorial built towards the end of the 19th century as a tribute to the leader Jaswant Singh is a huge tourist attraction. Jaswant Singh, who ruled Jodhpur, invested well in his state. He made attempts to bring down the level of crime, subdue dacoits, built railways and broadly worked on raising the economy of Marwar.

Ghanta Ghar, also known as the clock tower of Rajasthan, is situated in one of the busiest areas of Jodhpur, the Sadar Bazaar. It was constructed by Shri Sardar Singh Ji of Jodhpur. The Sadar Market is quite popular among tourists, who throng the streets to purchase Rajasthani textiles, clay figurines, miniature camels and elephants, marble inlay work and classic silver jewellery.

It is organized at a place locally known as ‘Kaga’ in Jodhpur City. This fair to is held on Chaitra Badi 8(March-April) every year. Nearly thirty thousand people assemble in this fair to pay homage to the image of Sheetla Mata.

A fair is held at Mandore, which is about 8 kms from Jodhpur city, in the memory of the heroes of Rajasthan on the penultimate Monday of Shravana(July-August) every year. Offerings of cash, coconuts and sweets are placed before the idols of deities-Ganesh, Bhairon, Chamunda and Kankali. About fifteen thousand persons of  all communities congregate in this fair.

The hillock has been developed as a beautiful picnic spot. A fair is organized on Ashvina Sudi 10(September-October) every year at a place near Masooria hillock known as ‘Rawan-ka Chabutra’ lacs of people congregate here on this occasion.

The Temple of Chamunda Mata is located in Jodhpur Fort. Chamunda Mata is the family deity of Rathors (the former rulers of Jodhpur State). A fair is held on Ashvina Sudi 9(September-October) every year. More than 50,000 people, who worship the goddess, congregate in the fair.

This fair is held at a place known as Ban Ganga in Bilara town. It takes place on Chaitra Badi Amavasya (March April) every year. It is held in the memory of nine women who became sati at this place. More than 10,000 persons assemble in this fair normally to take a dip in the Ban Ganga River and also take part in singing and dancing.

This fair is held at Jodhpur City on Bhadrapada Sudi 2(August-September) at Massoria hillock, where the temple of Baba Ramdeo is situated. A Large number of people gather on this occasion from various parts of the state. It is locally known as Massoria Baba Ka Mela.

The region comprises three distinct physiography units, namely, the alluvial plains, Escarpments and Ridges and Sand dunes. Land surface of the district is nearly flat and sandy with exception of some parts of Bilara and Osian Tehsils.

The western & north-western parts of district are characterized by sand dunes. Sand dunes of transverse, longitudinal and parabolic variety are present and attain a height of 10 to 40 m.

There is only one important river in the district, viz., Luni, which enter the district near Bilara and flows for a distance of over 75 kms. before entering in Barmer district.

The climate here is of extreme desert condition of scorching summer with hot dry winds and arid conditions. Phalodi is the hottest place in the district where in summers maximum daily temperatures varies between 40°C to 45°C. Occasionally, it rises to 49°C. The winters are quite chilly.

This village is inhabited by the Bishnoi community. They are staunch believers in the sanctity of plant and animal life. Villages are marked by Khejri trees and deers which thrive. Wild animals found in the reserve include Chinkara, Black Buck, Wild boar. Also in the village is the Guda Bishnoi Lake. Around the Guda Bishnoi Lake, one can also see numerous migratory birds like domicile Cranes etc,

Located near the Fateh Pole in Mehrangarh, the Ranisar and Padmasar are adjacent lakes that were constructed in the year 1459. Ranisar Lake was built on orders of Queen Jasmade Hadi, Rao Jodha’s wife while Padmasar Lake was ordered by Queen Padmini of Rao Ganga, daughter of Rana Sanga of Mewar.

Situated on Jaisalmer road, this small artificial lake is an ideal picnic spot. It is like a canvas with a splash of romantic colors. The beauty of the lake stays with you long after you’ve experienced it.

Balsamand Lake is about 5 kilometres from Jodhpur on the Jodhpur-Mandore Road. Built in 1159 AD, it was planned as a water reservoir to cater to Mandore. The Balsamand Lake Palace was built on its shore later as a summer palace. It is surrounded by lush green gardens that house groves of trees such as mango, papaya, pomegranate, guava and plum. Animals and birds like the jackal and peacock also call this place home.

This park is situated on the way to Jaisalmer, about 1 kilometer from Kailana Lake. It offers a bird watching point for visitors and is also home to several animals such as deer, desert foxes, monitor lizards, blue bulls, hare, wild cats, mongoose, monkeys, etc

The lake attracts several migratory and local birds such as the yellow-legged green pigeon, Himalayan griffon and Dalmatian pelican, making it a bird watcher’s paradise.

Minerals have been playing an important role in development of Jodhpur district for last many decades. The district is mainly rich in non-metallic minerals like sandstone, rhyolite, limestone, jasper, granite, clay, murram, kankar, brick earth, bajri etc. The important Major and minor minerals occurring in the district are :­