Jhunjhunu lies between 27° 38′ & 28° 31′ north latitude and 75° 02′ and 76° 06′ east longitude. It is surrounded by Churu district on the northwestern side Hissar and Mahendragarh district of Haryana State in the northeastern part and by Sikar district in the west, south and south eastern part. 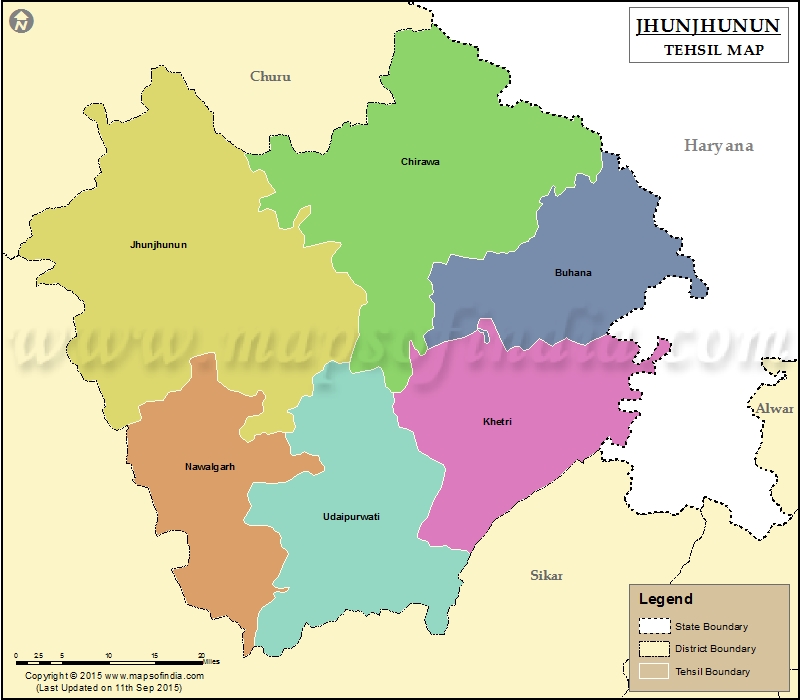 Ancient History of Jhunjhunu, forms part of Indian mythology, with an anecdote that Pandwas, the heroes of the Mahabharata took bath and bathed their weapons in the Surya Kund, Lohargal.

It is said that, it was ruled over by the Chauhan Dynasty in the Vikram era 1045, and Sidhraj was a renowned king. In the year 1450 Mohammed Khan & his son Samas khan defeated the Chauhans and conquered Jhunjhunu.

Mohammed khan was first Nawab of Jhunjhunu. In 1459, his son Samas khan ascended the throne and . Jhunjhunu was ruled over by of the following Nawabs in succession:

The Rani Sati Mela in Jhunjhunu which is in the northern part of Shekhawati, attracts thousands of pilgrims and tourists from all over the globe. The fair is held at The Rani Sati Temple on Bhado Amavasya which means no-moon day.

This fair is held at Nawalgarh city of Rajasthan. Named after Baba Ramdev, he was believed to have magical powers and is believed that he is an embodiment of lord Krishna. Respected by both the Hindus and Muslims this fair is celebrated in the honor of death anniversary of Baba Ramdev.

Physiographically, the district is a mass of rolling sand dunes, hillocks and low lying mounds in its western part. The south eastern part, has off shoots of Aravalli range of hills, which extend from south of Udaipurwati tehsil and continue up to Khetri & Singhana following an almost NE-SW trend. The average elevation is 300-450 mt. above MSL with highest peak near Lohagarh at 1051 mts. above MSL.

Shifting sands, active dunes and soil erosion are hallmark of western and central part of the district. The inland drainage is related to Katli river system. There are four major streams in the district namely Dohau, Chandrawati, Udaipur-Lohagarh ki Nadi & Sukh Nadi.

Jhunjhunu is fairly endowed with various minerals whose industrial use has immensely contributed to the economy of the district. Of these, the most important is the copper belt of Khetri from which mining has been carried out since time immemorial. The different minerals found in the district can be enlisted as under:-