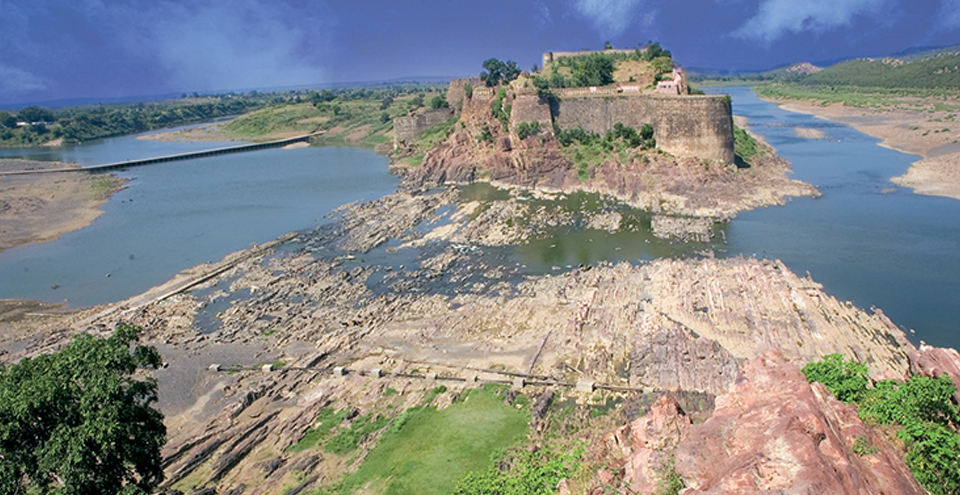 Location, Area and Administration of Jhalawar:

The word Jhalawar, literally means “land of the Jhalas” this being the name of the ruling clan of the former state. Jhala­war district lies in the south eastern corner of Rajasthan between 23° 4′ to 24° 52′ North Latitude &  75° 29′ to 76° 56′ East Longitude. It is bounded in the north, north-east and north-west by Kota district and by Madhya Pradesh in the rest of the district.

Gagron Fort is an example of ‘Jal Durg’, or Water Fort surrounded by waters of  Ahu, Kali and Sindh rivers on three sides. It is included in the list of the UNESCO World Heritage Site. The foundation of this impregnable, magnificent fort was laid in the 7th century. Outside the fort is a Durgah of Sufi Saint Mitheshah, where a fair is held every year during the islamic month of Moharram. Nearby is a monastery of Saint Pipa, a contemporary of Saint Kabir.

Situated in the centre of the town, the Jhalawar fort or Garh Palace,  was built by Maharaj Rana Madan Singh and his successors added beautiful paintings inside the rooms. The Zenana Khas or the ‘Women’s Palace’ has some excellent frescoes on both, walls and mirrors and they are prime examples of the Hadoti school of art.

The Bhawani Natyashala is one of the most unusual theaters in India, constructed in 1921 A.D where Parsi plays and cultural events would take place. This architectural wonder gives one an excellent insight into the world of theatre and art and is known to have an underground passage which allowed horses and chariots to appear on stage.

Jhalrapatan, known as the city of bells, is an ancient walled town, founded by Jhala Zalim Singh in 1796 A.D. It is at the same place where the ancient town of Chandrawati was founded by Parmar Raja Chandrasen and later on ravaged by invaders. The entire town lived within the confines of a wall to protect the trade caravans from Pindaris, as Jhalrapatan happened to be one of the junctions of the caravan route.  The 10th century Sun Temple (Padma Nabh Temple) is the pride of Jhalrapatan. It is one of the best examples of temple architecture with lovely sculptures. Inside the temple, there is idol of Lord Vishnu.

Every year, the Chandrabhaga Fair in Rajasthan attracts travelers, pilgrims and explorers alike with rituals and traditions practiced in this region. Named after the river Chrandrabhaga, it is considered very sacred by the people of Rajasthan.On the full moon night of Kartik purnima devotees take a holy dip in the near by river. A group “Deep Daan” (Offering of lamps) event and cultural programs are of special interest and help tourists acquaint themselves with the people and their culture.

The topography of the area is highly undulatory comprising continuous ridges and broad valleys of Vindhyan sandstones and shales, extensive wide plateau, flat topped conical and isolated hills and cultivated plains of Deccan Traps and the alluvial plains.

As a result the district falls in the following physical divisions:

South part of Jhalawar district has the characteristics of the Malwa Plateau, an area of rounded bare hills interspersed by plains. Jhalawar district is an expanse of fertile plain having rich black-cotton soil. The Jhalawar plains stretches in a wide belt from Bhawani Mandi in the west almost up to Asnawar in the east and is bounded on the northern, eastern and southern sides by the Mukandara hills. This is fertile, well watered region crossed by the Ahu and Kalisindh rivers and a number of lesser streams.

Jhalrapatan stands on Vindhyan strats at the northern edge of the great spread of basaltic rocks known as Deccan trap formation, the northern area of which is also called the Malwa trap.

The rivers and streams of the district belong to the Chambal river system. Except in Gangdhar tehsil, the general flow is from south to north. For the sake of convenience, the rivers of Jhalawar may be divided into two groups — the western group and the eastern group.

Generally speaking, the Jhalawar rivers have deep beds with the result that water level is below that of the surrounding countryside and hence canals cannot be dug for irrigation.