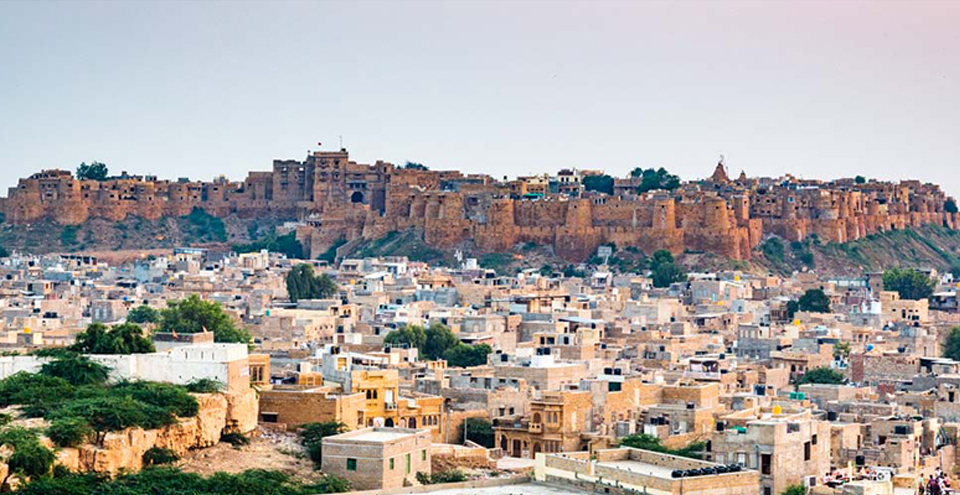 Location, Area and Administration of Jaisalmer:

District Jaisalmer is located within a rectangle lying between 26°.4’ –28°.23′ North Latitude and 69°.20′-72°.42′ East Longitude. It is by bounded by Barmer in the south, Jodhpur in the east and Bikaner in north-east. The western boundary of the district is a part of Indo-Pak international border. The length of international border attached to District Jaisalmer is 471 Kms.

Jaisalmer is the largest district of the state with 38,401 sq. km. area. The district is divided into 4 tehsils namely Jaisalmer, Pokaran,  Fatehgarh, Bhaniyana.

Jaisalmer kingdom was established in south-western Rajasthan . Once seat of Bhatti Rajputs, has been nicknamed “Golden City” owing to yellow sandstone structures and the gold-coloured desert surrounding it.

Akal Wood Fossil Park is a fossil park where stood a forest 180 millions years ago. Then the area submersed in to the sea and the tree trunks got preserved in the form of fossils. The fossils are said to represent non-flowering plants and provide a clue to the age of the deposition of sediments.

Also called as Golden Fort or “Sonar Kila”, it is a world heritage site. It was built in 1156 AD by  Rawal Jaisal and stands on  Trikuta Hill ( the tripple peaked hill ) among an undulating sea of sand.  The fort is built in Sandstone, protected by high walls, approachable through four successive gates, the Akhaiy Pol, the Ganesh Pol, the Suraj Pol and the Hawa Pol.

One of the most exquisite buildings in the walled city, which truly exemplifies the architectural style typical of erstwhile Rajputana. It is five storeys high and the extensive corridors and chambers are supported by intricately carved pillars.While the haveli has lost some of its early glory, a few paintings and mirror work art can still be seen on the inside walls.

Carved by Lalu and Hathi, two brothers for the Prime Minister of State, Nathmalji in 19th century. The most interesting fact is that the brothers worked separately, one on the right side and other on the left side, the result is a absolute symphony epitomizing the side by side symmetry during construction. The haveli is richly carved and the inner chambers are decorated with miniature paintings.

This haveli was built in the first half of the 18th century by Salim Singh, a powerful Chief Minister of Jaisalmer and a part of it is still occupied by descendants of the original residents. The high arched roof is supported by carved brackets designed in the shape of peacocks.The five stroryed structure dominates the skyline of the walled city due to its form.  The haveli begins with a narrow dimension below with an elaborate projecting balcony on the top storey. It is distinguished by the blue cupola roof.

Literally meaning Big Garden. This garden complex houses chhatris or royal cenotaphs of the Maharajas of Jaisalmer state, including that of Jai Singh II. The location of the garden is such that it offers wonderful sunset vistas to tourists.

84 medieval villages were abandoned by the Paliwal Brahmins overnight. The two most prominent of them are Kuldhara and Khabha, located about 18 and 30 kilometres respectively from the southwest of Jaisalmer. The ruins of Kuldhara and Khabha are fine examples of architectural excellence of that era and are a treat for shutterbugs.

Ludarwa is also known as ancient Capital of Jaisalmer, but it is more famous for the Jain temples and Kalp Vraksh (The wish tree). The architecture and carving on the stones is faboulus. This place is having very high relegious values for the Jain community the Lidrwa is among there main relegious places. every year somany Jain peoples come to here for their worship. The wole temple is having very fine carving on every piece of stone used to construct the temple.

Tanot Mata Temple is located 120 kms from Jaisalmer HQ. Tanot Mata is considered to be a reincarnation of Goddess Hinglaj. There are tales, that during the 1965 India-Pakistan war, Tanot was under heavy attack and shelling. However, none of the shells or bombs fired at the temple exploded.

The fairs and festivals reflect the multi facets of the rich Rajasthani culture. The major festivals celebrates are Holi, Dussehra, Ram Navami, Diwali, Gangaur, Teej and Basant Panchami, Muharram and the two Eids.

Organised by the Department of Tourism around January-February, the Desert Festival is the best place to enjoy rich and colorful Rajasthani folk culture. The high points of the festival are puppeteers, acrobats, camel races, camel polo, folk dances, etc.It has, on display, some of the most fondly preserved components of Rajasthan’s rich culture including fire dancers and Gair dancers of Barmer. The Sunset desert safari at Sam dunes is a special attraction for tourist.

Gangaur is widely celebrated in the entire state of Rajasthan and Jaisalmer too celebrates the festival with huge fervor. Watch women dressed in the most vibrant colors and singing traditional songs during this 18-day festival.  Longing for a husband like Lord Shiva, unmarried women worship Lord Shiva and Goddess Parvati. Idols are decorated during this festival and later immersed in water on the last day of the festival.

Ramdevra Temple is located 12 kilometres from Pokhran on the Jodhpur – Jaisalmer route. It is dedicated to renowned saint Baba Ramdevji. Between August and September, a large fair known as Ramdevra Fair is held here, and it attracts large numbers of devotees who sing devotional songs all night long.

Jaisalmer District, a part of the Great Indian Thar Desert, is sandy, dry and scorched. The terrain around, within a radius of about 60 kms is stony and rocky. The area is barren, undulating with its famous sand dunes and slopes towards the Indus valley and the Runn of Kutch.

In the vicinity of Jaisalmer town the sand is stony containing numerous rocky ridges & hard undulating plains formed of limestone and sand stone. There is no single perennial river in the district. However with the construction of Indira Gandhi canal the northern part of the district has become green & irrigated.

The Desert National Park displays the best of the Thar desert’s ecosystem and its varied wildlife. The Park is formed of undulating sand dunes, jagged rocks, dense salt lake bottoms and inter-medial areas. Various species of animals such as black buck, chinkara and desert fox inhabit the Park. The highly endangered Great Indian Bustard, one of the world’s heaviest flying birds, can also be seen here. In winter, the park hosts an incredible variety of migratory raptors such Himalayan and Eurasian Griffon Vultures, Eastern Imperial Eagle, and the Saker Falcon.

Gadsisar Lake was constructed in the 14th century by Maharawal Gadsi Singh to meet the water needs of his arid lands. Considering its importance, many small temples and shrines were constructed around it, transforming it into a pilgrimage centre and a tourist attraction.

Jaisalmer district is renowned for its mineral wealth. It occupies a significant position on the mineral map of the state. It possesses a wide range of mineral resources and offers considerable potential for further.