Hanumangarh is one of the northern most district of Rajasthan, located between 29° 5′ to 30° 6′ North Latitude and 74° 3′ to 75º 3′ east Longitude. The district is surrounded by Churu in south, Sri Ganganagar in west, Punjab and Haryana in north and east respectively.

The district has area of 12,645 km², which is divided into seven tehsils: Hanumangarh, Sangaria, Rawatsar, Nohar, Bhadra, Tibbi and Pilibanga for the purpose of administration.

The Hanumangarh district has a significant place in the ancient history.Excavations at Kalibanga and Pallu have revealed the ancient civilizations. The remains found at Kalibangan in 1951 reveal that this area was a part of nearly 5000 years old Indus Valley Civilization. The district has more than 100 ‘Mounts’ where the remains of ancient civilizations have been buried. The remains of including human skeleton, unknown scripts, stamps, coins, utensils, jewelry, toys, statues have been kept at Museum at Kalibangan and National Museum, New Delhi.

During early times, Hanumangarh was the kingdom of ‘Bhati’ Rajputs.  Bhupat, son of Bhati King of Jaisalmer founded the city and named it as Bhatner, in the memory of his father. Further, he also built Bhatner Fort in 295 A.D. Since then, rulers like Timur, Ghaznavis, PrtihviRaj Chauhan, Akbar, Qutub-ud-din-Aybak and Rathores had captured this fort.

Finally, in 1805, the Bhattis were defeated at Bhatner by Raja of Bikaner Soorat Singh. Since this conquest occurred on Tuesday, which is considered as the day of Lord Hanuman, the Soorat Singh changed the name from Bhatner to Hanumangarh.

In his recent research History, Dr. G.S.Devra has established the area of Talwara lake as the historical famous field of Battle of Tarain between Mohd. Ghori and Prithviraj Chauhan. The contemporary writers have described Talwara lake as Mauj-e-Aab and Bhatner fort as ‘Tavar Hind’ fort.

Kalibangan is a part of the ancient Indus Valley Civilization that is some 5000 years old. It has not only the relics of the Harappan settlements from the 2500 BC – 1750 BC, but also the Pre-Harappan settlements from the 3500 BC – 2500 BC. The excavations at Kalibangan revealed Harappan seals, human skeletons, unknown scripts, stamps, copper bangles, beads, coins, toys, terracotta and shells, wheels, jewellery, utensils, toy carts, markets, remnants of wells, bathrooms, graves, a fort and streets.

The museum was established in 1983 to store and exhibit the materials that were excavated from the archeological site of Kalibangan between 1961 and 1969. The Archaeological Museum is located  in Kalibangan on the southern shores of the River Ghaggar.

The Bhatner Fort, otherwise known as the Hanumangarh Fort, is located on somewhat elevated land with gigantic barricades along the banks of the River Gaggar in the centre of Hanumangarh. In 295 AD, Bhupat, son of Jailsamer’s King Bhatti built this strong fort. Since then, rulers like Timur, Ghaznavis, PrtihviRaj Chauhan, Akbar, Qutub-ud-din-Aybak and Rathores had captured this fort. The strength of this fort has been mentioned in the autobiography written by Timur called “Tuzuk- e- Timuri.” Even Mughal Emperor Akbar described this fortification in his book “Ain- I- Akbari”.

It has many towering gates surrounding the fort and many big rounded bastions that stand at intervals. There are three statues, which bear inscriptions, and an ancient building called “Jain Pasara” is situated inside the fort. There is also a tomb inside this fort, where Sher Khan is kept. Sher Khan was the nephew of Sultan Ghiyas-ud-din-Balban (1266 – 1290) as well as the Governor of the Fort.

The temple is located at Shri Goraknath Teela, Gorkhana in Nohar tehsil. There have been nine Siddhas in the Nath cult, the foremost of them is Shri Gorakh Nath who was an accomplished yogi. This place is said to be the site of ascetism of Shri Gorakh Nath where his fire place (Dhuna) is even today present. It is also believed that Shri Gogaji met Shri Gorakh Nathji here and became his principal disciple.

The Dhuna Guru Gorakhnath is on a mound, hence it is called Gorakh teela.Dhuna of Gorkh Nathji is also an object of worship. In this temple there is a stone image of Goddess Kalika which is made of stone and is in standing posture having the size of 3 ft. Side by side is the black stone idol of Bhairuji of the equal size. By them is the Shiva family and other Samadhis (entombments) of the yogis. 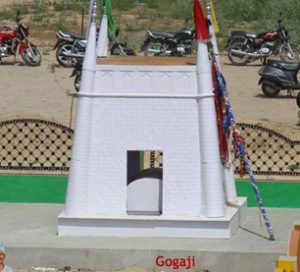 The 950 year old temple is located at village Gogamedi in Nohar Tehsil. The temple of Gogaji is a combination of Hindu and Muslim style of Architecture. The temple is built on a high mound. Inside the temple is the shrine of Gogaji, is engraved statue can be seen in the form of a warrior riding horse, with a lance in hand and snake around is neck. Thus the statue appears to be of a valiant knight undaunted and confident. The temple is visited by all caste and all communities.

This is an ancient temple situated on the banks of Ancient Sarasvati river(Ghaggar river). It was repaired and renovated by Maharaja Ganga Singh Ji of Bikaner. The Maharaja was devoted to Goddess Bhadra Kali, one of the many forms of Godess Durga. The idol of Bhadra Kali in red stone in enshrined here. The Temple has a High Shikhar of a rounded shape. While the temple has no circumambulatory path. It has a Sabha Mandapa or a prayer hall. A Verandah, a sacrum sanctorum and a Kitchen are also there.

The old Sila Mata – Sila Peer Temple is a mark of communal harmony. Located close to the bus stand of Hanumangarh City, the idol of this temple is worshipped by Hindus, Sikhs and Muslims.

Shri Kabootar Sahib Gurdwara is located at a distance of about 80 km in the town of Nohar. This temple was constructed to celebrate the historic visit of Guru Gobind Singh in the month of November,, 1706.

The historically important Gurdwara of Shaheedan Da is located in the city of Hanumangarh. In the 18th century AD, when this gurdwara was constructed, it was named after two martyrs.

The district has plain topography covered with a thick layer of alluvium and wind blown sand. It displays a general slope towards west with the gradient of about 4-5 metre per kilometer. The sand dunes are generally 4 to 5 metres high except in the south western part where they are more intensely developed, being sometimes 10 to 15 metres in height.

Geology is marked by a thick cover of blown sand and alluvium except for a few isolated patches of Recent calcareous and sandy sediments associated with gypsite/ gypsum.

The height of both the districts varies between 168 and 227 m. above the mean sea level. Ghaggar river, locally known as Nali, is an ephemeral one and has northeast to southwest course near the town.

The major work of the district is farming; major crops include rice, millet, cotton, wheat, and vegetables.