Dungarpur district is the third smallest district in Rajasthan, situated in the Southern part. It lies between 23.20′ and 24.01 N latitude and 73*.22′ and 74.23′ E longitude. . It is bounded on the north by Udaipur district and on the east by Banswara district. On its South and west, it has common border with state of Gujrat.

Dungarpur has an area of 3781 sq. Km’s which is divided into 5 tehsils Aspur, Dungarpur, Sagwara, Simalwara and in 2007, new tehsil of Bichiwara (Bichhiwara) was created out of the western part of Dungarpur Tehsil. 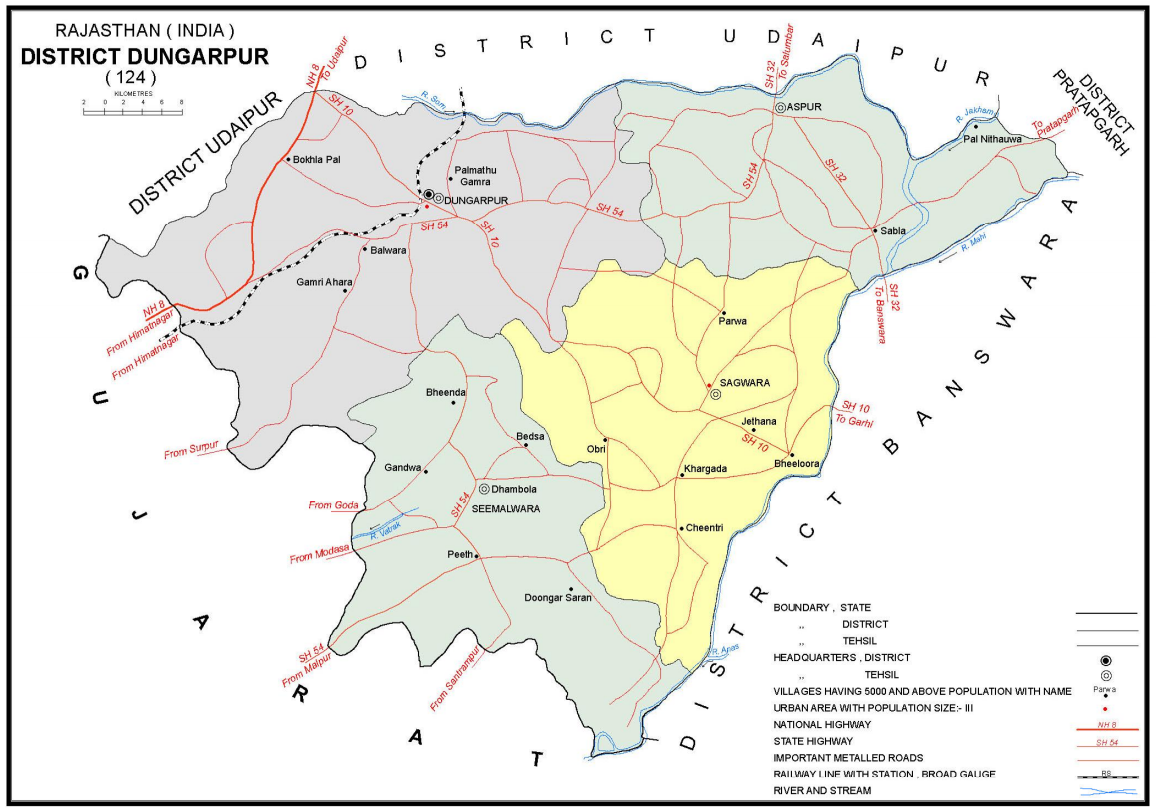 The material remains of the Ahar civilization discovered in Mewar region constitute remnants of the civilization which may date back to 4000 year ago. From Ahar this culture extended to other centers in the south-east of Rajasthan including parts of present Dungarpur and Banswara district.  As a proof, silver coins belonging to 181-353 AD have been unearthed in thousands from Sarwaniya village in Banswara district,  also a part of ‘ Bagar’.  The coins establish that this territory was, then, ruled by Kshtrapas or Satraps of the Saka, inhabitants of area lying between Iran and Afghanistan. They entered Afghanistan and India sometime in the first century of the Vikram Era.

However the Gupta rule over this tract cannot be ascertained with exactitude. Thereafter, the territory may have formed a part of the kingdom of Vallabi. Bagar is said to have been invaded by the Arabs between 725 A.D. and 738 A.D. However, their attacks were repelled and they were expelled from these parts.

From the time the parmars of Malwa came to rule Bagar, we get a clear and continuous history of this area. In 1197, Samant Singh, the eldest son of the ruler of Mewar, Karan Singh, the Guhils of Mewar (Udaipur) established their suzerainty in this area.

It is mentioned in the ‘Khyats’ that Maharawal Veer Singh Dev, the Sixth descendant of Sawant Singh of Mewar, assassinated powerful Bhil Chieftain  Dungaria  and took possession of Dungaria’s village and founded that town of Dungarpur in 1258 A.D.

It was in 1945 that the ‘Dungarpur Rajya Praja Mandal’ came into existence and a year later in 1946, a demand was made for grant of responsible Government under the aegis of the ruler. In March, 1948 the ruler announced the grant of responsible Government. However, on the inauguration of the United States of Rajasthan  the local Government came to an end when the administration of the State was handedover to ‘ Rajpramukh’ of the newly formed union of State and Dungarpur was constituted as a district of the United States of Rajasthan.

Juna Mahal (Old Palace) is a 13th century, seven-storeyed edifice. It is built on a high platform constructed from Pareva stone and its rugged exterior gives it a resemblance of a citadel. It has been elaborately planned with fortified walls, watchtowers, narrow doorways and corridors to delay the enemy for as long as possible. What lies inside is a complete contrast to the exterior. Visitors will be spellbound by the beautiful murals, miniature paintings and delicate glass and mirror work that adorn the interiors.

The lake is famous for the shrine of Shrinathji that rests on its banks. The shrine complex contains numerous exquisitely carved temples and one core temple, the Vijay Rajrajeshwar Temple. This temple of Lord Shiva displays the skilled craftsmanship of the famed sculptors or ‘shilpkars’ of Dungarpur.

The Badal Mahal, built using Pareva stone, is another splendid palace of Dungarpur. Located on the banks of GaibSagar Lake, it is renowned for its elaborate design and a fusion of the architectural styles of the Rajputs and the Mughals. The monument comprises two stages, three domes and a veranda. Each dome sports a carved half ripe lotus while the largest dome sports three.

The temple Boreshwar Mahadeo was built during the reign of Maharawal Samant Singh sometime in 1179 A.D. It is situated on the banks of the Som river.

On the banks of Som river, there is an old and beautiful Shiva temple called Deo Somnath built in the 12th century. Built of white stone, the temple has imposing turrets. One can see the sky from within the temple. Though there is a perfect adaptation of parts in the masonry, yet it gives the impression that individual stones are crumbling. The temple has 3 exits, one each in the east, the north and the south. The entrance gates are two storied The Garbha Garah has a high dome. In front of it is the Sabha Mandap – built on 8 majestic pillars. There are Twenty Torans of which four still exist. Others were destroyed by the flood waters of the Som. The idol of the deity is in a chamber, eight steps below and the entrance is from the Sabha Mandap. There are several inscription by pilgrims and the oldest belongs to 1493 A.D. Several warriors were cremated near the temple and memorials have been raised in their honour.

At a distance of 58 kilometres from Dungarpur, located on the banks of River Mahi, is a hamlet called Galiakot. The place is known for Syed Fakhruddin’s shrine. He was a renowned saint who was buried in the hamlet after his death. The shrine is made from white marble and has his teachings engraved on it walls. The inner portion of the dome is decorated by beautiful foliage while teachings of the Quaran are engraved in golden letters on the tomb.

Nagfanji is renowned for its Jain shrines and not only does it attract devotees from Dungarpur but also tourists who travel from far to see the temple. The temple houses statues of Devi Padmawati, NagfanjiParshwanatha and Dharnendra.The Nagfanji Shivalaya,which is located close to this temple, is also a tourist attraction.

MaharawalPunjraj built this temple in the year 1623. The idols of Shri Radhikaji and GoverdhanNathji are the main attractions. The complex also houses several shrines dedicated to Shri BankeBihariji and Shri Ramchandraji.

This ancient shrine is located on the banks of the Gangdi River about 3 kilometres from Dungarpur. The area around the temple also houses other attractions such as Bhulbhulaiya, Madhavrai Temple, Hathiyon Ki Agad and several inscriptions.

The Beneshwar temple, containing the most revered Shiva Linga of the region, is situated on a delta. formed at the confluence of Som and Mahi rivers. The Linga is believed to be Swayambhu or self created .It stands five feet high and is spilt broken at the top in five parts. Just near the Beneshwar temple is the Vishu temple constructed in 1793 A.D. by Jankunwari, daughter – in law of Mavji, a highly revered saint and believed to be an incarnation of Lord Vishnu. The temple is said to be constructed at the place where Mavji spent his time praying to God. Two disciples of Mavji called Aje and Vaje built the Laxmi Narayan temple. Though these are other Gods and Goddesses, People identify them as Mavji, his wife, his son, his daughter-in law and disciple Jiwandas. Besides these temple, there is also a temple of Lord Brahma.

The biggest tribal fair held at Beneshwar which is at the confluence of Mahi, Som and Jakham rivers. A large number of tribals from Rajasthan, Guarat and Madhya Pradesh gather to immerse the mortal remains of the dead. This fair is held on Magh Purnima,in the month of February, which is considered a holy period in this region. 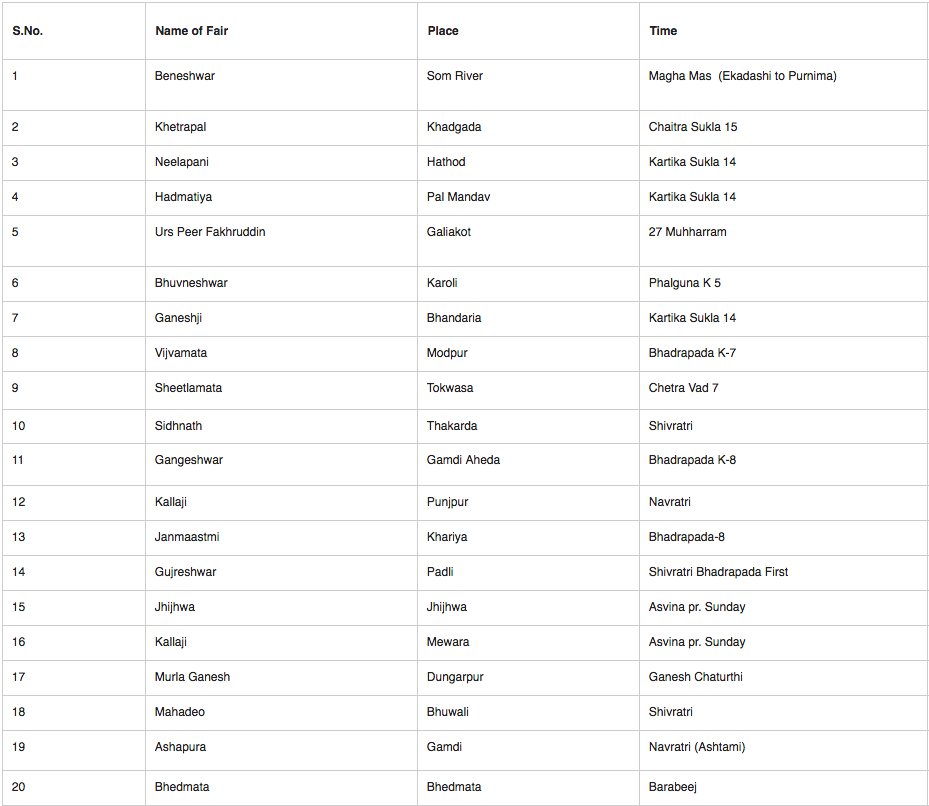 A major part of the district is characterized by a rugged terrain. The North East- South trending Aravali hill ranges are prominent in the western part. The ground elevation of the area is about 320 mts. While the hills rise upto 552mts. above MSL. Som & Mahi the two major rivers of the District. The area is drained by a network of streams that discharge their water into the Mahi river.

Dunagarpur has a rich assemblage of minerals. The important one are Soapstone, Fluorrite, Green marble Base matail etc.

Dunagarpur has a rich assemblage of minerals. The important one are Soapstone, Fluorrite, Green marble Base matail etc.

The largest fluorite deposits in the state are located in mandoo ki-pal, areas in this district. Other important localities are kahila Remore, Mata Bhagat, Rahatwali Thurwali, Umeria, Singhwali and Nawagaon. Fluorite is used as flux in metallurgy of iron and aluminum. Acid grade fluorite is used manufacture of Hydro-Fluoric acid which is subsequently used in glass and chemical industries.

Crystalline pink-grey-white limestone occurs in two belts in Dugarpur district near sabla, Mungar, Harwar etc. villages. Another limestone band occurs near Harwar, Nithuwa villages. It is off white to grey in colour. It is also being used as marble.

There are large Occurrences of slates and phyllites which are being mined at places for use as building stone. Phyllites are excavated near Rampura, Denandi, Baramagra etc.