Dholpur is the smallest district of Rajasthan with an area of 3034 Square Kms. Administratively, Dholpur has been divided into six Tehsils Dholpur, Bari, Baseri and Rajakhera, Saipau & Sarmathura. 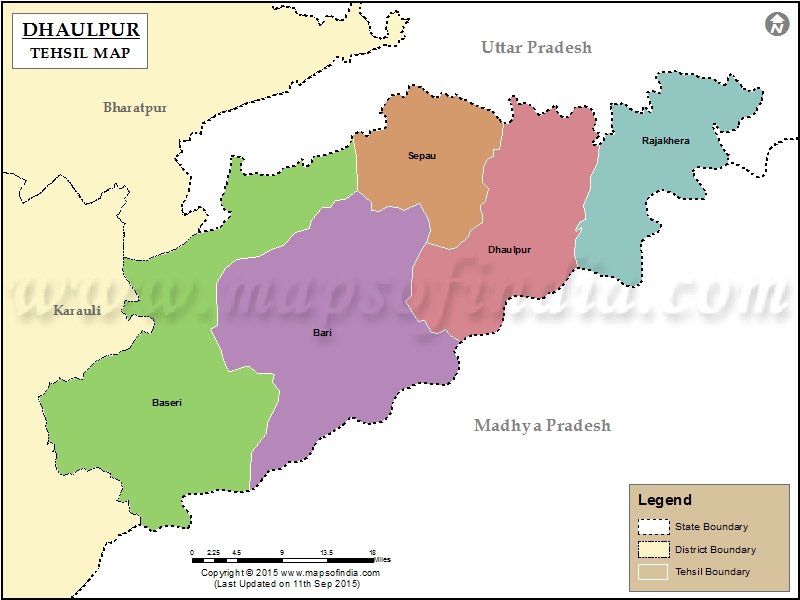 In Second Anglo-Maratha War between the British and Marathas at Laswari on 1 November 1803, Lord Lake defeated Sindhia. In this war the Jats helped the British. Later,  the British concluded a treaty with the Jats and with their help defeated Marathas and won back Gwalior and Gohad from them. The British kept Gwalior with them but returned Gohad to the Jats in 1804.

Gohad was handed over to Marathas under a revised treaty dated 22 November 1805 between Marathas and British. Under the treaty, Gohad ruler Rana Kirat Singh was given Dhaulpur, Badi and Rajakheda in exchange. Rana Kirat Singh moved to Dhaulpur in December 1805.  Thus the Rana Jat rulers of Bamraulia gotra ruled Gohad for 300 years from 1505–1805 and after that their rule was transferred at Dholpur.

Muchchhkund is about 4 km from the town of Dholpur. It is an ancient sacred place. It commands a picturesque view. The place is named after Raja Muchchhukand, the 24th of the Suryavanshi Dynasty (the solar race) who is said to have reigned nineteen generations before Lord Ram. According to legend, Raja Muchchhkund was sleeping here when demon Kaal Yaman (while pursuing lord Krishna) accidentally woke him up. The demon Kaal Yaman was burnt to ashes because of a divine blessing to Raja Muchchhkund. It is now a sacred place for pilgrims.

Located 27 kilometres from Dholpur (and 5 kilometers from Bari) is a picturesque lake called Talab Shahi. The lake and the palace were built in 1617 A.D. as a shooting lodge for Prince Shah Jahan. The palace and the lake were later maintained by the ruler of Dholpur. The lake attracts a large number of winter migratory fowl such as pintail, shoveller, red crested pochard, common pochard, tufted duck, garganey teal, wigeon and fadwall.

Located on Banks of river Chambal, Shergarh fort is said to be first constructed by Raja Maldev during Kushan Period. In 1540, Shershah reconstructed the fort and named it Shergarh.

Range of sand stone hills runs from Dholpur town in a south western direction attaining at one place on attitude of 356.91 Meters above sea level. The land in Dholpur district is fertile and rises from alluvial plain near the level. Hills and broken grounds characterize almost the whole territory, along the valley of the Chambal as irregular and lofty wall of rocks separate the land on the river from the uplands .

Van Vihar, an old wildlife reserve of the rulers of Dholpur is spread over an area of 25.60 km2 over Vindhyan Plateau, supports a rather open stunted growth of Dhok and Khair trees. It is inhabited by animals like Sambhar, Chital, Blue Bull, Wild Boar, Sloth Bear, Hyena and Leopard.

A waterfall in Sarmathura. It is the main tourist spot in whole district. It is visible in rainy season [July–September]. Besides this, Damoye has a long and green forest range with wild animals.

The Chambal river remains one of north India’s most unpolluted rivers, home to a rich diversity of flora and fauna. National Chambal (Gharial) Wildlife Sanctuary contains the rare Ganges river dolphin. The sanctuary was founded in 1978 and is part of a large area co-administered by Rajasthan, Madhya Pradesh and Uttar Pradesh, within area of 5,400 km². Approximately 400 km of the river is within the reserve. Apart from the Ganges river dolphin, the other inhabitants of the sanctuary include mugger crocodiles and gharial (Gavialis gangeticus). Migratory birds from Siberia form its rich avian fauna.

The mineral wealth of the district is constituted mainly by sandstone & limestone. A total of 87 mining leases are existing in the district.

Sandstone: Dholpur district is known for its unique Sandstone. In general Dholpur sandstone is fine to medium grained, compact, resistant to acid, available in different shades and colors and can be easily dressed and chiseled. It takes good polish at cut surface. The colour of the sandstone depends on the constituents of the cementing material. The famous Dholpur sandstone is being used in Rajasthan as will as in neighboring states since centuries as building and dimensional stone. The famous historical buildings like Rashtrapati Bhawan, Red Forts of Agra and Delhi, Vidhansabha Bhawan, Jaipur and many other forts are built by the Dholpur sandstone. It is being used in roofing, flooring, panelling, beams; pillars, door and window sills, cladding, wall fancing, making of statue, perforated windows, jalies and carved decorative articles.

Lime Stone: The Vindhyan Limestone occurs in and along the banks of Chambal river. It is grey in colour, fine to medium grained and massive. At present, there is no mining lease for limestone. The main locations of limestone are Sawar Pali, Basai Dang and Rojai Kalan in tehsil Dholpur.

Masonry Stone: The sandstone which is hard and compact but does not has splittability, is used as masonry stone in the form of Khanda, Gitty & boulders. The leases of Khanda, Gitty, boulders & Bajari are distributed throught the district.