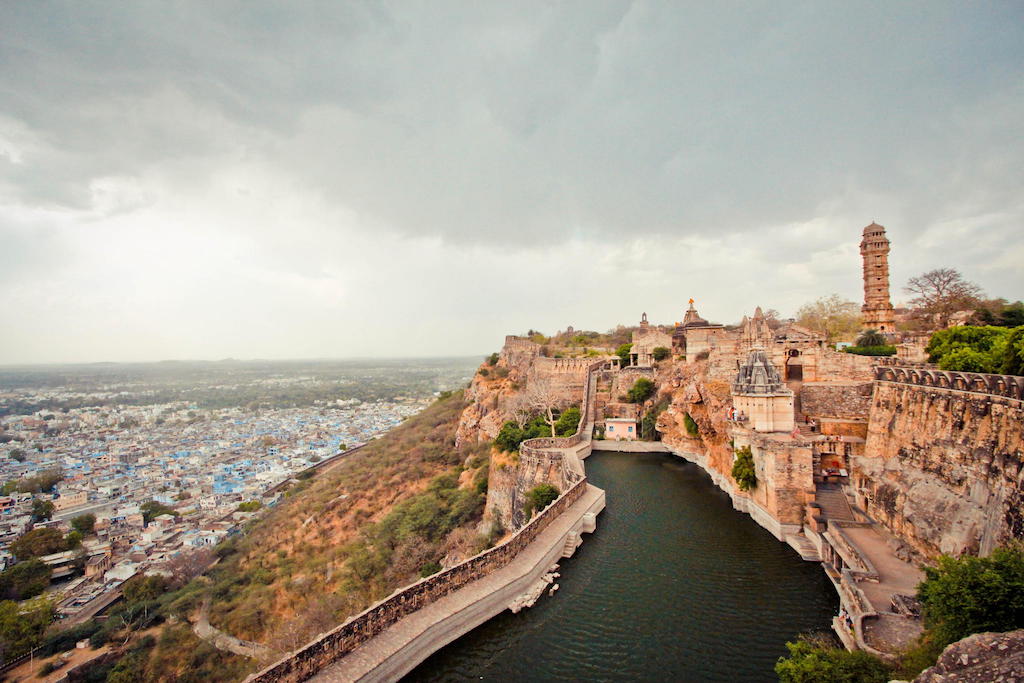 The antiquity of chittorgarh is difficult to trace, but it’s believed that Bhim the legendary figure of the Mahabharata, visited this place to learn the secrets of immortality and became the disciple of a sage, but his impatience to perform all the rites deprived him of his goal, and out of sheer anger, he stamped on the ground creating a water reservoir, this reservoir is called as BhimLat.

Later on, it came under Mauryas or Mori Rajputs. Maan Mori, 7th in line ruled the kingdom till 734 AD when he was killed by Bappa Rawal of the Guhilot clan. Born as Kalbhoj, Bappa Rawal was the founder of a dynasty which later comes to rule Mewar.

Rulers of Mewar: (Chittorgarh as Capital)

Chittorgarh Fort is the largest fort in Asia. The Fort of Chittorgarh is strategically located on the top of a high hilly outcrop of the Aravallis about 180 mabove the plains of the valley drained by the Berach River.  The fort also contains Gaumukh Reservoir, which is a deep tank  fed by a spring. The spring emerges from a rock formation resembling a Gaumukh or ‘cow’s mouth’. The tank is considered sacred by the locals.

One of the most important townships of the Mauryan era in Rajasthan, situated on the banks of river Bairach.  It  was formerly known as Madhyamika, which flourished from the Maurya to Gupta era. The excavations  overhere have  unearthed many interesting facts and have showed signs of strong Hindu and Buddhist influence.

The ruins of the famous temples of babaroli, near Rawatbhata. This town is worth visiting, because of the  group of  ancient temples situated here.

Vijaya Stambh is a huge nine storey tower which was built by Maharana Kumbha to commemorate his victory over the Muslim rulers of Malwa and Gujarat in 1440, the tower signifies the victorious spirit of the Rajput Kingdom after securing a victory over the intruder Mohammed Khilji.The towers stands at a height of 37 meters and compromises of 9 floors offer a great view of the city of Chittorgarh and the Chittorgarh Fort.

Kirti Stambh or the tower of fame is part of the two popular stumbhs or pillars inside the Chittorgarh Palace. Kriti Stambh is a 12th-century tower situated at Chittorgarh fort in Rajasthan, india. Dedicated to the first Jain teethankar Adinath, the stambh is a 22 meter high seven storied tower having a sculpture of Adinath in the second floor.Kirti Stambh is older than another tower in the same fort, known as the Vijaya Stambh(Tower of Victory). The topmost floor of the pillar offers a panoramic view of the whole Chittorgarh city and attracts a large number of travelers, historians and photography enthusiasts.

The Padmini palace is Amazing place to visit in Chittorgarh. It was the residence of Rani Padmini who was known for her gorgeous beauty. The palace is a popular tourist attraction because of its rich architecture and association with the Rajput heritage and history.There is a lotus pond near this palace.Ala-ud-din saw the reflection of Queen Padmini in this pool. He was so captivated and entranced by her that he fought a furious battle with Maharana Ratan Singh (husband of Maharani Padmini). This battle changed the history of Chittorgarh.

Rana Kumbha palace is 15th century palace where Rana Kumbha lived and spent his royal life. This historic monument is very popular among tourists due to its charming and artistic architecture.The founder of Udaipur, Maharana Udai Singh was born in this same palace. Rana Kumbha palace have the cellar where brave Rani Padmini performed an act of jauhar along with other women during an attack of Khilji.

Meerabai, an ardent devotee of Lord Krishna’s, worshipped him at this temple. The structure is designed in the classic North Indian style of temples. It rises from a raised plinth and its conical roof can be seen from far. The temple houses a beautiful shrine surrounded by an open porch with four small pavilions in four corners.

Bhainsrorgarh is an impregnable fort, inhabited from at least the 2nd century BC. It is dramatically positioned between two rivers, the Chambal and Bamani. It had passed through the hands of several clans before becoming the seat of a premier noble of Mewar, the large region around Udaipur and Princely State of the Sisodia clan. It contains five tanks, temples to Devi Bhim Chauri,Shiva, and Ganesh. The present fort is around 260 years old and was built in the 1740s.

Maharana was born on May 9th 1540 in Kumbhalgarh in Rajsamand district of Rajasthan to Maharana Udai Singh II and Rani Jeevant Kanwar. Maharana Pratap is respected and revered as an epitome of valor, heroism, pride, patriotism and the spirit of independence.His birth anniversary (Maharana Pratap Jayanti) is celebrated as full fledged festival every year on 3rd day of Jyestha Shukla phase.

The fort and the city of Chittorgarh host the biggest Rajput festival called the “Jauhar Mela”. It takes place annually to commemorate Rani padmini’s Jauhar, which is most famous. This festival is held primarily to commemorate the bravery of Rajput ancestors and all three jauhars which happened at Chittorgarh Fort. A huge number of Rajputs,which include the descendants of most of the princely families, hold a procession to celebrate the Jauhar.

Meera Bai (1498 – 1547) was a devout follower of Lord Krishna. Meera Bai was Rajput princess born in about 1498 in Metra, Rajasthan. Her father, Ratan Singh, was the youngest son of Rao Duda, ruler of Merta, and son of Rao Duda ruler and founder of Jodhpur. Ratan Singh belonged to the Rathore clan. She was married to Bhoj Raj, ruler of Chittor.

Teej is one of the major festivals in Chittorgarh and is also called as the festival of swings. It marks the advent of the monsoon month of Shravan (August). Swings are hung from trees and decorated with flowers. Young girls and women dressed in green clothes sing songs in celebration of the advent of the monsoon. This festival is dedicated to the Goddess Parvati,commemorating her union with Lord Shiva.

The Gangaur Festival is the colourful and most important festival of Rajasthan celebrated throughout the State with great fervour and devotion by womenfolk to worship Goddess Gauri, the consort of Lord Shiva during July-Aug. Gan is a synonym for Shiva and Gaur which stands for Gauri or Parvati who symbolises saubhagya (marital bliss). Gauri is the embodiment of perfection and conjugal love which is why the unmarried women worship her for being blessed with good husbands, while married women do so for the welfare, health and long life of their spouses and a happy married life.

Rang Teras is a popular tribal fest of Mewar celebrated on the 13th moon night of the month of Chaitra.  Since 15th century, the festivals is being organized where Tribals rejoice the harvest of wheat. Farmers pay their honor to Mother Earth for providing them food for next year.As a part of Celebrations , young men in village perform their valiant skills while dancing.It is also celebrated is Sri Krishna Temples all around North India and ISKCON Temples.

Topographically the district is undulating with scattered hills of the Aravalli ranges. The western southern and northern parts of the district are somewhat plain. A series of hills run North­South forming parallel valleys to the east of Chittorgarh. Bhainsrorgarh area is practically hilly. The district comprises rocks of Bhilwara Supergroup, Vindhyan Supergroup and Deccan Traps.

The main rivers flowing through this district are Chambal, Banas, Berach, Gambhiri, Jakham with smaller rivers like Wagon, Gungali etc. The annual average rainfall is 90cms.

The district of Chittorgarh is good in forest resources as the percentage of total area under forest including hills is reported to be 2407 square kilometers which is 22.17% of total geographical area of the district.The forest coverage is above the state average of above 9% under forest. The major species available in the forest area is salar,teak wood, bamboos, katha etc.

A sanctuary near Bassi, covering an area of 50 Sq km with panthers, wild boars, antelopes, mongoose and migratory birds. The Sanctuary is situated 5 kms from the Fort on the western fringes of Vindhyachal Ranges with series of tableland, gentle slopes and vast streches of large lakes, water channels of which penetrate into the forest. Among the wild animals baghera sar, langur, lakkar bagha, beddia, lomaari, lider etc. with snakes both poisonous and non-poisonous also being found.

The district can be identified as a limestone district of Rajasthan, since the district is endowed with large deposits of cement grade limestone as well as splittable lime stone and sand stone which is used for flooring purposes. Besides these, small deposits of china clay, red ochre, blockable marble etc. are also found in the district.