Located in the western Rajasthan and forming a part of the Thar Desert, Barmer is the third largest district by area in the state. The city is famous for wood carving, pottery, embroidery work and ajrak prints. Several festivals are held in Barmer, Most important being the Mallinath Cattle festival which is held at Tilwara village in remembrance of Rawal Mallinath who was founder of Mallani Pargana.

In the early 13th century, Rao Sihaji, founder of the Rathore clan, conquered this place from the Guhil Rajputs. There is an inscription dated 1295 AD which proves the existence of the Rajput clan in the area in the 13th century. Barmer was under the rule of Maharajakula Sri Samantha Sinha Deva at that time.

In the 14th century, Rajput ruler Jaitmal Rathore built the famous Fort Siwana. The fort is also known as ‘Garh Siwana’. In 1308 AD, Allaudin Khilji attacked the place and the fort came under the Khilji rule. The fort of Siwana was restored by Lutinga Chouhan in the years between 1318 AD and 1320 AD when he was able to defeat the Muslim ruler.

In earlier times, the area was known by the name “Mallinath” (मल्लिनाथ) after Mallinath, the son of Rao Salkha. Mallinath is considered a God and still worshiped by Rajputs. The area around the “Luni” river was called “Malani” or “मलानी”, derived from the name Mallinath.

Barmer is located in the western part of the state forming a part of the Thar Desert and has arid, semi-arid type of climate. The longest river in the district is the Luni. It is 480 km in length and drain into the Gulf of Kutch passing through Jalore.

Most of the desert national park lies in Jaisalmer district. The park is habitat of Rajasthan’s state bird Great Indian Bustard.

Mahabar Sand Dunes are about 5 km away from Barmer which is a sandy site and famous for sunrise and sunset viewing. 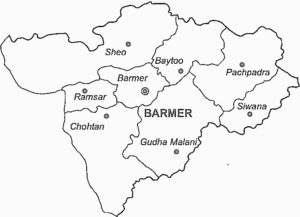 Barmer district is located between 24,58′ to 26, 32’N Latitudes and 70, 05′ to 72, 52′ E Longitudes. The district is located in western Rajasthan, with Jaisalmer to its North, Jalore on its South, Pali and Jodhpur to its East and Pakistan to its West.

The total area of the district is 28,387 square kilometres.