Music instruments of Rajasthan are made ingeniously from a variety of materials available in Rajasthan, that give them peculiar sound. Both percussion instruments and stringed instruments have been used in Rajasthani folk songs.

Shells of dried gourds of all shapes and sizes are used for gorse stems or bamboo segments for flutes and baked clay pots for drums. The folk music instruments of Rajasthan are classified into following major types:

String Music Instruments or Tata Vadya are instruments where sound is produced by the vibration of a string or chord. Here the vibrations are caused by plucking or by bowing on the string which has been pulled taut. In these instruments length of string/wire, degree to which it has been tightened, determines the pitch of the note and also to some extent the duration of the sound. Various string music instruments of Rajasthan include:

Wind Music Instruments of Rajasthan or SUSHIRA VADYA are music Instruments, where air is blown by mouth for music. Sound is produced by blowing air into an hollow column. Here the pitch of the note is determined by controlling the air passage and the melody is played by using the fingers to open and close the in the instrument.

The simplest of these instruments is the flute. Generally flutes are made of bamboo or wood and the Indian musician prefers these due to the tonal and musical attributes of these materials. Excavations of the Indus civilization have shown bird whistles of clay, and seals which show wind and percussion instruments. There is reference in the Vedas to an instrument- veena which was used as an accompaniment to chanting and recitation. There is also mention of a kind of a flute called the Nadi. 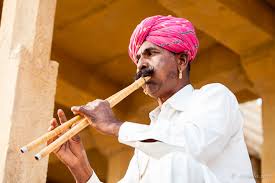 Autophonic Instruments or Ghana Vadya are said Earliest instruments invented by humans. Once constructed, this variety of instrument do not need special tuning prior to playing. These are principally rhythmic in function and are best suited as accompaniment to folk and tribal music and dance. Majority of these instruments made of metal. Various Autophonic Music Instruments used in Rajasthan are:

A percussion instrument or AVANADDHA VADYA produces a sound by being hit with an object. Sound is produced by striking the animal skin which has been stretched across an earthern or metal pot or a wooden barrel or frame. The earliest references to such instruments have been found in the Vedas where there is mention of Bhumi Dundhubhi; this was a hollow pit dug in the ground and covered with the hide of a buffalo or ox which was stretched across the pit. Various Percussion Music Instruments used in Rajasthan are: 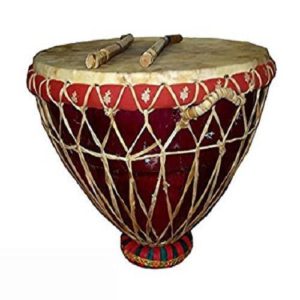