The Union Government has signed aa $220 million loan agreement with Asian Development Bank (ADB) for improving connectivity as well as transport efficiency and safety on State Highways of Rajasthan. The first tranche of $500 million for Rajasthan State Highways Investment Program has been approved by ADB Board in May 2017. The Program will upgrade about 2,000 kilometers of state highways and major district roads to two-lane or intermediate-lane standards to meet road safety requirements.

`Van Mahotsav on July 10 in Rajasthan

This year’s Van Mahotsav programme will be held on July 10 across the state, district, Block and Gram Panchayat level with a focus on water conservation. The State-level Van Mahotsav would be held at Beed Govindpura in Jaipur district.

RPSC pegs marks for interviews at 12.5%

The Rajasthan Public Service Commission (RPSC) will adopt the 12.5% mark rule for all job interviews, with written exams accounting for the remaining marks. The new 12.5% marks for interview will make the selection process transparent as the candidate will be evaluated by the written examination. (Read TOI News)

The commission is also drafting norms for one-time document verification of candidates who appear for different competitive examinations as well as to release a reserve list of candidates after every exam in the future.

Elementary education government school teachers whose students perform best in examinations would be felicitated with Shri Guruji Samman. Best performing teacher would be selected from each district and all the teachers from the 33 districts in the state would be felicitated at an event organised every year.

Every year, the Elementary Education Directorate, Bikaner would be felicitating the teachers selected at the district level at an event organised annually. Rs 11,000 and appreciation letter would also be given to the teachers who would be conferred with Shri Guruji Samman.

In order to bring qualitative change in education through information technology and quiz-based acquisition system in government schools, Project Excellence was launched by Mooney Foundation Jaipur and Education Department, Jaipur with the help of HDFC Bank.

Project Utkarsh has been initated in more than 1400 schools of 9 districts of Jhalawar, Baran, Jodhpur, Udaipur, Sawimadhapur, Hanumangarh, Pali, Ajmer and Jaipur in the state. This will benefit more than 1 lakh students.

Rajasthan gets award for IPD services

Rajasthan came at second position among all states in quality of IPD services. 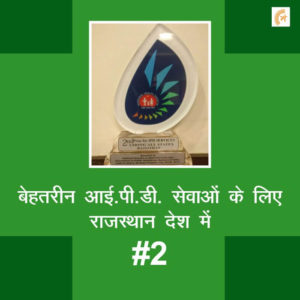