This post lists out the must visit places to see in Ajmer: 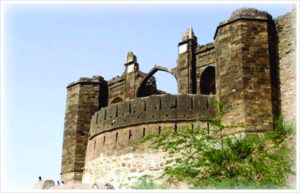 Taragarh fort was first built by Chauhan king Ajaipal on Taragarh Hill. It is also said that Rana Sanga’s brother Prthvi Raj made a portion of for his wife Tara and named it Taragarh.  The fort guarding Ajmer, was the seat of the Chauhan rulers and was again believed to be built by Mughal ruler Akbar.

Taragarh is reputed to be one of the oldest hill forts in India and the world.The battlements run along the top of the hill. The walls are two miles (3 km) in circumference and the fort can only be approached by way of a very steep slope. When it fell to the British Raj, the fort was dismantled on the orders of Lord William Bentinck and was converted into a sanatorium for the British troops.

Adhai din ka Jhopra is actually a Masjid built by Qutub-ud-Din-Aibak, first Sultan of Delhi, in AD 1199 . Sultan Iltutmish had subsequently beautified it in AD 1213 with a screen pierced by corbelled engrailed arches which appears in this country for the first time.  However, a large number of architectural members and sculptures of temples are lying inside the verandah of the complex for safety and security purposes by the department which shows the existence of a Hindu temple in its vicinity during circa 11th-12th Century AD. This mosque, built from the dismantled remains of temples, is known as Adhai-din-ka-Jhonpra possibly from the fact that a fair used to be held here for two and a half days.

Ajmer Sharif, situated at the foot of the Taragarh hill, is the shrine of Khwaja Moinuddin Chishti. It contains the domed tomb of the saint  and  several white marble buildings arranged around two courtyards, including a massive gate donated by the Nizam of Hyderabad and the Akbari Mosque, built by the Mughal emperor Shah Jahan.

Akbar used to come here by foot on pilgrimage from Agra every year in observance of a vow when he prayed for a son. The large pillars called “Kose (‘Mile’) Minar”, erected at intervals of two miles (3 km) along the entire way between Agra and Ajmer mark the places where the royal pilgrims halted every day. 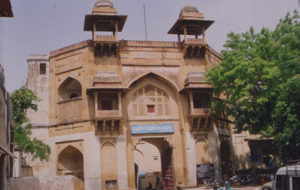 This fort was constructed in 1570 by Akbar and is also called as Daulat-khanna or Magazine. Plans for battle of Haldighati were finalized in this fort in 1576 and Jehangir camped in the fort for 3 years to bring mewar under mughal control. This fort is a magnificent example of Mughal architecture and it is the location from where Salim, as the Emperor Jahangir read out the farman permitting the British East India Company to trade with India. In 1801, control of fort passed to British who converted it into magazine (armory).

Currently, the fort is converted into a state museum and  houses a collection of Mughal, Rajput armour and sculpture. The fort also has beautiful paintings and Janana portion has excellent picchkari works. 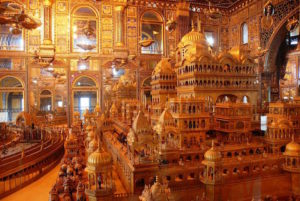 Soniji ki Nasiyan is a Jain Temple located in Ajmer and is a wonderful example of ornate architecture, dedicated to Risabhadev or Adinath. Its entrance is made of red stone and the marble staircase inside is engraved with images of the holy Tirthankars – omniscient teachers of Jain faith who taught righteousness.  The temple was constructed in the late 19th century. Its main chamber, Swarna Nagari (City of Gold), is aptly named so because of the several gold-plated wooden figures it houses within its walls. This famous architectural marvel is also mentioned in Kurt Titze’s book, ‘Jainism: A Pictorial Guide to the Religion of Non-Violence.’

Mayo College was founded in 1875 by Lord Mayo, Viceroy of India. The architecture of the school buildings is in the same style as royal Rajasthani architecture. The school’s main building, in white marble, is a classic example of Indo-Saracenic architecture.

It is an artificial lake built in 1135 -1150 AD by Arnouraj Chauhan, the grandfather of Prithvi Raj Chauhan III. The lake is named after him. The lake is spread over 13 Kilometers. The pavilions or Baradari of Sangmarmar marble at Anasagar were built by Shahjahan in 1637 and the Daulat Bagh Gardens were bulit by Jehangir. There is a Circuit house on a hill near the lake that used to be British Residency. There is an island in the center of the lake which is accessible by boat.

Lake Foy Sagar is an artificial lake built by an English engineer, Mr. Foy in 1892 AD. This work was taken up to provide famine relief through wage employment to locals. Lake Foy Sagar offers a beautiful view of the Aravalli range.

Pushkar Lake around which the Pushkar town has developed is located amidst Aravalli ranges approx. 12 kms to the north-west of  Ajmer city. The mountain range called as Nag Pahar (“snake mountain”) separates the lake from the city of Ajmer. The valley is formed between the two parallel ranges of the Aravalli hills running south-west to north-east. The lake is considered Sacred and a prime Hindu pilgrimage also regarded as “Teerth Raj” in local dialect.

Todgrah-Raoli wildlife Sanctuary is situated in 3 districts including Pali, Ajmer & Rajsamand. It has 475.2 Square kms of area, which is habitat to panther,hyena, wolf, green pigeon and jungle fowl.