The Nobel Prize in Physics for 2016 has been divided, one half awarded to David J. Thouless, the other half jointly to F. Duncan M. Haldane and J. Michael Kosterlitz “for theoretical discoveries of topological phase transitions and topological phases of matter.” 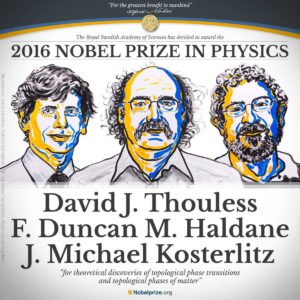 The three Laureates’ use of topological concepts in physics was decisive for their discoveries. Topology is a branch of mathematics that describes properties that only change step-wise. For example when matter goes from solid to liquid to gas different phases are obvious, but materials can also undergo topological step changes which affect their electrical properties. Such changes can be seen in a superconductor, which at low temperatures conducts electricity without resistance.

These trio physicists had worked in the field of condensed matter physics and have discovered totally unexpected behaviours of solid materials. Based on their individual discoveries they came up with a mathematical framework in the field of topology to explain these weird properties.

Importance of their work:

This year’s Laureates opened the door on an unknown world where matter can assume strange states. They have used advanced mathematical methods to study unusual phases, or states, of matter, such as superconductors, superfluids or thin magnetic films. The discoveries have paved the way for designing new materials with all sorts of novel properties that have significant potential revolutionize advances in electronics and future quantum computers.Thanks to their pioneering work, the hunt is now on for new and exotic phases of matter.

Last year, Physics Nobel was awarded to Takaaki Kajita and Arthur B. MacDonald for their work with neutrinos.