From there first appearance  to beginning of 3000 BC man used tools & implements only made up of stone and so early phase of human existence has been called as Stone-Age. Based on nature of stone tools and nature of change in climate the stone age is divided into Palaeolithic, Mesolithic and Neolithic age period to study history till 1000B.c.

The Palaeolithic age has been further divided into 3 sub-ages namely:

Now, this article we shall discuss in detail the Palaeolithic or Old- Stone Age in Rajasthan and start with: 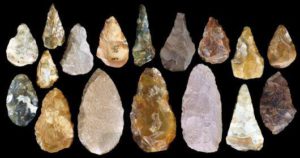