The Ochre Colored Pottery or OCP culture is defined by the type of similar Ochre Pottery found at different sites. In 1951, B.B. Lal carried out small digs at Bisauli and Rajpur Parsu villages in Bijnor district of Uttar Pradesh at spots where copper hoards had reportedly been discovered earlier. While B.B. Lal did not find any new copper objects, he came across weathered ochre-coloured pottery (OCP), and on that basis he suggested a probable correlation between the hoards and this pottery. Since then as many as 950 sites of OCP culture have been discovered from the different parts of western Uttar Pradesh, Haryana and Rajasthan.

Further, because of their discovery in groups, they have also been labelled as Copper Hoard Culture.

The highest number of the OCP sites in Rajasthan are found in the district of Sikar followed by Jaipur, Jhunjhunu, Alwar and Bharatpur. 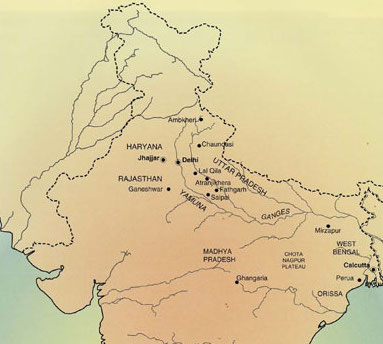 In Rajasthan, Ochre Colored Pottery sites have been discovered at: