The Nobel Peace Prize for 2016 has been awarded to Colombian President Juan Manuel Santos for his efforts to end his country’s 50-year civil war. Mr Santos negotiated a peace agreement with the Revolutionary Armed Forces of Colombia (FARC) guerrilla group but the peace deal was rejected by a narrow majority of Colombians when it was put to referendum. 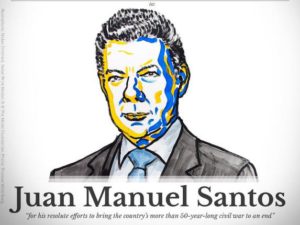