Recently, there has been NEWS about Nipah Virus outbreak in Kerala. There has been as many as 12 deaths and more than 90 people have reportedly been quarantined after showing Nipah symptoms. Precautionary advisory has been issued in other states like Maharashtra.

What is Nipah Virus

Nipah Virus is an emerging infectious disease that broke out in Malaysia and Singapore in 1998 and 1999. The infection gets its name from the village (Kampung Sungai Nipah, 1998) in Malaysia where the person from whom the virus was first isolated succumbed to the disease. It first appeared in domestic pigs and has a mortality rate of about 70%.

Nipah virus (NiV) infection is a newly emerging zoonosis that causes severe disease in both animals and humans. The natural host of the virus are fruit bats of the Pteropodidae family, Pteropus genus. 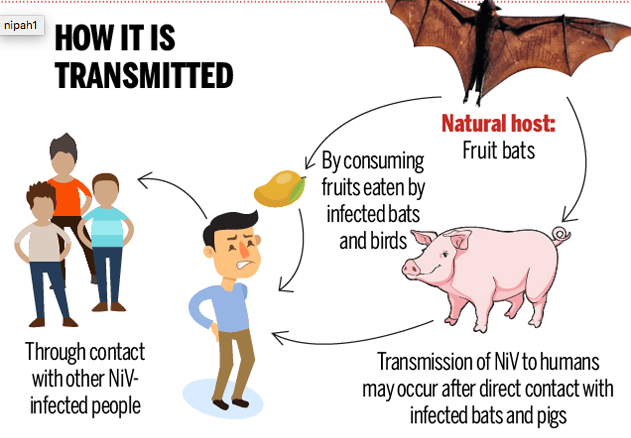 Signs and symptoms can progress to coma within 24-48 hours

There is no vaccine available for the infection, hence, preventive measures are a key to control the spread.

There is no specific treatment for Nipah Virus. The primary treatment for human cases is intensive supportive care. Hence, to avoid virus infection:

What is government doing