Memory plays a very important role in our learning and psychological growth. Through memory of our past experiences, we handle new situation it helps us in our relearning, problem solving and thinking. Since memory is central to almost all cognitive processes such as perception, thinking and problem solving, psychologists have attempted to understand the manner in which any information is committed to memory, the mechanisms through which it is retained over a period of time, the reasons why it is lost from memory, and the techniques which can lead to memory improvement.

The first systematic exploration of memory is credited to Hermann Ebbinghaus, a German psychologist of late nineteenth century (1885). He carried out many experiments on himself and found that we do not forget the learned material at an even pace or completely. Initially the rate of forgetting is faster but eventually it stabilises.

Another view on memory was suggested by Frederick Bartlett (1932) who contended that memory is not passive but an active process. With the help of meaningful verbal materials such as stories and texts, he demonstrated that memory is a constructive process. That is, what we memorise and store undergoes many changes and modifications over time. So there is a qualitative difference in what was initially memorised by us and what we retrieve or recall later.

Memory refers to retaining and recalling information over a period of time. It is conceptualised as a process consisting of three independent, though interrelated stages. These are:

Any information received by us necessarily goes through these stages.

Initially, it was thought that memory is the capacity to store all information that we acquire through learning and experience. But with the advent of the computer, human memory came to be seen as a system that processes information in the same way as a computer does. Both register, store, and manipulate large amount of information and act on the basis of the outcome of such manipulations. This led to development of the first model of memory, which was proposed by Atkinson and Shiffrin in 1968 and known as Stage Model of Memory.

According to the Stage Model, there are three memory systems :

Now, the question arises, how does information travel from Sensory to STM to LTM ?

As an answer, Atkinson and Shiffrin propose the notion of control processes which function to monitor the flow of information through various memory stores. Our senses do not register all the information they receive but through selective attention, only that information which is attended to, enters the STM from sensory registers. Sense impressions, which do not receive attention, fade away quickly.

The STM then sets into motion another control process of maintenance rehearsal to retain the information for as much time as required. This is done through repetition and when such repetitions discontinue the information is lost. Sometimes, there is need to hold information which exceeds normal capacity. In such scenario, another control process operates in STM to expand its capacity called as Chunking. For example, if you are told to remember a string of digits such as 194719492004 (note that the number exceeds the capacity of STM), you may create the chunks as 1947, 1949, and 2004 and remember them as the year when India became independent, the year when the Indian Constitution was adopted, and the year when the tsunami hit.

From the STM, information enters the longterm memory through elaborative rehearsals. This rehearsal attempts to connect the ‘to be retained information’ to the already existing information in long-term memory. The number of associations one can create around the new information determines its permanence.

The levels of processing view was proposed by Craik and Lockhart in 1972. They proposed that the processing of any new information relates to the manner in which it is perceived, analysed, and understood. This in turn determines the extent to which it will eventually be retained. 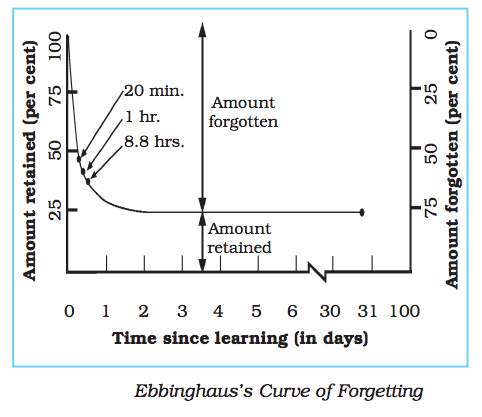 The first systematic attempt to understand the nature of forgetting was made by Hermann Ebbinghaus, who memorised lists of nonsense syllables and then measured the number of trials he took to relearn the same list at varying time intervals. He observed that the course of forgetting follows a certain pattern.

Observations:  The rate of forgetting is maximum in the first nine hours, particularly during the first hour. After that the rate slows down and not much is forgotten even after many days.

Although Ebbinghaus’s experiments constituted initial explorations and were not very sophisticated yet they have influenced memory research in many important ways. It is now upheld, almost unanimously, that there is always a sharp drop in memory and thereafter the decline is very gradual.

Forgetting due to Trace Decay

Trace decay (also called disuse theory) is the earliest theory of forgetting. This theory propounds that it is due to gradual fading of memory traces or decay that happens with lapse of time. This does not explain why certain memories fade forever while others seem to be well preserved. Passing of time cannot, therefore, be considered as the main cause of forgetting.

Forgetting due to Interference

Interference theory suggests that forgetting is due to interference between various information that the memory store contains. Interference can be proactive (forward moving) which means what you have learnt earlier interferes with the recall of your subsequent learning or retroactive (backward moving) which refers to difficulty in recalling what you have learnt earlier because of learning a new material.

Forgetting due to Retrieval Failure

Forgetting can also occur because at the time of recall, either the retrieval cues are absent or they are inappropriate. This view was advanced by Tulving and his associates who carried out several experiments to show that contents of memory may become inaccessible either due to absence or inappropriateness of retrieval cues.

There are a number of strategies for improving memory called mnemonics (pronounced ni-mo-nicks).

Mnemonics using images require that one creates vivid and interacting images of and around the material one wishes to remember. The two prominent mnemonic devices, which make interesting use of images, are:

Organisation refers to imposing certain order on the material one wants to remember. The framework one creates while organisation eases the task of retrieval.

In place of mnemonics, a more comprehensive approach to memory improvement has been suggested by many psychologists. In such an approach, emphasis is laid on applying knowledge about memory processes to the task of memory improvement. This includes:

Thomas and Robinson developed the PQRST model for remembering more. PQRST stands for five steps that need to be followed to enhance memory. These are –  Preview, Question, Read, Self-recite and Test (PQRST) 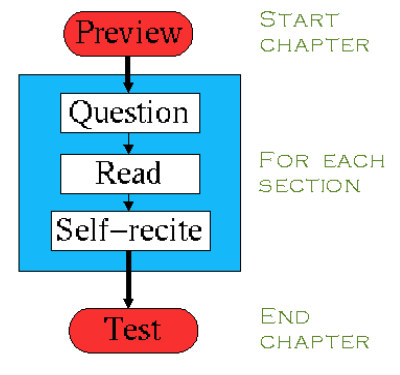