Locust attack in Rajasthan and Gujarat during 2019-20 is believed to be one of the worst in last 60 years. It has been estimated that locusts have damaged crops across an area of at least 3.6 lakh hectares in 10 districts of Western Rajasthan.

Since May 2019, farmers in western Rajasthan have been badly hit by locust attack. Locust Warning Organisation (LWO), Jodhpur, along with the district authorities are working on combating the menace by sprinkling pesticides. After damage to Kharif crop, Rabi crops are under threat of locus attacks. According to LWO, the last major locust attack in Rajasthan was witnessed in 1993. 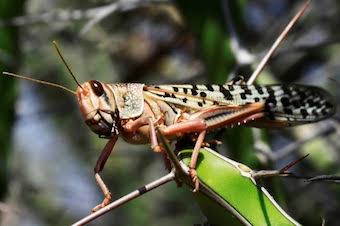 Locusts are a collection of certain species of short-horned  grasshoppers that have a swarming phase. These insects are usually solitary, but under certain circumstances they become more abundant and change their behaviour and habits, becoming gregarious.

Locusts have formed plagues since prehistory. The ancient Egyptians carved them on their tombs and the insects are mentioned in the Iliad, the Bible and the Quran. Additionally, locusts are considered a delicacy in many African, Middle-Eastern & Asian countries and eaten in abundance. They are excellent source of protein, and have a variety of fatty acids & minerals.

Lifecycle: The life cycle of locust consists of eggs, nymphs and adult. The eggs take about two weeks during favourable conditions to hatch into nymphs. Both nymphs and adults are feeders. However, the nymphs (also known as hoppers) do not have wings and become adults 30-40 days after hatching. The young adults take about three weeks before they are ready to mate and lay eggs. Adults live for three to five months.

Locust Swarm: Locust swarm can fly at speed of more than 15km/hr and cover a distance of more than 100 Km/day. These swarms can be as large as 80 million individuals.

What are Pink Locusts ?

Desert locusts have two phases, the solitary phase and the gregarious phase. Their colouring tends to be greenish or brownish to match the colour of the herbage. In the gregarious phase the hoppers bunch together and in the later instars develop a bold colouring with black markings on a yellow background. The immatures are pink and the mature adults are bright yellow and fly during the day in dense swarms.

Where do the Locusts come from ?

As per the the Food and Agriculture Organisation (FAO) of the United Nations, in January 2019, the first locust swarms left to Yemen, Saudi Arabia, and south-west Iran, where heavy rains were reported. Between February and June, widespread spring breeding in Yemen, Saudi Arabia and Iran caused the formation of large numbers of locust swarms. These swarms invaded the India-Pakistan border between June and December.

In India, the extended monsoon provided a favourable environment for the locusts to multiply.

Damage due to Locust attack

According to FAO, a swarm of locusts, which contains about 40 million insects and can eat the same amount of food in one day as 35,000 people. Locusts devour leaves, flowers, fruits, seeds, bark, & growing points and can also destroy plant be their sheer weight as they descend on them in large numbers.

Crops of mustard, cumin and wheat have been devastated in the two states, affecting lakhs of farmers. It has been estimated that locusts have damaged crops across an area of at least 3.6 lakh hectares in 10 districts of Western Rajasthan.  In 2019, after damage to Kharif crop, Rabi crops are under threat of locus attacks.

Area under attack of locust in Rajasthan

The worst-affected are Barmer and Jaisalmer in Rajasthan. As per the information put before the chief minister, the districts of Jaisalmer, Barmer, Jalore, Jodhpur, Bikaner, Churu, Sriganganagar, Hanumangarh and Nagaur are under locust threat.

Measures to Control the Locust Plague

Farmers in Rajasthan are using loud speakers and DJs during late evening and early morning to keep locusts away.

In January 2020, a team of officers of Food and Agriculture Organisation (FAO), Rome visited the locust affected areas of Jaisalmer district and witnessed the locust control activities on the field.

The the members of the Locust Control board from India and Pakistan are have conducted meetings to exchange information on the current locust situation.

Locust Warning Organisation (LWO), Jodhpur has launched efforts on a war footing to control locusts. Teams carrying equipment have been rushed to the villages to spray high-intensity malathion insecticide to prevent the spread of locusts to other areas. So far, control measures have been done on 3.70 lakh hectare affected land by spraying 2.60 lakh litre melathion.

54 teams of the Agriculture Department are surveying and monitoring the situation. The LWO has set up a helpline for farmers in the State.

On December 30, Rajasthan CM had announced to conduct girdawari (survey) for the assessment of loss caused to crops due to locust attack in Western Rajasthan.

However, farmers are unhappy with compensation norms. As per norms, compensation is given to farmers who have lost at least 33% or more crops due to locust attacks. The damaged crop of entire village, hamlet or panchayat, and not for an individual farmer, is taken into account for calculating 33%. Additionally, there is news that the government will pay compensation for only about two hectares of land. The government should, instead, check damaged areas of individual farmer’s cultivated area for compensation purposes.