The idea of ‘Law’ as guide to human conduct is as old as the existence of the civilized society. However, the concept of law is not static. With the changes in the society, the concept of justice changes and accordingly laws also change. Justice & correspondingly ‘law’ is an evolutionary concept.

Justice and law are closely inter-related. Law acts as means of serving Justice. Bentham argues that purpose of Law is Justice and without an element of justice, Law becomes an instrument of oppression. In the legal sense, justice is process of application of law to particular cases.

Though law and justice are intimately connected with each other, there is difference between the two. Law seeks to give justice, but law is not justice. The modern courts of law provide legal and not moral justice.

As the meaning of justice changes from time to time, society to society. Law can be defined by its basis (nature, reason, religion or ethics), by its sources (customs, legislation), by its effect on the life of the society and by the ends that it seeks to achieve. Hence, there in no Universal definition of Law. However, some of the important definitions of Law given by various thinkers: 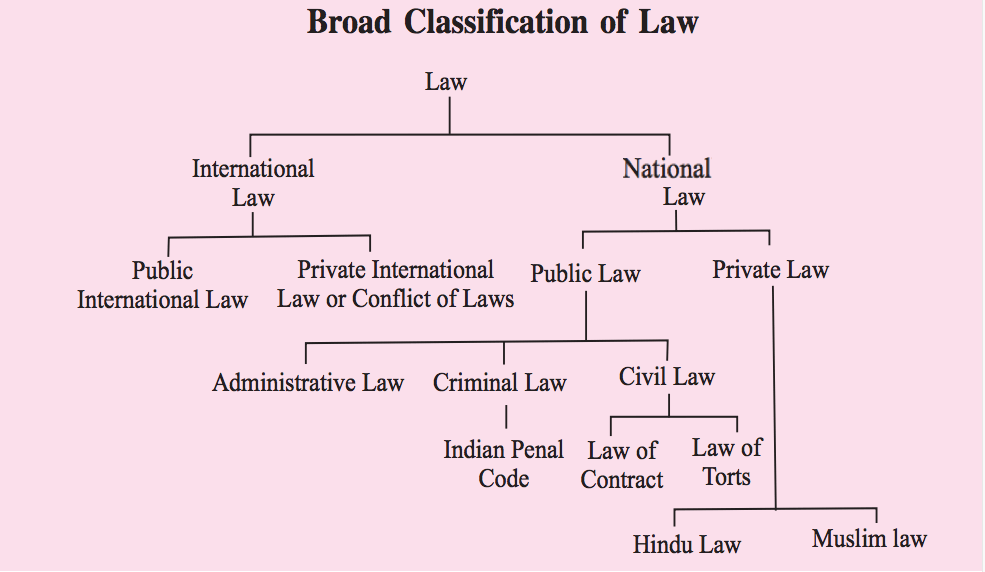 Law which is applied within a State. It can be of multiple types:

This branch of law regulates and governs the relations of citizens with each other. It includes Personal Law e.g. Hindu Law and Muslim Law.

‘Source of law’,  means the source from where laws applicable in certain society derive legal force of binding character.