India completed its nuclear triad by inducting the first indigenously built strategic nuclear submarine INS Arihant into service. It was formally commissioned by Navy Chief Admiral Sunil Lanba in August, 2016. With this, India has become 4th country in world to have status of ‘nuclear triad’ power, after the US,  Russia, China (*)

What is Nuclear Triad?

In simple terms, a ‘nuclear triad’ power is a country that has the capability to launch nuclear weapons from land, air and sea. Technically, a nuclear triad refers to the nuclear weapons delivery of a strategic nuclear arsenal which consists of three components:

The purpose of having a three-branched nuclear capability is to significantly reduce the possibility that an enemy could destroy all of a nation’s nuclear forces in a first-strike attack, this, in turn, ensures a credible threat of a second strike, and thus increases a nation’s nuclear deterrence.

In simple terms, Nuclear Triad status will help to prevent use of Nuclear Weapon against India, in case of War. How?

Well, in case of war, if any enemy drops Nuclear bomb on India or it launches Nuclear missile against India, it knows that, because India is nuclear triad, it can also launch nuclear weapons from sea and thus enemy state would also be eventually destroyed. This prevents use of nuclear weapons and hence, triad is called as Nuclear Deterrence.

This Second Strike capability is particularly important for India as it had committed to a ‘No-First-Use’ policy as part of its nuclear doctrine.

Conventionally, Submarines are powered by diesel, so they need oxygen for burning this diesel fuel. Hence, they need to come up to surface again and again for taking oxygen. This hinders their stealth capability and increases probability of spotting. Unlike conventional submarines, a nuclear submarine:

Apart from Arihant, India currently operates Russian-origin nuclear-powered submarine INS Chakra, which it leased for 10 years from Russia in 2012. 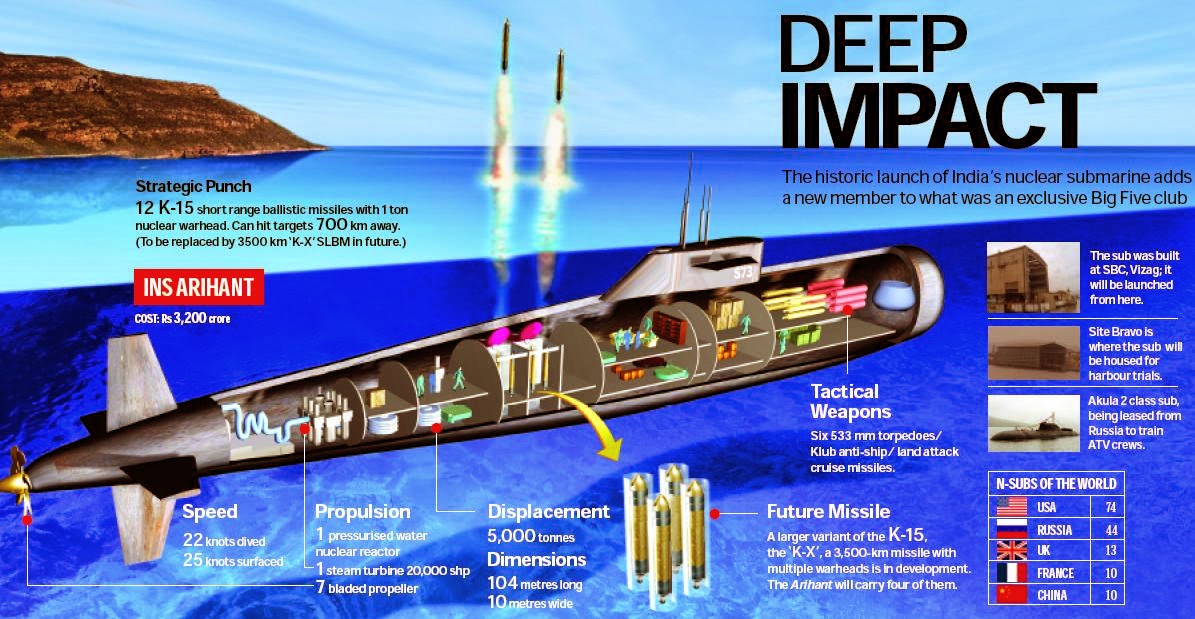 Well the Issue is: