This article briefly describes the important historical places of Baran: 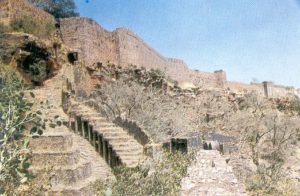 Shahabad fort is one of the strongest fort in Hadoti area. It is located at about 80 km. from Baran. Shahbad fort was constructed by the Chauhan Vanshi Dhandhel Rajput Mukutmani Dev in the 1521 A.D. (Samvat 1577). This is situated in the dense forest area on the high mountain ranges and is surrounded by Kundakoh valley, waterfalls and a lake. The Topkhana (artillery) has Nawalbaan tope(cannon), Barudkhana and some temples in the forts are still secure.

Shergarh fort is situated in Atru tehsil, about 65 km. from Baran district headquaters. The fort is located atop a hillock on the bank of Parban river. Shershan named the fort as Koshvardhan. A stone edict of 790 AD proves the antiquity of the place.

Sitabari is situated in Kelwara kasba on National Highway road connecting Shivpuri- Gwalior. The place has mythological significance and worshipped as the area where ‘Sita mata’ lived after being left-out by Lord Rama. This place is also known as the birthplace of Lav & Kush. There are several Kunds in Sitabari namely Balmiki Kund, Sita Kund, Laxman Kund, Surya Kund, Lav-Kush Kund. Sita-Kuti is also situated in the forest area near the temple. The tribal Sahariya fair is held at this place in the May/June every year.

Ramgarh-Bhand Devra temples are situated about 40 km. from Baran. The Shiv Mandir of Ramgarh was built in 10th century on the Khajuraho style. Due to the Maithun Statues, the place is named as Bhand Devra. This temple is situated on the bank of pond and is now under the Archaeological department. This temple is known as Rajasthan’s mini Khajuraho. the best way to reach the temple is by a jeep or car.

The fort is about 73 km. from Baran in Kishanganj tehsil. Fort is an impressive structure in red stone and a fine example of the Mughal architecture.

Bilasgarh is situated in Kishanganj tehsil. Bilasgarh was the big city during the Khechi kingdom which was destroyed to ruins by the order of Aurangazeb.

It is said that the daughter of the king Khechi was very beautiful and for her Aurangazeb send his force and ruined the city Bilasgarh. The princess ended her life in the ‘Bilasi’ river, the spot is now known as Kanyadeah. The ruins of the Bilasgarh is still situated in the lonely place inside dense forest area.

Kakoni is situated at a distance of 85 km from Baran city. The place is located on the banks of River Parban and is surrounded by Mukundra mountain range. It is believed that the temples located here were built in the 8th century and are believed to be the remains of Vaishnav, Shiva and Jain temples. Most of the statues of this temple are kept in the museums at Kota and Jhalawar. The place came under the ownership of archaeology department in 1970.

Named after the sun god, Suraj Kund is surrounded by verandas on all sides. A place of great religious importance, Suraj Kund is visited by tourists for a variety of reasons— from offering their respects to religious deities to immersing the ashes of late relatives in the water that flows out of the Kund, and more. In one corner of the Kund, a Shivling has been placed and devotees flock to pay their respects.

Sorsan Mataji temple, also known as Brahmani Mata Mandir is located at a distance of 20 km from Baran in Sorsan village. The temple houses a special oil lamp, ‘Akhand Jyot’ which, if stories are to be believed, has been burning uninterrupted for 400 years! Every year, on Shiv Ratri, a fair is organised in the temple premises.

A grand fort located near Chhabra, located 65 km from Baran is a must-visit tourist spot.