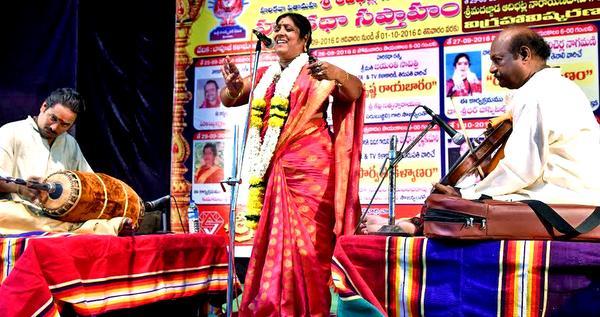 Harikatha, the traditional art of story-telling in South-India has been in NEWS recently, on account of recent revival.

Story telling is a popular performing art in India. Each region has developed its own style and tradition of story telling in various regional languages combining musical compositions between the narrations. Epics and Puranas (ancient stories of wisdom) in Sanskrit are the common story material for all or most of the regions of India.

Harikatha is an art form composed of storytelling, poetry, music, drama, dance, and philosophy. Harikatha involves the narration of a story, intermingled with various songs relating to the story. Usually the narration involves numerous sub-plots and anecdotes, which are used to emphasise various aspects of the main story. The main story teller is usually assisted by one or more co-singers, who elaborate the songs and a Mridangam accompanist.

Harikatha was once a popular medium of entertainment, which had helped to transmit cultural, educational and religious values to the masses. It was famous in South India especially in villages of Andhra Pradesh, Karnataka and Tamil Nadu.

Maratha rule was established in 1676 AD in Tanjavur, Tamilnadu. With the advent of Maratha rule, due to the influence of famous saints, Marathi kirthan was introduced in Tanjavur. Conseqnutly, The Tanjavur style of story-telling developed as a synthesis of the Tamil and Maratha style, got established around the 1850s and was popular for about a hundred years, till around the 1960s. This synthesis of art of storytelling is called as Harikatha.

This Tanjavur tradition of Harikatha also  influenced the story traditions of the other States viz., Andhra Pradesh, Karnataka and Kerala.