A new web portal “Nakshe” was launched by the Union Minister for Science & Technology and Earth Sciences, Dr. Harsh Vardhan in New Delhi today, on the occasion of 250th anniversary of Survey of India(SoI).

Nakshe Portal, a web-application developed by SoI, in association with NIC Uttarakhand State Unit – will provide free download of Survey of India’s topographic maps of the entire country in PDF format to Indian citizens. The topographic maps  are on the scale of 1:50,000, contain natural and man-made geographical features including terrain or topography.

Users can download around 3,000 opens series maps from the portal. The maps would be made available free through Aadhaar-enabled user authentication process in line with the Digital India program of the government.

Topographic maps or Open Series Maps (OSM) containing natural and man-made geographical features including terrain or topography are prepared by the SoI since its inception in 1767 and is in conformity with the National Map Policy-2005.

Why These Maps Are Important? 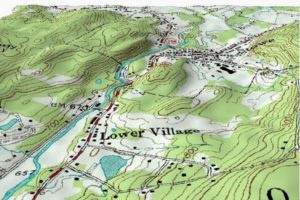 Survey of India has created these maps using gravity-based mathematical formula, so that elevation of a particular area is calculated, using GPS data. This is known as IndeGeoid (Geoid model of India), using which engineers and architects can do wonders; and absence of this data was considered as a major obstacle for starting major projects. Using these maps, height of any structure can be found with a accuracy of 30 cm. By 2018, this accuracy would be precise by 10 cm.

You will receive a consent pop-up, which says: “I, the holder of Aadhaar number , hereby give my consent to Survey of India to obtain my aadhaar number, name, address and contact number for authentication with UIDAI. Survey of India has informed me that my identity information would only be used to ensure the compliance of policies of Government of India for data dissemination.”

Once you agree to this disclaimer, the user will be presented with a dashboard, wherein he can search the particular geographical area, and download the desired map.

However, just before the download starts, another disclaimer pop-up is presented, which states: “The pdf maps downloaded from this site shall not be copied to pass on to other user or commercialized. Users can use the map for their studies, researches and development projects. Export, Commercialization, alteration and any kind of illegal practices are not allowed in these pdf OSM maps. PDFs are password protected and the password is last 8 digits of the user’s Aadhar Number”.

Hence, every downloaded map is protected by a password, which is Aadhaar last 8 digits.

This is certainly one of the strongest security mechanism incorporated, for enabling downloads of Govt. information, for the common man, using Aadhaar as the platform.