Timangarh fort is situated in Masalpur village. According to prevaling believes in Samvat (Hindu Calendar) 1244 Yadhuvanshi ruler Timanpal constructed this Fort.  On all four side of this fort their exists unique sample of 5 feet wide and 30 feet high battledore atchitecture.It seems as a complete city is enclosed within fort. Market inside fort wall, flooring, garden, temples and remains of well are still available.

This fort was established during 15th Century in Kalyanpura village on a tunnel shaped high mountain range. The fort is spread over 4 Km of area,  and has a 100 feet high waterfall which directly drop water over a Shivlinga. Till last Mughal Empire, this fort remained in ownership of Yadhuvanshi. 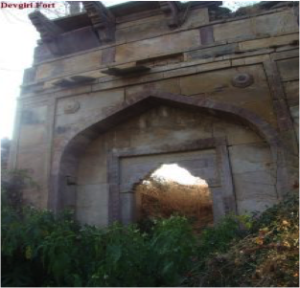 The Fort is located on east of Unt Giri on bank of Chambal River. In year 1506-07 attack of Sikander Lodhi caused major damage to this fort. In present it has one Bavdi, ransacked stone scriptures and few remains of palace are available.

In south of Karauli, on the bank of Chambal River and between the mountain ranges, Mandrayal fort made of red stone is situated on a small hill. Due to its location near Gwalior, from the view of a monument it is considered important. The Surya Pol of Fort receives direct sunlight starting from sunrise to sunset. In year 1327 Maharaja Arjun Dev had acquired this fort, which remained under custodianship of Karauli.

This fort is located on Mundrayal Route, near forest of Sasand Village and deserted environment. ‘Bahadurpura Ka Quilla’ stands like an insuppressible warrior is an actual example of inseparable Mughal art. Double storied Narp Gopal Bhawan, Saheliyon Ki Bavdi, Artistic Jharokha, 18 feet long girder of common and VIP courts, 5 warriors, Magadh Rai Ki Chatri are worth watching. The fort was constructed by Nagraj was son of Yadhuvanshi King Timanpal, expansion of this fort was done throughout 1566 to 1644. Ruler of Jaipur Sawai Jaising also resided in this fort.

The Ramthera fort is Situated in Sapotara Subdivision of Karauli district between Ranthambore Wildlife Sanctuary and Bharatpur Bird Reserve; it is just 15 kilometers away from Kailadevi Sanctuary.

The Jagmandir Palace was built by one of the queens of Kota between 1743 and 1745, and is situated in the middle of the Kishore Sagar Lake. Built in red sandstone, it is a monument of exquisite beauty. The palace is open to tourists who can enjoy boat rides in the Kishore Sagar Lake and the panoramic view of the palace from the lake. The Keshar Bagh, situated near the Jagmandir Palace is well known for its royal cenotaphs.

This large complex, also known as the City Palace, is built in a predominantly Rajput style of architecture. The palace is a sprawling complex of suites and apartments built by different rulers of the Rajput dynasty at different times in history.

Situated within the walls of the Garh palace is Maharao Madho Singh Museum which houses a splendid collection of Rajput miniature paintings of the Kota school.The exquisite sculptures, frescoes and murals present a breathtaking view.

It is said that Nagaur fort was initially built by ruler of Nag dynasty in 2nd century and was then rebuilt in the early 12th century. This fort has witnessed several battles and has also been altered multiple times. Being one of the first Mughal strongholds in North-India it is an outstanding example of Rajput-Mughal architecture.

It is said that the Nagaur fort was initially built by the ruler of the Nag dynasty in 2nd century, and this 500 year old fort, located on the eastern edge of the Thar Desert was built in about 1523. Mughal Emperor Aurangzeb used to stay at this fort. Black deer roam in herds around this fort.

Kuchaman Fort is the oldest & most inaccessible forts of Rajasthan. Situated on top of a straight hill, it possess unique water harvesting system, a beautiful palace and stunning wall paintings. The rulers of Jodhpur used to mint their gold and silver currency here.

Devgarh is located in Pratapgarh sub-divsion on a small hill. It is also known as “Devliya”. This palace is surrounded by small hills and situatated at average elevation of 1809 feet from sea level. Rajmahal, old Bawadia,  Jain temples are located in Devgarh. A famous temple of “Beejamata” is also situated here, where a fair takes place every year.
A temple of lord Raghunath is placed in Rajmahal itself, where a solar clock is placed on the top of it. The clock tells time according to the light of sun.  The Palace and its vicinity also contain some ponds including Tejsagar and Sonela.

The Kumbhalgarh Fort was built by Rana Kumbha between A.D. 1443 and 1458 on the site of a still older castle which tradtion ascribes to Samprati, a Jaina prince of the second century B.C.  It is the second most important fort of Mewar after Chittaurgarh.  It is defended by a series of walls with battlements and bastions built on the slope of the hill which is reached through seven great gateways viz. Aret Pol, Halla Pol, Hanuman Pol, Ram Pol, Nimboo Pol, Bhairon Pol.  Among important temples are those of Mahadeva, Pitaliya Dev, Neelkantha, etc.  Bawan Devri and Golerao temples (nine in numbers) are Jaina temples.  The most important building, though of later period, is the Badal Mahal or Cloud Palace. 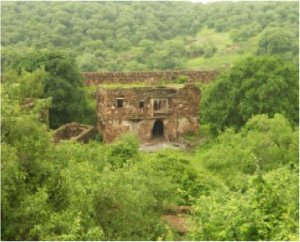 Ranthambore Fort was built by the Chauhan rulers in the 10th century. It has been declared a UNESCO World Heritage Site under the group Hill Forts of Rajasthan. The fort is characterized by temples, tanks, massive gates and huge walls. The fort is well protected by a massive fortification wall provided with stepped and Z-shaped gateway with two strong and massive doors. An architectural marvel, the fort includes  includes the Hammir Badi Kachahari, Chhoti Kachahari, Battis Khambha Chhatri, Hamir Palace, Rani Palace, Toran Dwar, Mahadeo Chhatri and Sametonki Haveli within its premises. Among temples, the Ganesa temple is important besides a few Jain temples.

The imposing Khandar Fort is a place worth visiting and is situated just 45 kms from Sawai Madhopur. Located on top of a strategic vertical hill,could never come under an easy attack and thus was truly regarded as invincible. This magnificent fortification was long ruled by the Sisodia Kings of Mewar after which it was taken over by the Mughals.

Laxmangarh town is a popular tourist place that is known for the Laxmangarh Fort. The fort was built on the hill in 1862 by Laxman Singh, Rao Raja of Sikar. It is believed that the foundation of the Laxmangarh town was based on the planning system of the capital city Jaipur.

Anoopgarh Fort is a ruin in the city of Anoopgarh. It was built by Anoop Singh Rathore.

City Palace, Udaipur, was built over a period of nearly 400 years, with contributions from several rulers of the Mewar dynasty. Construction began in 1553, started by Maharana Udai Singh II of the Sisodia Rajput family as he shifted his capital from the erstwhile Chittor to the new found city of Udaipur.

Now a hotel, The Lake Palace was originally called Jag Niwas Palace and served as a summer palace. Built between 1743 and 1746 on the island near Jagmandir Palace in Lake Pichola, the palace, which faces east, is a wondrous sight to behold. The walls made of black and white marbles are adorned by semi-precious stones and ornamented niches. Gardens, fountains, pillared terraces and columns line its courtyards.

Jag Mandir is a palace built on an island on the Lake Pichola. Also called the ‘Lake Garden Palace’, the construction for this began in 1551 and was completed around 1652. The royal family used the palace as its summer resort and for hosting parties. Interestingly, Prince Khurram – later Emperor Shah Jahan – was given shelter here when he rebelled against his father Emperor Jahangir. The palace had such an impact on Emperor Shah Jahan that it went on to become the inspiration for one of the most magnificent Wonders of the World, the Taj Mahal.

This 19th century palace is built by  Maharana Sajjan Singh on top of Bansdara Mountain. Built with white marble, the palace offers a panoramic view of the city’s lakes, palaces and surrounding countryside.