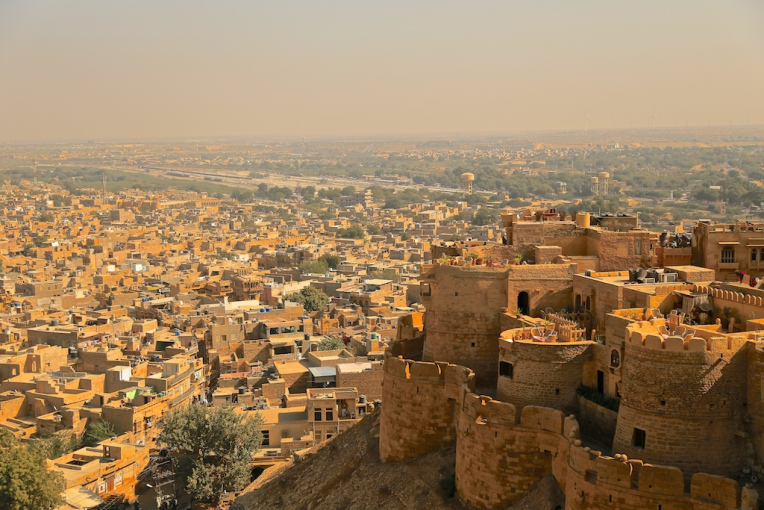 The first Jauhar of Jaisalmer occurred in year 1294, when Allauddin Khilji, attacked Jaisalmer and laid a siege for almost eight years.

Rawal jaitsi ascended the throne of Jaisalmer in 1276. The tribute of Tat’ha and Mooltan consisting of fifteen hundred horses and fifteen hundred mules laden with treasure and valuables was at Bekhar in progress to Allaudin Khilji at Delhi. The sons of Jaitsi, raided and captured the carvan. The king was outrage when the news reached him and ordered an expedition against Jaisalmer.

Preparing for the war, Rawal Jethsi sent the children, elderly and sick  to refuge into the interior of the desert. He build up a massive store of food within the fort, while destroyed the country around the capital, laying waste miles of area and made many towns desolate.

Alauddin laid siege to the fort. According to local ballads, the Bhatis defended the fort for almost 8 years during which the forces left outside of the walls occupied themselves attacking the supply lines of the Khilji’s troops. During the siege, Rawal Jaitsi died and was succeeded by his son Mulraj II. By 1294 the besiegers had received sufficient reinforcements that they were able to impose a complete blockage of the fort which soon exhausted the Bhati’s ammunition and food.

By 1294, ammunition and food had exhausted in Bhati camp and facing certain defeat, queens were informed. 24,000 females from infancy to old age surrendered their lives. The men 3,800, in number then threw open the gates of the fort and advanced to their death.

The Saka took place in 1295 A.D. Khilji’s army kept possession of castle for two years and at length blocked up gateways and then dismantled and abandoned the place. The place remained deserted for long as Bhattis had neither the means to repair nor men left to defend it.