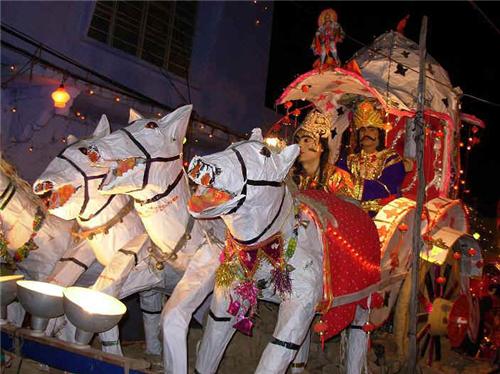 This article briefly describes the important festivals & fairs of Baran:

Dolmela is organised at the Dol Talab (Pond) in the Baran city from Jaljhulni Akadshi. The main attraction of this festival is a big Shobha Yatra (procession) which have about 54 Dev Viman (The Holy Statue Carriers) which is also known as DOL, of all the major temples of the city. In this procession some Akhadas also demonstrates their Kartab (type of physical exercise). The procession started from Shreeji temple comes to the Dol Talab where all the Dev Vimans are worshiped and then these are sent back to the respective temples. This fair is organised for 15 days which is very popular among the local residents as well as the residents from the Rajasthan state. People from adjoining Madhya Pradesh also visit for this fair. This fair is the symbol of communal harmony in the area.

Sitabri is located near Kelwara kasba, about 45 km from the Baran city. A tribal fair is organised here on Jeshta Amavasya and is attended by Sahariya tribe in large numbers. Hence, it is also considered as Kumbh in the Sahariya tribe. The Swyambar (marriage function) of Sahariya tribes is organised in this fair where people comes from all over Rajasthan state and adjoining Madhya Pradesh A Sahariya boy drops the handkerchief for proposing Sahariya girl in the fair, if the Sahariya girl accepts the Handkerchief, it is said that they are agreed for marriage. The bride and grooms take the 7 rounds (sat phere) of the Barnawa tree and after the blessings of their parents they are accepted as married couple. This fair is also called animal fair where good varieties of Cow, Buffalo etc. selling-purchasing are made.

Phuldol is the one of the oldest folk festival of the Rajasthan state. The festival is organized yearly in the Kishanganj town on the occasion of Holi.  As a part of tradition groom visits in-laws home with his friends to play Holi.  On the day of Holi-Dulandi, lots of Swang (type of drama) is played. Some of the famous swangs are Gidh-Rawan-Yudh, Band-Bandi swang etc. In the night big ‘Shobhayatra’ known as ‘PhulDolo’ is taken out in the town. Lots of people from nearby places come to witness the festival.

Brahmani Mata fair is organized in the old fort near Sorsan. The fair is organized on Magh-Shukla-Saptmi and is the only Donkey fair in the Hadoti region where donkey and kachhar are bought-sold in large numbers.