Female foeticide is the abortion of a female foetus, after sex determination test, outside of legal methods. Female foeticide has been linked to the arrival, in the early 1990s, of affordable ultrasound technology and its widespread adoption in India. By one of the estimate since 1990, more than 10 million female fetuses may have been illegally aborted in India  and 500,000 girls were being lost annually due to female foeticide. 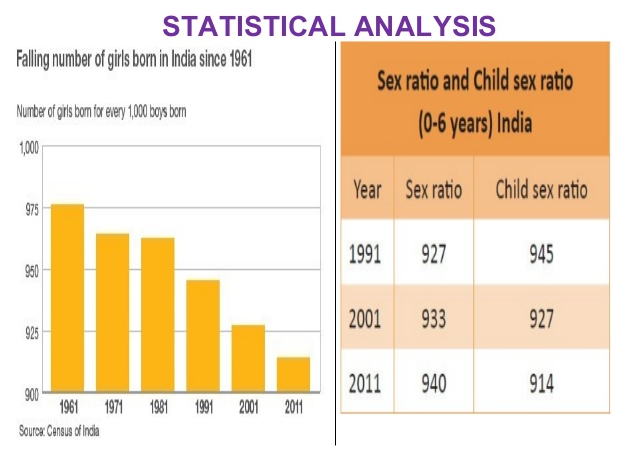 Female foeticide is commonly practiced across the Rajasthan and female infanticide is also common especially in districts like Jaisalmer. The archaic social structure has always given preference to males over females in the state. Unit recent times, the state had high maternal mortality rate of 445 per 100,000 live births. The birth of a girl child meant bad news, this was mainly due to the hefty dowry system prevalent in the state.

A countrywide study conducted by Sabu M. George, revealed that the ultrasound machines were luring even the tribal population in the States like Rajasthan. As a result of that a steep decline of over 75 points in sex ratio at birth has been reported during a period from 1991-2001 in urban areas of Ganganagar, Banswara and Sirohi in Rajasthan.

The child sex ratio is an important indicator of discrimination against the girl child, whereas the sex ratio in the entire population is a key indicator of serious societal problems at large, especially gender discrimination over the life cycle of an infant girl, the girl child, the adolescent girl and the woman. Since, for biological reasons, women in all societies live longer than men; the natural expectation is that the share of women in the population will be larger than 50%. However, the child sex ratio (number of females for every 1,000 male children in 0-6 age group) dropped from 954 in 1981 to 888 in 2011.

Child sex ratio has shown a marked improvement in 2015. According to government figures, the child sex ratio has jumped 37 points in 2015 reaching 925 as against 888 by the 2011 Census in the 0 to 6 age group. However, Female foeticide is still prevalent in border districts of Rajasthan which leads to declining sex ratio. Jaisalmer is still of those districts where number of girls is less compared to boys. Last year, the number was 925, which has fallen drastically to 888 per 1,000 boys in November this year.

Female foeticide: What is to be done: