Pushkar Fair is one of the largest cattle fairs in the country which is held every year at Pushkar on Kartik Poornima (Full Moon, Oct-Nov). Apart from the buying and selling of livestock, it has religious significance  become an important tourist attraction. Competitions such as the “matka phod“, camel races, parades, “longest moustache”, and “bridal competition” are the main draws for this fair which attracts thousands of touristsThe 12 day affair has a religious significance too. Hundreds of horses, camels and buffaloes are brought here to be sold. Vendors sell handlooms, snacks sweetmeats, ice crushes, Bangles, Camel Saddles etc.  The entire town comes to life with men wearing colourful turbans and women clad in gorgeous odhnis. With the setting of the Sun, the atmosphere resounds with bells ringing and worship is called ‘Deepdaan’ and the entire lake is illuminated with floating lights . The view is mesmerizing not just at the lake, market but also at the sandunes of thar & camel safari.

Ajmer Urs (death anniversary) is the largest Muslim fair in India where thousands of devotees pilgrimage for the Sufi saint Khwaja Moinuddin Chishti at the dargah of the saint in Ajmer. The Urs celebrations continue for six days, commencing with the hoisting of a white flag on the tomb by the Sajdanashin (successor-representative) of the Chishtia order. Over the following days, the tomb is ritually anointed with rosewater and sandalwood paste; qawwalis are sung and poetry recited in praise of the Almighty,  to create an atmosphere of brotherhood and happiness amongst people of different backgrounds.

At the time of the Urs, a busy bazaar springs up at the foot of the dargah. Flowers, embroidered prayer rugs, prayer caps and decorative chadars are among the many things to be found in the bazaar, apart from the usual souvenirs which make their way to fairs such as this.Further, in the exteriors of the dargah surrounds, one may also come across two giant cauldrons cook sweet rice seasoned with condiments and dry fruits to be dished out as sanctified food or ‘tabarukh’ 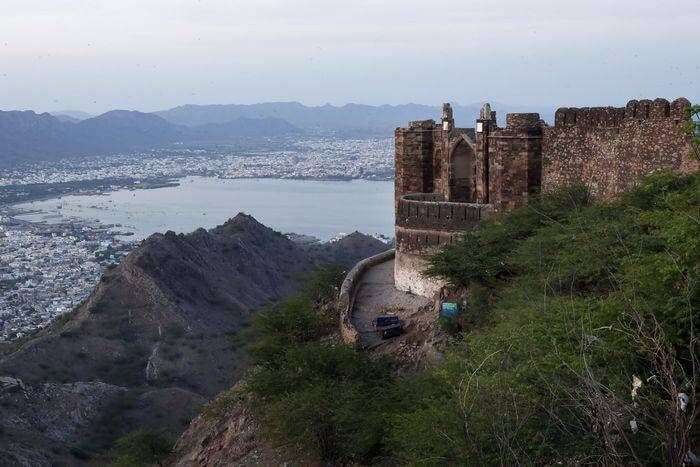