The Rajputs dominated political development of northern India after the death of Harshavardhana. .Many Rajput kingdoms were established in Northern India from 647 CE (Death of Harsha) to 1192 CE (Battle of Terāin between Mohd.Ghori and Pṛithvī Rāja Chauhāna). This period (647-1192 CE) is called the “Rajput Age” in the history. Gahadavālas of Kanauj, the Paramāras of Mālavā, Chauhāna of Ajmer, Kalachuris of Chedi, Chandellas of Bundelakhanḍa, the Chālukya of Gujarat and the Tomaras of Delhi, Guhils of Chittor etc were some of the major states. 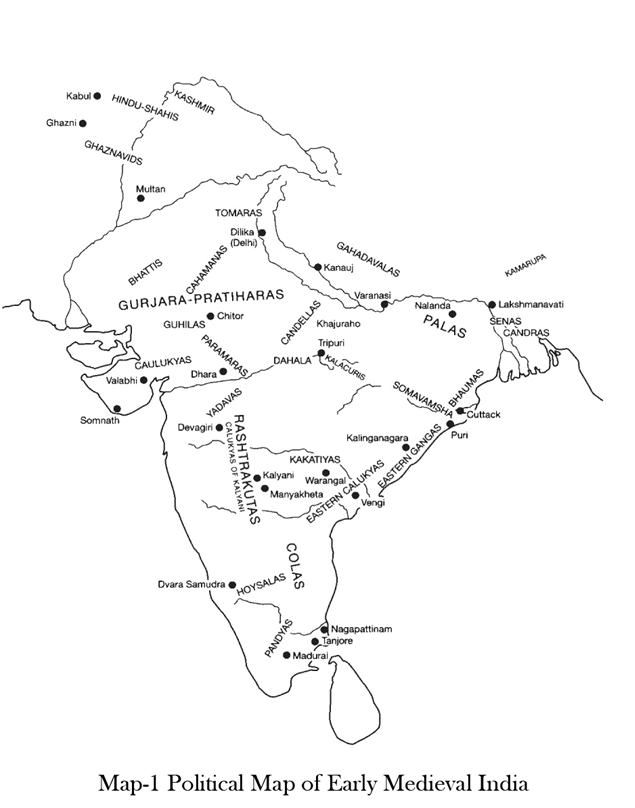 The Rajput political structure was based on clan ties. The Raja stood at the apex of the hierarchy, but he ruled with consent of his clan members. Each clan constituted a ruling elite (referred to as Samanta ) and heads of sub clans constituted the nobility. Each clan member considered himself entitled to the same right to rule the Kingdom as the Raja. They were independent to rule the area under them, were competent to impose taxes as per their will, and could collect them. They had the administrative and judicial powers in their areas.

Though the Raja’s sovereignty was accepted, chiefs of ruling clans treated him as the primus- inter-pares. This put a check on the power in the hands of the Raja. Under the practice of bhai-bant, territories conquered by the kith and kin of the Raja, became their thikanas. The Raja could not afford the luxury of alienating the clan members as they wielded immense authority in matters of succession, especially since there was no rigid law of primogeniture.