A Snapshot of different diseases, their causes, the vectors who transmit these diseases and vaccines available against them. 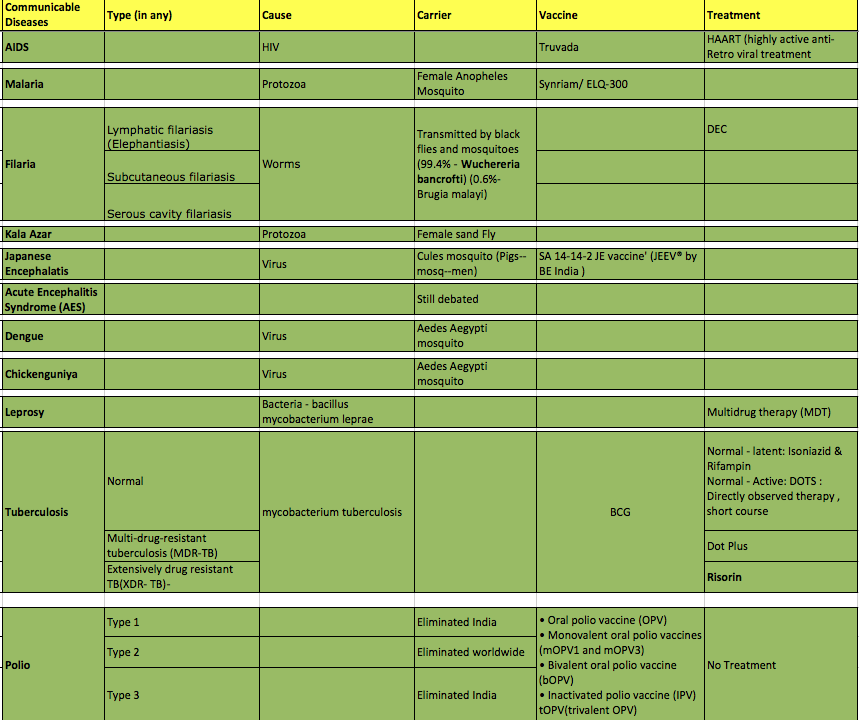 Transmission
Ebola is introduced into the human population through close contact with the blood, secretions, organs or other bodily fluids of infected animals. In Africa, infection has been documented through the handling of infected chimpanzees, gorillas, fruit bats, monkeys, forest antelope and porcupines found ill or dead or in the rainforest.
Ebola then spreads in the community through human-to-human transmission, with infection resulting from direct contact (through broken skin or mucous membranes) with the blood, secretions, organs or other bodily fluids of infected people, and indirect contact with environments contaminated with such fluids
The Ebola virus is not airborne,
EVD is a severe acute viral illness often characterized by the sudden onset of fever, intense weakness, muscle pain, headache and sore throat. This is followed by vomiting, diarrhoea, rash, impaired kidney and liver function, and in some cases, both internal and external bleeding. Laboratory findings include low white blood cell and platelet counts and elevated liver enzymes.
Those who fared best sought immediate medical attention and got supportive care to prevent dehydration even though there is no specific treatment for Ebola itself.
No vaccine as such.

While there are many different types of T-cells, these particular cells(CD4) have a specific receptor site on their surface called the CD4 receptor site. HIV uses this particular receptor to latch on to the T-cell, making it a prime target for infection.
HIV hides in a state of hibernation in CD4 cells, an essential part of the immune system. Yet CD4 cells are unable to fight HIV themselves — that role lies with the immune system’s killer T-cells.
But because killer T-cells can’t detect the HIV hidden within CD4 cells, they are unable to attack and eliminate it from the body. While HIV patients on antiretroviral drug treatment often go on to have undetectable levels of HIV in their system, it is never eliminated.

The virus: Polio is caused by a human enterovirus called the poliovirus. Wild polioviruses are those that occur naturally.

The population residing in areas below 5000 ft. of sea level is prone to malaria as these areas have potential for malaria vector breeding. It is a fact that certain tribal groups are less prone to malaria infection.
Cause: Protozoa- plasmodium – P. falciparum and P. vivax, carried by female anopheles mosquitoes.
Disease Management:

How is anthrax contracted?
Anthrax can infect humans in three ways.

Parkinson’s disease (PD also known as idiopathic or primary parkinsonism, hypokinetic rigid syndrome/HRS, or paralysis agitans) is a degenerative disorder of the central nervous system. The motor symptoms of Parkinson’s disease result from the death of dopamine-generating cells in the substantia nigra, a region of the midbrain; the cause of this cell death is unknown. Early in the course of the disease, the most obvious symptoms are movement-related; these include shaking, rigidity, slowness of movement and difficulty with walking and gait. Later, thinking and behavioral problems may arise, with dementia commonly occurring in the advanced stages of the disease, whereas depression is the most common psychiatric symptom. Other symptoms include sensory, sleep and emotional problems. Parkinson’s disease is more common in older people, with most cases occurring after the age of 50.